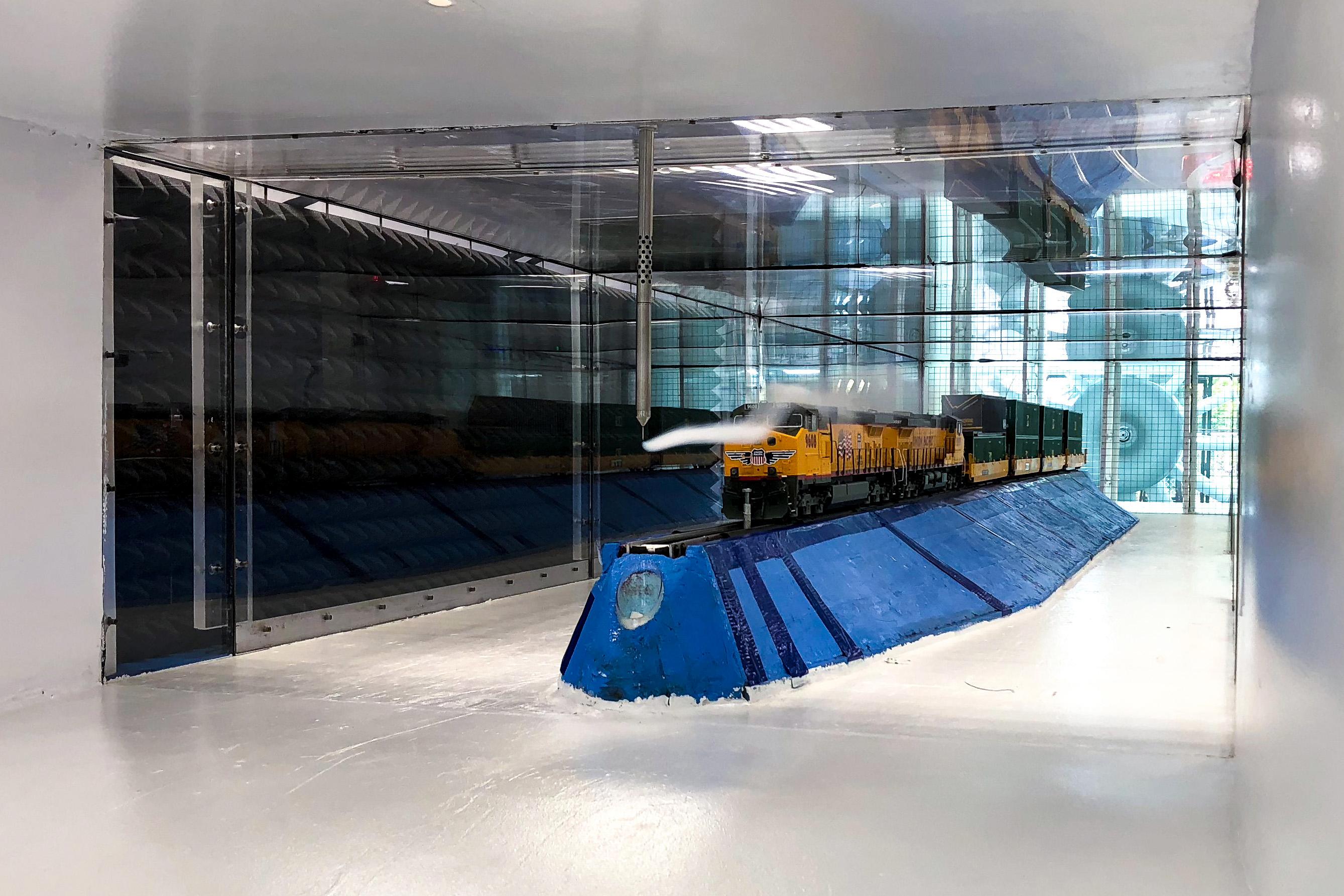 Kennedy always has gravitated toward jobs that allow him to be a change agent. As Union Pacific’s senior manager of fuel conservation, he wants to sway the behavior of a true behemoth: the U.S. freight rail industry.

“We were the first railroad to think about fuel this way,” said Kennedy, who started Union Pacific’s first fuel conservation group in 2004. “Now all the railroads are doing it. And today we’re the only railroad looking seriously at aerodynamics, which is the sleeping giant of fuel conservation.”

No existing technology will save as much money long-term as chasing improved aerodynamics, Kennedy said. “It’s really just pushing the industry toward positive change in terms of less fuel, less emissions and higher cost savings.”

Diesel fuel is Union Pacific’s largest purchased expense, accounting for about 14 percent of the railroad’s total operating costs in 2017. A 1 percent reduction in fuel use would save the company millions. It also would go a long way toward helping the company accomplish its new goal of reducing locomotive fuel consumption by 1.5 percent through 2020.

The project began 10 years ago as part of a partnership with Brigham Young University’s (BYU) engineering design capstone program. Every year Kennedy gives the program a problem to solve, and five to seven BYU students are tasked with figuring out an affordable, realistic solution. The grain car project was assigned four years ago.

“They did a great job,” he said. “They gave us a lot of things we could do differently to the existing design.” Still, Kennedy had a different challenge in mind: “What if we started over? What does the covered hopper of the future look like?”

Kennedy and Brian Davis, Union Pacific manager of system car facilities in De Soto, Missouri, first examined the grain car’s shape. “We looked for any gaps that could be easily closed off,” Kennedy said. “Things like voids or railings, whatever creates turbulence. I’m trying to see if I can somehow make these spaces a continuous plane.” 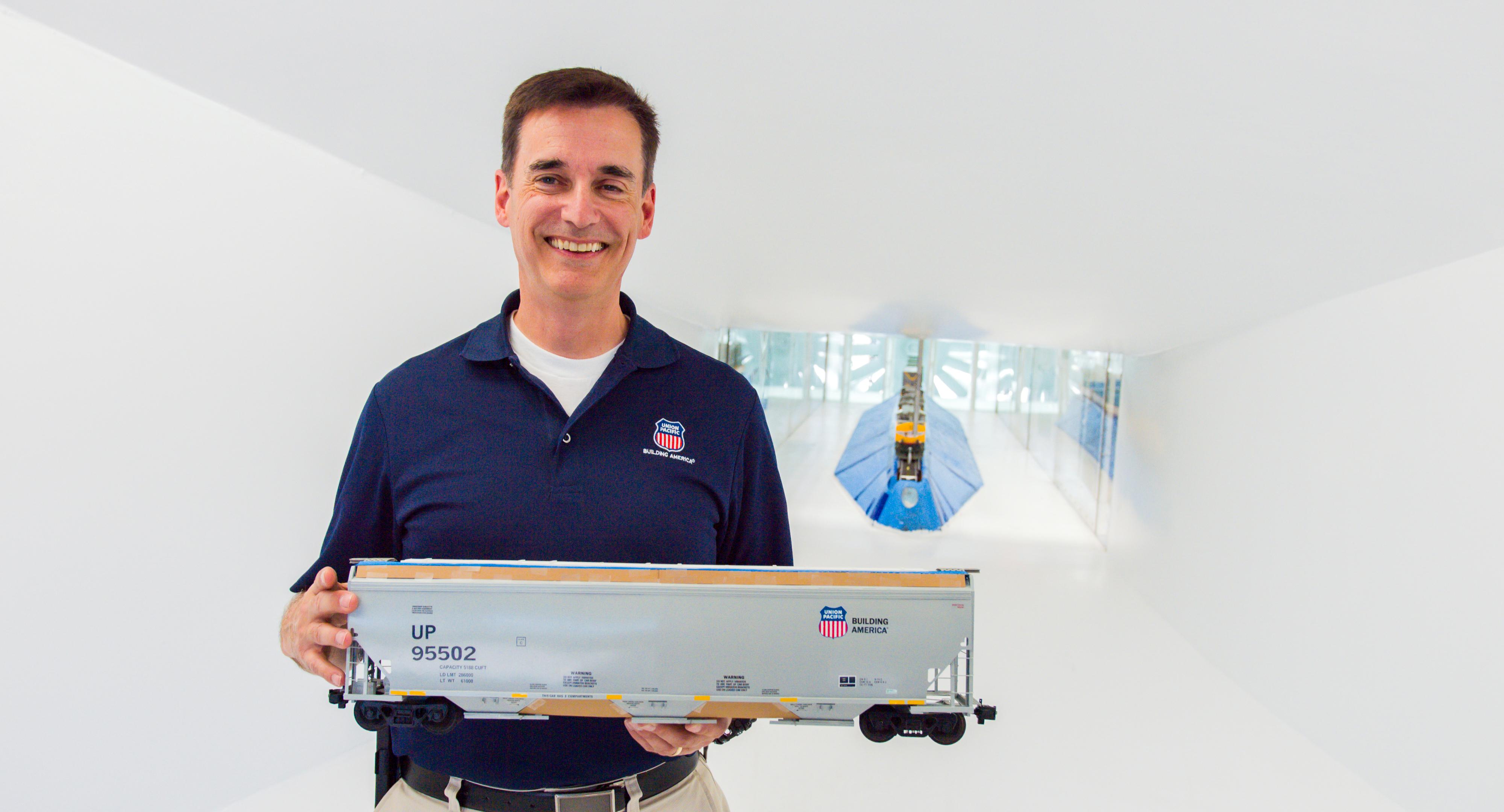 Once Kennedy identified potential shape adjustments, he took a step back to look at the return on investment involved in making the modifications.

“Which proposed modifications do we keep?” Kennedy said. “I discard a lot of ideas at this point in the process, because the modifications are too expensive and the relative reduction in drag is too small to pay for itself.”

On the grain cars, Kennedy ultimately decided to target walkway supports along the car’s roofline, and the gaps between the three upside-down pyramid-shaped dump chutes at the bottom. G-scale models of the proposed design changes were created to test inside Union Pacific’s wind tunnel.

“No other railroad has a wind tunnel,” he said. “The wind tunnel significantly accelerates our pace of discovery. We’re still working with BYU, and I hope that will be a very long-term partnership, but I can move 10 times faster now.”

Kennedy said something relatively small can create a huge amount of drag. “The Wright Flyer, the first airplane, the majority of the drag was not created by the wings; it was all the guy wires and struts that held the wings together,” he said. “The wind tunnel helps us prove that concept by measuring air velocity, temperature and barometric pressure.” 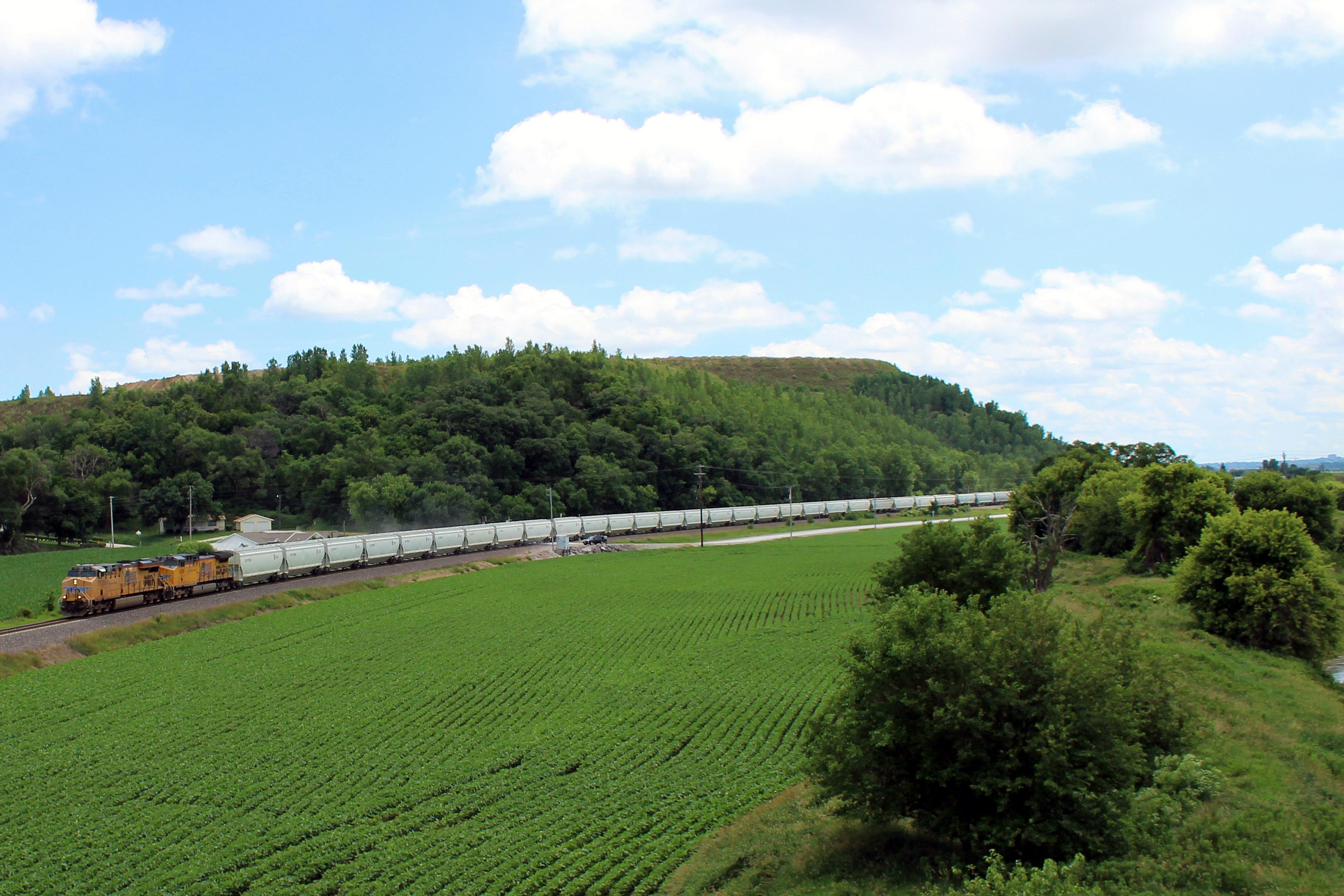 After three months and dozens of round trips, preliminary results indicate the grain car modifications provided a 4 to 6 percent fuel savings. If roughly 70 percent of Union Pacific’s 13,800 grain cars are modified, the fuel savings could be significant.

Kennedy is pleased, but eager to get started on the next modification. He says he’ll only consider his change-agent efforts successful when nearly every new rail car built is aerodynamically optimized, industry-wide.

“With the modifications we already have planned, including the covered hoppers, we already know how we can achieve millions of dollars a year in fuel savings at Union Pacific,” Kennedy said. “That’s a good start.”