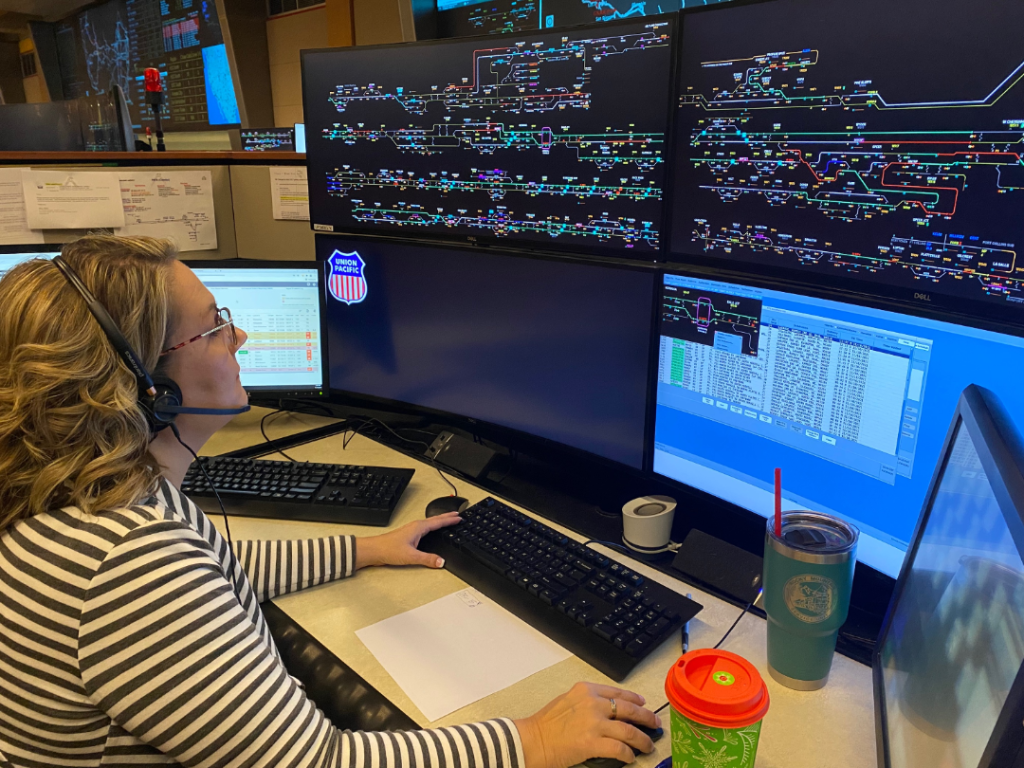 35,252 track miles made up of main track, sidings and industrial leads. It’s not just the distance you would travel to circle the Earth almost twice, it’s also the number of main line miles cut over during Union Pacific’s Computer-Aided Dispatching system (CADX) efforts – now complete.

A multiyear effort by several UP departments, CADX was developed in-house and brings numerous operational and safety efficiencies. The technology allows dispatchers to line signals and switches while issuing restrictions and authorities through the system.

“CADX finally brings critical components of the railroad into the modern era on a platform that can be supported internally for the foreseeable future,” said Gary Baker, general director,Tech.

The CADX cutover impacts multiple teams in various ways, and implementation was a team effort that included members from Tech, Positive Train Control (PTC), Signal, Operations Support Group, Operations Support, Operating Practices, and Track Data and Scheduling, along with trainers, developers and those closest to the work: train dispatchers.

“The progress we have made since UP brought CADX development in-house has been amazing to see,” said Susan Hunter, train dispatcher-Special Projects, Harriman Dispatching Center (HDC). “It allows for so much teamwork and flexibility. We have top-notch teams working together. Seeing dispatchers actually using it in production is very satisfying knowing all the hard work and history it took to get here.”

The train dispatcher-Special Projects role is designed specifically for direct CADX collaboration with Tech. By working closely with the development and business analysis teams, requirements and testing happen real time, saving time and resources during development.

Safety is the railroad’s No. 1 priority, and CADX provides several safety enhancements.

The biggest safety feature CADX has over its predecessor and others in the industry is integration with track data. This ensures protection is placed at the correct location without relying on external tools.

In the first year alone, there has been a 58% reduction in major rule violations and close calls by train dispatchers.

“With the intellectual property and control gained from building the system in-house, we can quickly and efficiently turn our focus toward additional integrations, like weather alerts and automation of crossing protection,” said Derek Wever, director-Central Dispatching System and Support, HDC. “We have the ability to use technology between Positive Train Control systems and CADX to engineer out risk and provide protection much more quickly.”

CADX Cutover by the Numbers