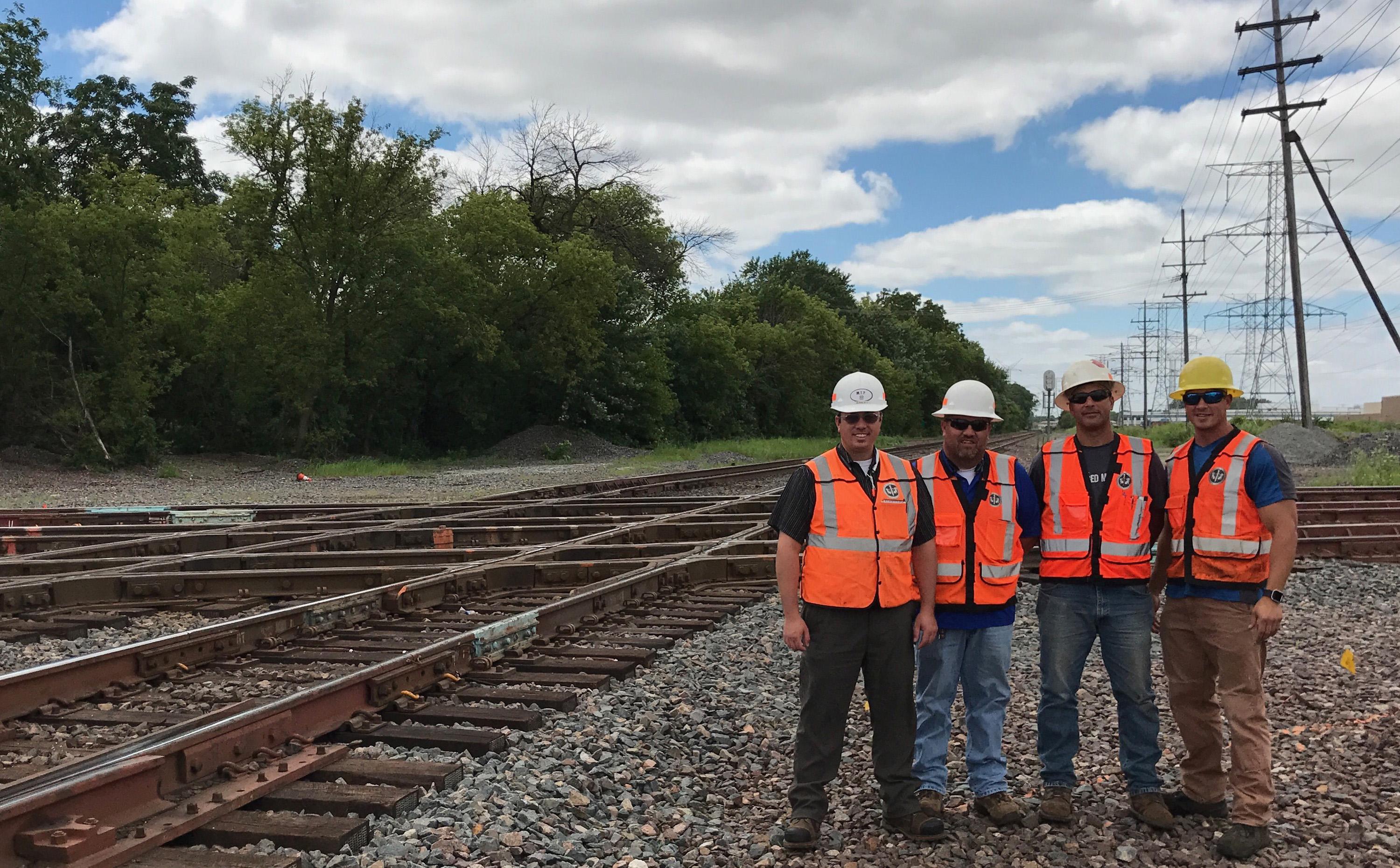 The replacement of the aging five-track Deval diamond, located in Chicago's northwest suburbs, is improving commuter and freight transit times.

"This work cuts down on the delays that occurred every time we had to do maintenance on the diamond," said Brian Bailey, Union Pacific manager of track projects. "Eliminating that maintenance increases our velocity across the diamonds, which means everyone – commuters and freight trains – will get to where they're going faster."

Through late-night hours and constant rain, about 90 Union Pacific employees worked rotating 12-hour shifts to replace the 100,000-pound diamond in a little over 48 hours. Thirteen large industrial lights made rain droplets glisten off the five track-hoes and four end-loaders used to complete the enormous task.

It took 48 hours of around-the-clock work to completely replace Chicago's five-track Deval diamond. Here's the lesson in tenacity, technology and teamwork condensed to under two minutes.

Bailey says it took about a year to gather all the materials and identify the right time to launch the $2 million project. "The team did a great job planning everything," he said.

Because this diamond allows uninterrupted commuter service to thousands of Chicagoans every day, taking it out of service for repairs wasn't easy.

Scheduling the project during the week was out of the question because commuters need to get to and from work on time. "We also looked at all the city's planned events because Chicago's such a big town," said Bailey. "There's baseball, hockey, all kinds of things. We had to find a weekend where we wouldn't affect commuters headed to a big event."

Ultimately, the team took the tracks out on a Friday night at 7 p.m., and had everything done and restored by Sunday. Metra service never stopped; it was only delayed by 30 minutes. "We coordinated with Metra so they knew about the delay," Bailey said. 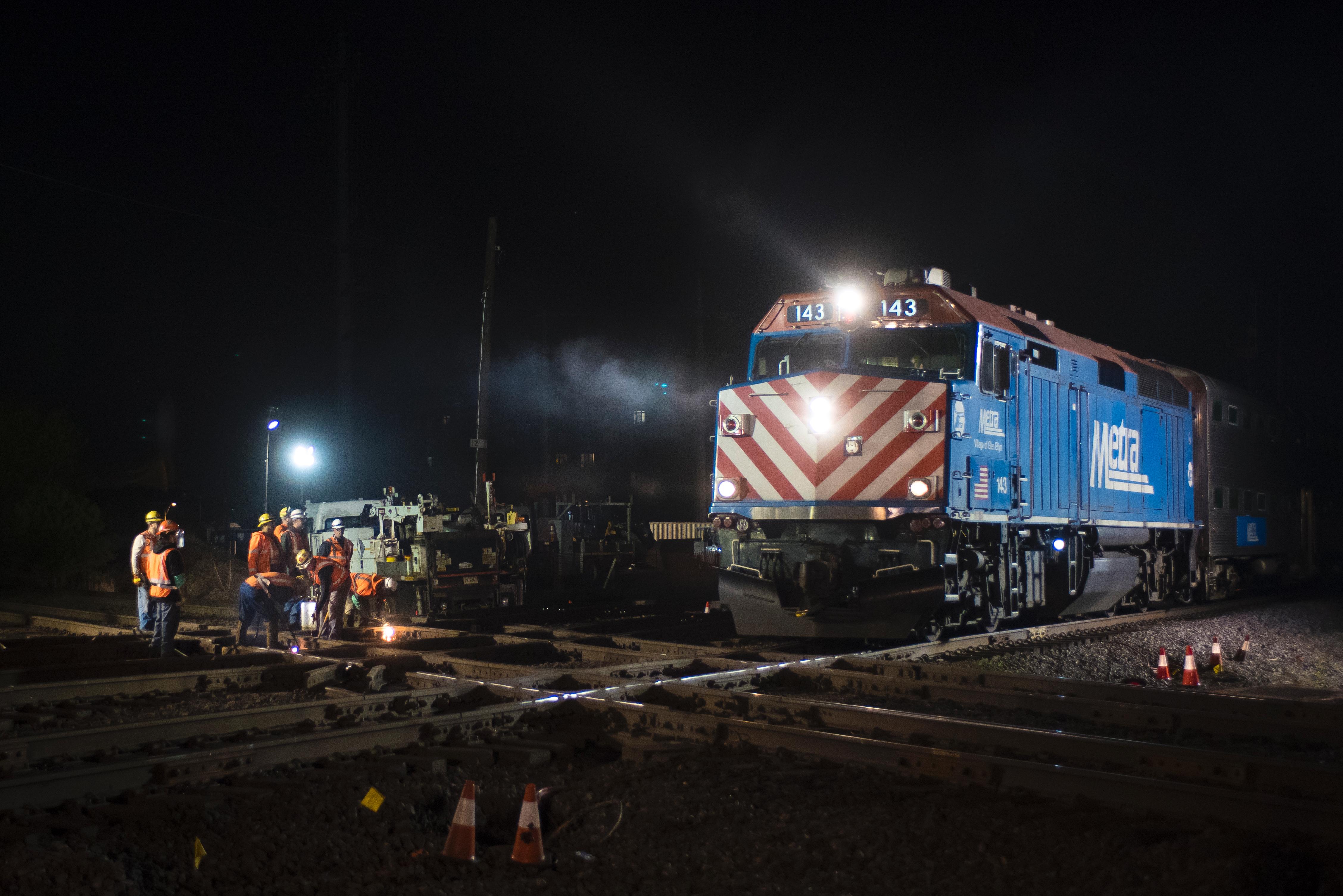 A Metra train passes on the Harvard Subdivision as the Union Pacific team begins cutting the old diamond with a torch.

Power lines and the weight of the diamond were unique challenges. "Normally we would use a crane to lift something that heavy, but with the amount of power lines going over this location, we had to use track hoes that weren't as tall," Bailey said. "We used end-loaders to lift the weight to set the diamond in place."

Mud can wear out railroad ties, and create undesirable surface conditions, which is felt by commuter passengers.

The drainage pipes also prevent mud in the diamonds. "We attached blow-out pipes on the drainage pipes, so that we can hook our vacuum truck up to them if they ever get clogged," Bailey said. "All of this will help us keep everything clean well into the future." 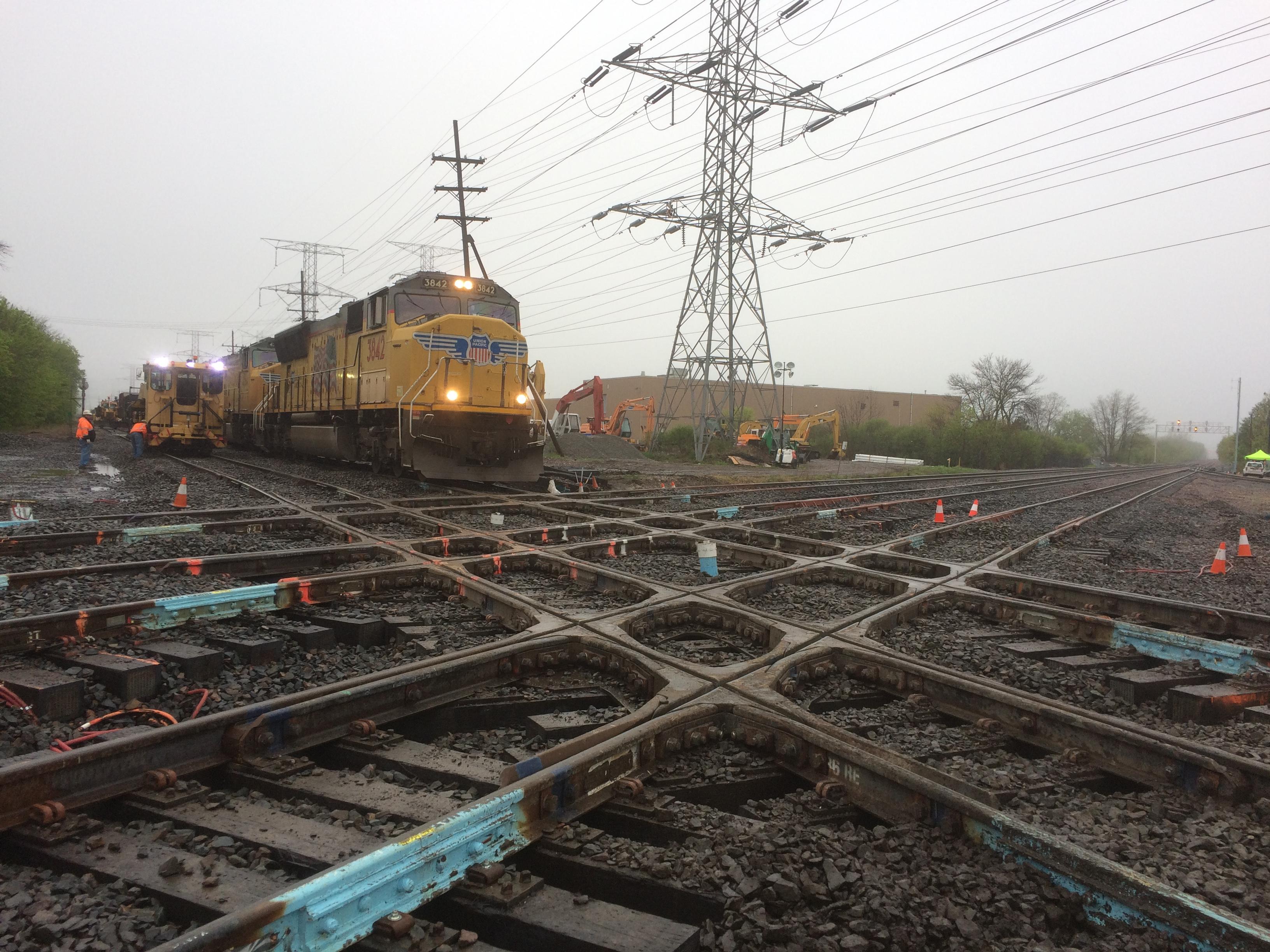 A Union Pacific train passes over the brand new diamond on the Milwaukee subdivision.

The new expansion joints allow movement of the rail and the joint of the diamond, so the entire diamond structure doesn't have to move. "Building the structure this way means the team won't be out there doing maintenance on the diamonds constantly," Bailey said.

The team also designed the diamond to eliminate about 76 bolts. "Track bolts are the weakest points," Bailey said. "That change also will reduce maintenance."

Foreman Rick Pedersen appreciates the reduced maintenance. When a track inspector discovers a problem with the Deval diamond, no matter the time of day, Pedersen has to stop what he's doing to solve the problem. Now that the project is completed, Pedersen and his co-workers are sure to get more nights, weekends and holidays back.

"This project improved my quality of life," Pedersen said.