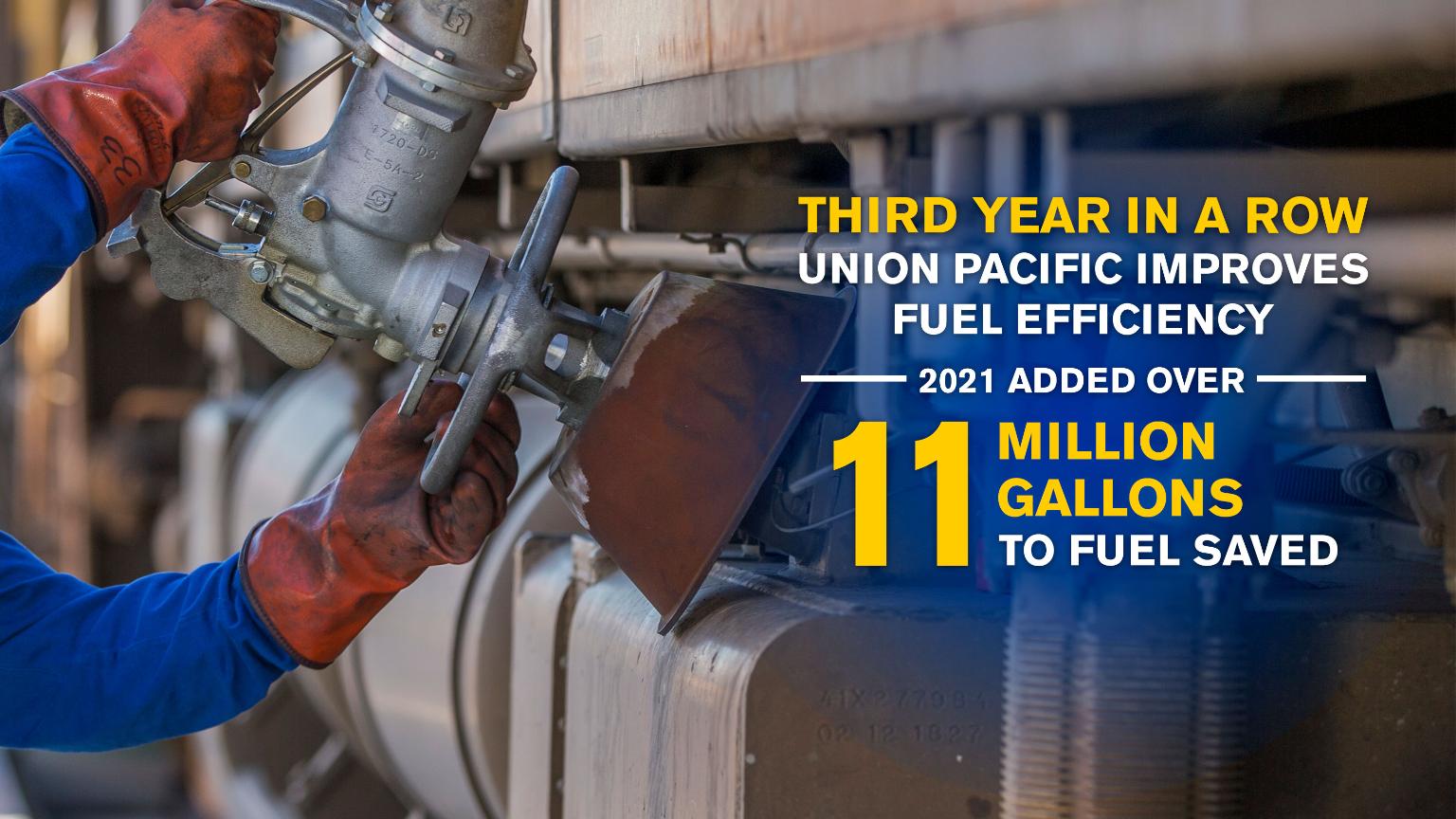 From right-sizing trains to recognizing fuel-efficient locomotive engineers, Union Pacific Railroad is utilizing technology and mobilizing its workforce to reduce fuel consumption and its carbon footprint.

The effort paid off again in 2021, as Union Pacific reduced its overall fuel consumption for the third year in a row and helped its customers eliminate an estimated 22.9 million metric tons of greenhouse gas (GHG) emissions by choosing rail over truck.

"In addition to reducing our environmental footprint by improving our fuel consumption, we are demonstrating to our customers and the communities in which we operate, the environmental advantages inherent in using rail versus truck," Parkerson added.

The record comes as Union Pacific started 2022, taking significant steps to advance its ESG goals, including purchasing the world's largest carrier-owned fleet of battery-electric locomotives for testing in yard operations, with first deliveries in late 2023. It also released its Climate Action Plan in late December that outlined its commitment to pursue net zero emissions by 2050.

Union Pacific's fuel-efficiency gains can be attributed to numerous operational and technological advancements, including identifying ways to reduce idling engines and ensuring that the optimal horsepower is used to haul freight.

Another key element is expanding and improving the use of Energy Management Systems (EMS) on nearly 2,900 locomotives in Union Pacific's fleet.

EMS is akin to cruise control on a vehicle. It allows the throttle and the dynamic brake system to be controlled automatically.

"EMS has details for all cars and locomotives within a train, track grade profile, and wayside signal status from Positive Train Control (PTC). It incorporates all this information – modeling the physics of the train – to run it as efficiently as possible," said Zack Wavra, director – Operating Technologies, Engineering.

Union Pacific began installing the original EMS prototype in 2011. Today, the system has been refined and improved, with more train crews using the system sooner and longer on individual train trips.

The goal is to finish installing the system in all of Union Pacific's high horsepower locomotive fleet by 2024.

Union Pacific is also working to improve and refine the system. Currently, EMS is only used after a train reaches a minimum speed. "We are working to develop and expand EMS, so that it can be used to automatically start and stop a train throughout a trip," said Wavra.

Union Pacific's fuel conservation team also utilizes horsepower optimization to increase fuel efficiency. For example, if during a portion of a trip, one of three locomotives is not needed, the crew can isolate locomotives to ensure the proper horsepower is being utilized

In addition to right-sizing trains, Union Pacific is also ensuring that locomotive power is strategically placed in a train to achieve more efficiencies. Based upon the length and load of a train, for example, it may be best if two locomotives are placed at the end, with one in the middle. This is a practice called distributed power.

"It not only makes it more fuel efficient to spread the power out on a train, it can make it safer," said Srini Nedunoori, principal engineer – Technology.

Union Pacific's fuel-efficiency efforts were enhanced by its adoption of precision scheduled railroading, which allowed it to improve asset utilization, by running longer trains.

Union Pacific is finding ways to recognize these efforts. For example, it recently started a Fuel Wrangler award program that honors the top locomotive engineers on each service unit who utilize EMS for every available mile.

It's a way to underscore the company's collective commitment to its ESG goals.

"I recently delivered a trophy to the Mechanical team out of Global IV in Chicago, Illinois, that found ways to prioritize the use of EMS on trains departing their yard. We were all excited, it was well deserved," said Jordan Shinn, senior manager – fuel conservation, Harriman Dispatching Center.

"There will be a day when we are solely utilizing alternative forms of energy to move freight, but until that day is here, it is our job to utilize the fuel saving technologies available to us and promote best practices through standard work focused on reducing fuel consumption," Shinn said.