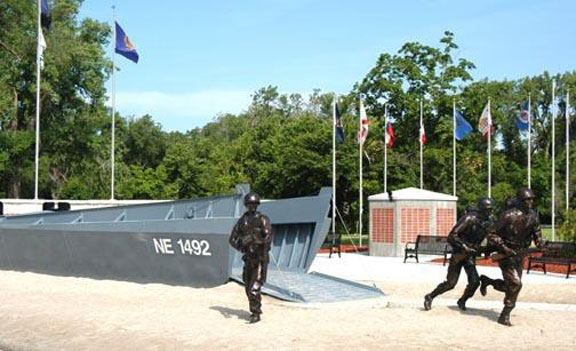 Andrew Jackson Higgins was a small-town Nebraska boy credited by Gen. Dwight Eisenhower after WW II with being "the man who won the war for us."

Andrew Jackson Higgins was a small-town Nebraska boy credited by Gen. Dwight Eisenhower after WW II with being "the man who won the war for us."

The invention of the LCVP (Landing Craft, Vehicle, Personnel) boats, with their ability to navigate waters only two- to three-feet deep, paved the way for the military to land on open beaches. Without these boats, Eisenhower said, "the whole strategy of the war would have been different."

Who would have guessed the idea for the boats came from Nebraska? Higgins was born in Columbus, Nebraska, and local lore suggests that it was the shallow rivers near town that sparked the idea for the invention. The family moved to Omaha before Higgins started high school, and one of the first Higgins Boats was built in the basement of the family's Omaha home. From the shores of the Missouri River to Omaha Beach in France!

A memorial was erected in Columbus, Nebraska, in 2001 to honor the inventor, his factory workers who designed and manufactured the equipment, and the soldiers and sailors who rode the Higgins Boats into battle. Now, the town seeks to expand that memorial across the pond — to the Utah Beach Museum in Sainte-Marie-du-Mont, France — and the Union Pacific Foundation is helping with a $10,000 donation.

The memorial in Pawnee Park, Columbus, features a life-sized replica of a Higgins Boat made of steel and set in sand, as if beached. The ramp is down to allow visitors to walk inside, and sand samples collected from numerous invasion beaches are mixed with the sand surrounding the boat. Running from the boat are sculptures depicting a soldier from each of the three wars in which Higgins Boats were used — WW II, the Korean War and the Vietnam War.

The memorial in France would be similar to Nebraska's. The three soldiers depicted all would be from WW II, and in addition to the boat there would be a sculpture of Higgins. The goal is to have everything completed and paid for in time for an unveiling in France on the 70th anniversary of Victory in Europe Day, May 8, 2015.

More information on the Utah Beach Higgins Memorial is available from the Columbus Chamber of Commerce at 402-564-2769.