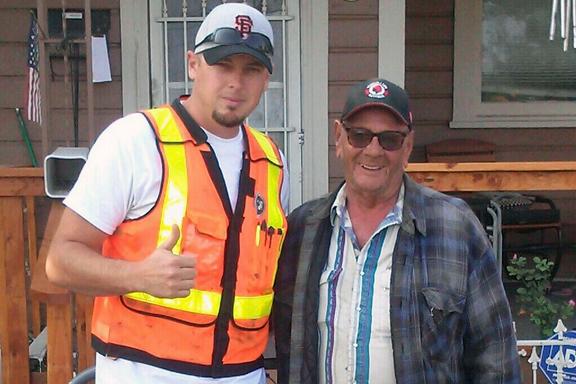 Josh Cyganik has waved to 75-year-old Leonard Bullock every morning for the past four years.

Bullock's house sits across the street from a portion of the Union Pacific main line in Pendleton, Oregon, where Cyganik meets his co-workers every day to begin his work maintaining tracks across UP's western region. "He sits on that front porch all day long," Cyganik said. "I never talked to him. Not until I heard what those two kids said."

It was a sunny day in July when Josh overheard two teenagers comment that the house should be burned down because it was in such bad shape. "I saw the look on Leonard's face. I could tell the comment bothered him," Cyganik said. "I don't think any elderly person should have to endure what I heard from those two kids' mouths. I kind of stewed about it for a couple days before I decided to do something." 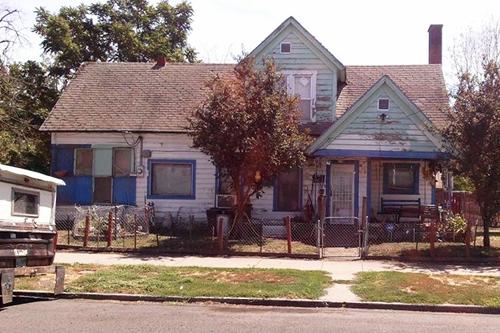 Leonard Bullock’s home before it was painted.

Determined to right the situation, Cyganik asked a few fellow railroaders to help out. He also asked his friend, Brian Christensen, manager of Tum-a-Lum Lumber, if he could donate some paint. "Brian was more than happy to donate supplies. After we had it all figured out, I went and asked Leonard if it would be all right if we painted his house," Cyganik said. "He was ecstatic."

Worried he wouldn't have enough helping hands with only a week's notice, Cyganik posted his story on Facebook with a plea to friends and family to support his effort. "My Facebook is private," Cyganik said, "but the post blew up like wildfire." The post was shared more than 6,000 times. 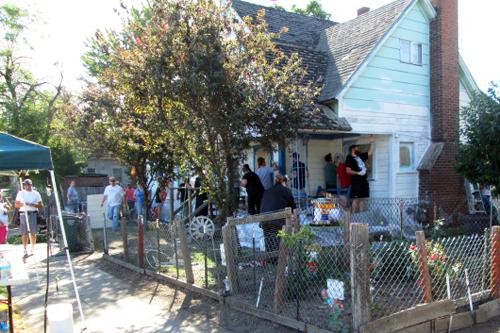 When Cyganik arrived at 8 a.m. on Saturday, July 18, about 20 volunteers already had shown up. Throughout the day strangers kept arriving to help, and by the end of the day more than 100 people had stopped by to lend a hand, including several Union Pacific employees.

"It was just a good vibe! Everybody was happy and excited," Cyganik said. "We received a lot of additional donations from people who didn't come but wanted to help. People were dropping off food and drinks all day long. Starbucks even donated six gallons of water and iced tea."

A Matter of Respect

The formerly white, blue and turquoise house now is a uniform warm beige, and thanks to more help from Tum-a-Lum Lumber, construction of a new porch is underway. Additional volunteers have purchased new outdoor furniture, and Cyganik and crew are looking for a roofer willing to donate time to complete the project. 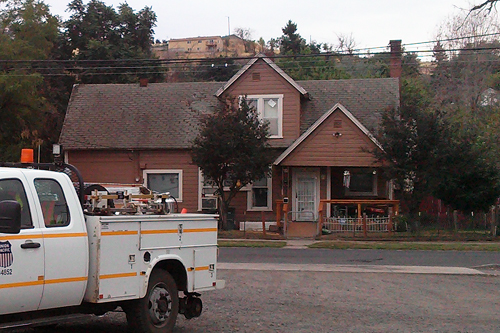 The Bullocks' home now has a fresh coat of primer and paint.

"Yeah, it was a random act of kindness, but to me it's more about respect," Cyganik said. "I was raised to respect the people who came before you, to help others out who don't have much. Leonard can now sit on his front porch for the rest of his years while feeling good about his home."

Cyganik maintains that what he did was not a big deal. "According to the media, I'm a hero. I'm not a hero; I just heard something that bothered me," Cyganik said. "Anyone would have done the same thing. Everyone has it in their heart to do things like this."

Throughout this process, Cyganik learned quite a bit about Leonard Bullock. Bullock is a retired forklift driver. He met his wife, Dorothy, at a church in Walla Walla, Washington. They married in 2000. Bullock retired in 1995, but even with his monthly stipend he and Dorothy didn't have the funds to fix up their house. "They're great people," Cyganik said. "You never know about someone unless you get to know their struggles. It means everything to me that so many people from across the country showed up to help and get to know Leonard and Dorothy."

After all the paint brushes were cleaned, the supplies stored away, and the volunteers had gone home, Cyganik was still getting texts at 10 p.m. "My buddy told me that Leonard and Dorothy were still sitting on their porch in the dark, just grinning from ear to ear."