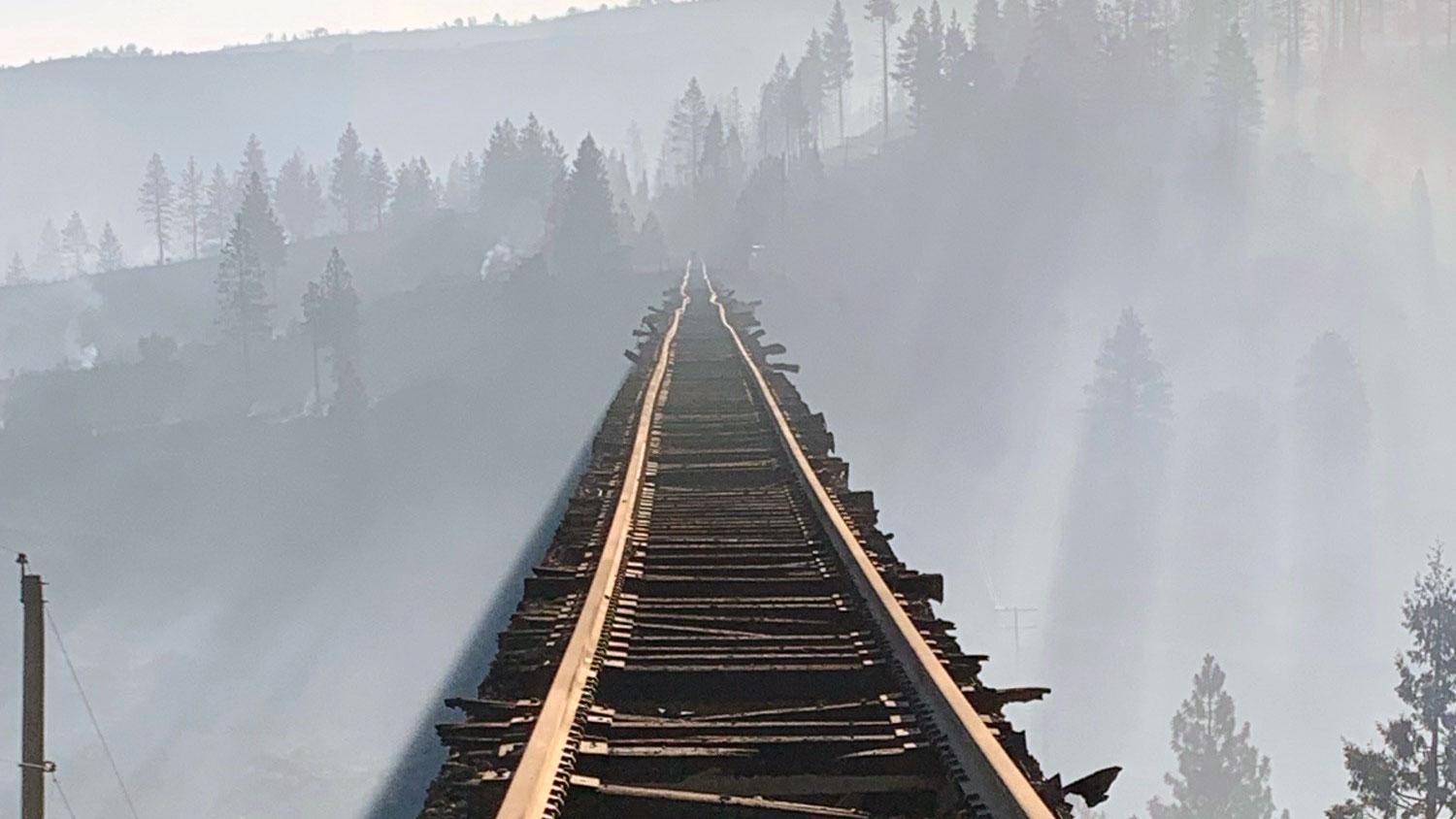 The first time a Union Pacific fire-fighting crew tried to reach the Dry Canyon Bridge in Northern California, they had to turn back. The risk of being trapped by the Lava Fire sweeping across the Shasta-Trinity National Forest was too high.

With water tank cars from Union Pacific’s Fire Car Fleet, the crew reached the bridge in the wee hours of the morning on June 29 – the day after 50 mph winds reignited the fire that has since consumed more than 25,000 acres and prompted an evacuation order for more than 8,000 people.

“We could see the bridge was on fire – smoke was all around it and there were small spot fires all over. At that point, we couldn’t get close enough with the water tanks because the track was compromised,” said Jamie Hill, director-Bridge Maintenance, Engineering, in Roseville, California. 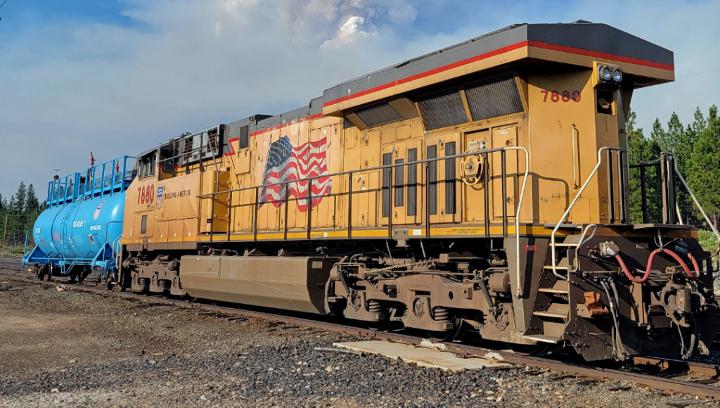 In the end, however, the employees who manned Union Pacific’s water tank cars, which are outfitted with nozzles that can spray upwards of 75 feet, managed to save an estimated 20 miles of railroad infrastructure.

With the fire under control, Union Pacific has turned its attention to repairing the bridge and the nine miles of track damaged in the blaze.

Three large cranes weighing 200 to 600 tons are now on site near the steel-girded bridge that stands 150 feet tall and spans 1,200 feet across a scenic valley. Due to the fire, workers had to build a road into the site and construct pads for the cranes.

Current estimates have the bridge reopening by September 1.

“The women and men who tirelessly battled to control the fire ahead of it reaching our right of way are to be commended for their unwavering commitment to the safety of their fellow railroaders, our infrastructure and the surrounding communities,” said Eric Gehringer, executive vice president-Operations.

“As the operation has transitioned to reconstruction, I maintain the highest confidence that our world-class Engineering team with the support of many other departments will safely and expeditiously return our line to service.”

At its peak, Union Pacific had about 30 people a day manning five to six water tank trains, working along a 90-mile stretch of track. About 30 miles of the 90-mile track span was actively endangered by three different fires that had broken out in the National Forest.

The crew doused spot fires and kept Union Pacific’s right of way, structures and tracks soaked with water. “We were fighting fires like no tomorrow. This has been the most active stretch of miles I’ve seen at one time,” said Hill, who was grateful to his team and credited them with doing the hard lift. 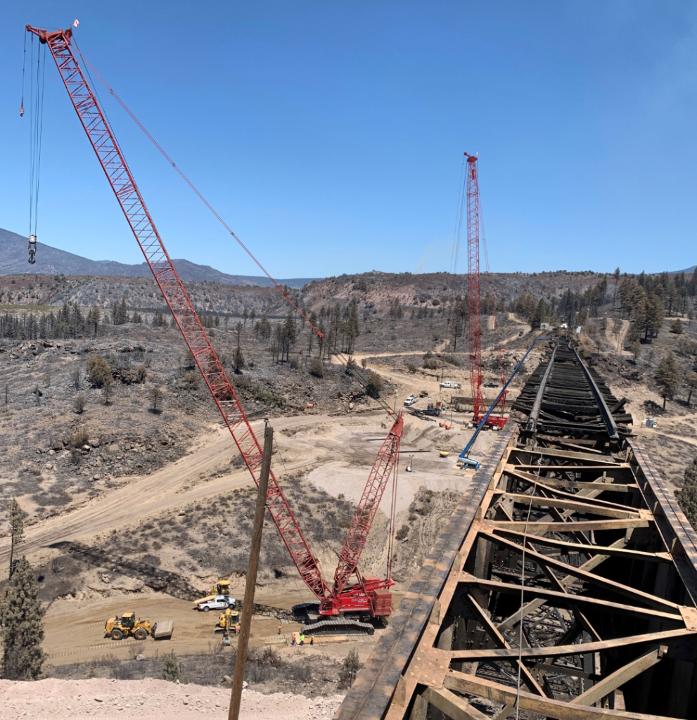 Repair work has begun on the Dry Canyon Bridge damaged by the Lava Fire.

Union Pacific even assisted federal, state and local first responders on the ground, hauling water into remote sections of the National Forest to fill trucks outfitted with water tanks on the ground, saving firefighters valuable time.

“We work hand in hand with the U.S. Forest Service and others, coordinating our responses and supplementing where we could their fire-fighting efforts,” said Anthony Bernhard, director-Track Maintenance, Engineering.

Union Pacific has a fleet of about 50 water tank cars known as the Fire Car Fleet. These former tank cars were converted into water pump cars and can hold 7,000 to 23,000 gallons of water.

They are strategically placed along Union Pacific’s railroad lines in California, Oregon, Washington, and Colorado, and they stand ready to respond, day or night. 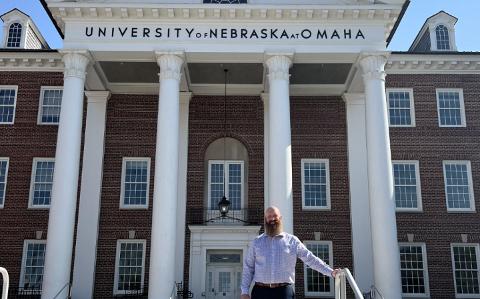 Welder Thomas Frey’s first three years with Union Pacific have been fast paced, as his work and home lives kept him moving. While Frey’s Houston Engineering gang travels the system, his three college student children and a fiancé keep him on his toes. But always up for a challenge, Frey decided to add one more thing to his plate – turning his associates into a bachelor’s degree. 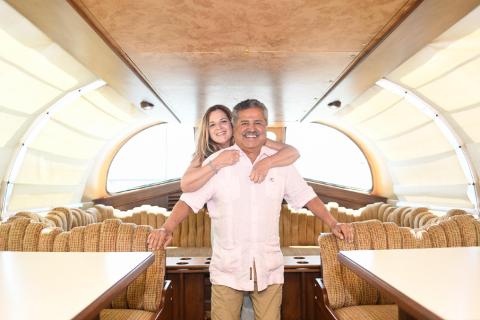 'Greatest Train Set Ever': Daniel Finds Satisfaction in Moving Trains from Point A to Point B

Pancho Daniel said he wouldn’t trade his railroad career experience for the world, including a five-year stretch in the late 1970s and early 80s when he was a full-time presenter for the newly formed Operation Lifesaver, talking with schoolchildren throughout Nevada and Utah about railroad safety. 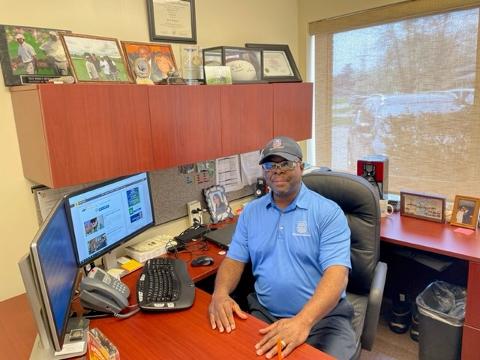 Craig Crisp’s perspective has led him down a career path uniquely his own, recently earning him a promotion. This year, the 28-year railroader started a new position as a manager-Track Construction Projects. In this role, Crisp will evaluate and implement railroad capital project designs.

Union Pacific’s tangible commitment to communities started nearly 70 years ago, when the Union Pacific Foundation was created to support local charitable, educational and scientific activities. Now part of the Community Ties Giving Program, the Foundation has awarded grants every year since its launch in 1955. Our annual, open request for proposals process is open through May 31.