Long Rail Is a Game Changer 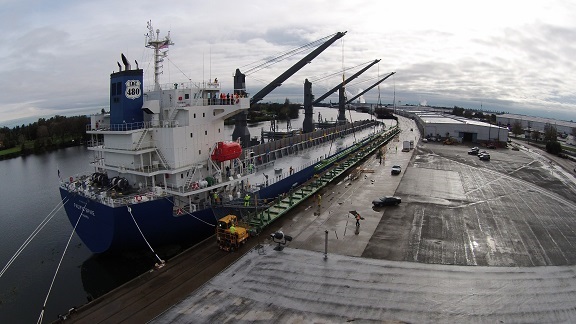 Cranes load 480-foot sections of high-strength, head-hardened continuous cast rail from a ship at the Port of Stockton to shuttle cars.

A dream more than a decade in the making is now reality. Union Pacific is the rail industry's first to import long rail from Japan to its custom facility at the Port of Stockton, California, setting a new standard for rail reliability.

A dream more than a decade in the making is now reality. Union Pacific is the rail industry's first to import long rail from Japan to its custom facility at the Port of Stockton, California, setting a new standard for rail reliability.

Full appreciation of the milestone requires a historical perspective. America’s first railroads were constructed by bolting together 16-foot-long sections of steel rail. The bolted areas were structurally the weakest, having the potential to break and cause a derailment. By the 1940s, steel companies began manufacturing longer sections, fused together in welding plants to create quarter-mile-length segments. A great advancement over bolted rail, the welds strengthened the track structure.

By the 1980s, head-hardened rail was developed, cooling steel at a rate that provided additional strength. The new standard section became 80 feet, requiring 17 welds to create a quarter-mile length. Longer rail sections continued to be developed, but weren't as strong.

During this time, Union Pacific, Nippon Steel of Japan and Sumitomo Metal Corp. began discussing a revolutionary idea – manufacturing and shipping high-strength, head-hardened continuous-cast rail in 480-foot-long sections. With access to long rail, only two welds are needed to create quarter-mile lengths, representing an 88 percent reduction in the number of welds. 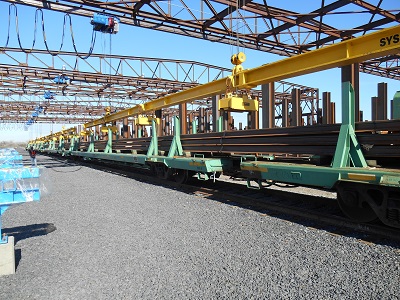 Union Pacific evaluated many options for the 480-foot rail sections, including U.S. manufacturers. The company selected the only supplier who met all the necessary requirements for length, strength and weight, which are essential in providing safe, reliable rail.

Implementation required innovation in every aspect of the process. Sumitomo designed "Pacific Spike," the first ship in the world serving as a long rail shuttle for Union Pacific. It’s outfitted with three cranes synchronized to simultaneously unload five rails weighing 10 tons. The rail is stacked three bundles high onto specially designed shuttle cars to be moved from the dock to storage.

Construction on the Port of Stockton's roughly 25 acres just finished. Typically, new facilities are built around old rail yards, but this one was designed nearly from scratch. The port has three tracks and two bridges, plus custom storage and welding facilities designed to accommodate the additional rail length.

The $18 million welding facility, equipped with a special overhead crane to lift the rail, began operations this week. Despite the unique nature of the process, standard weld techniques are used to create quarter-mile lengths, which are loaded onto a standard rail train and shipped out for use. UP's Engineering Department is still determining where the first long rails will be placed.

Pacific Spike has made two deliveries, with a third set for May. At that time, a dedication ceremony will be held.

What once was a dream, now is reality. Union Pacific is the rail industry’s first to import long rail from Japan to its custom facility at the Port of Stockton, California, setting a new standard for rail reliability. The sections of rail are delivered aboard the Pacific Spike, the first ship designed to carry the 480-foot-long rail sections.