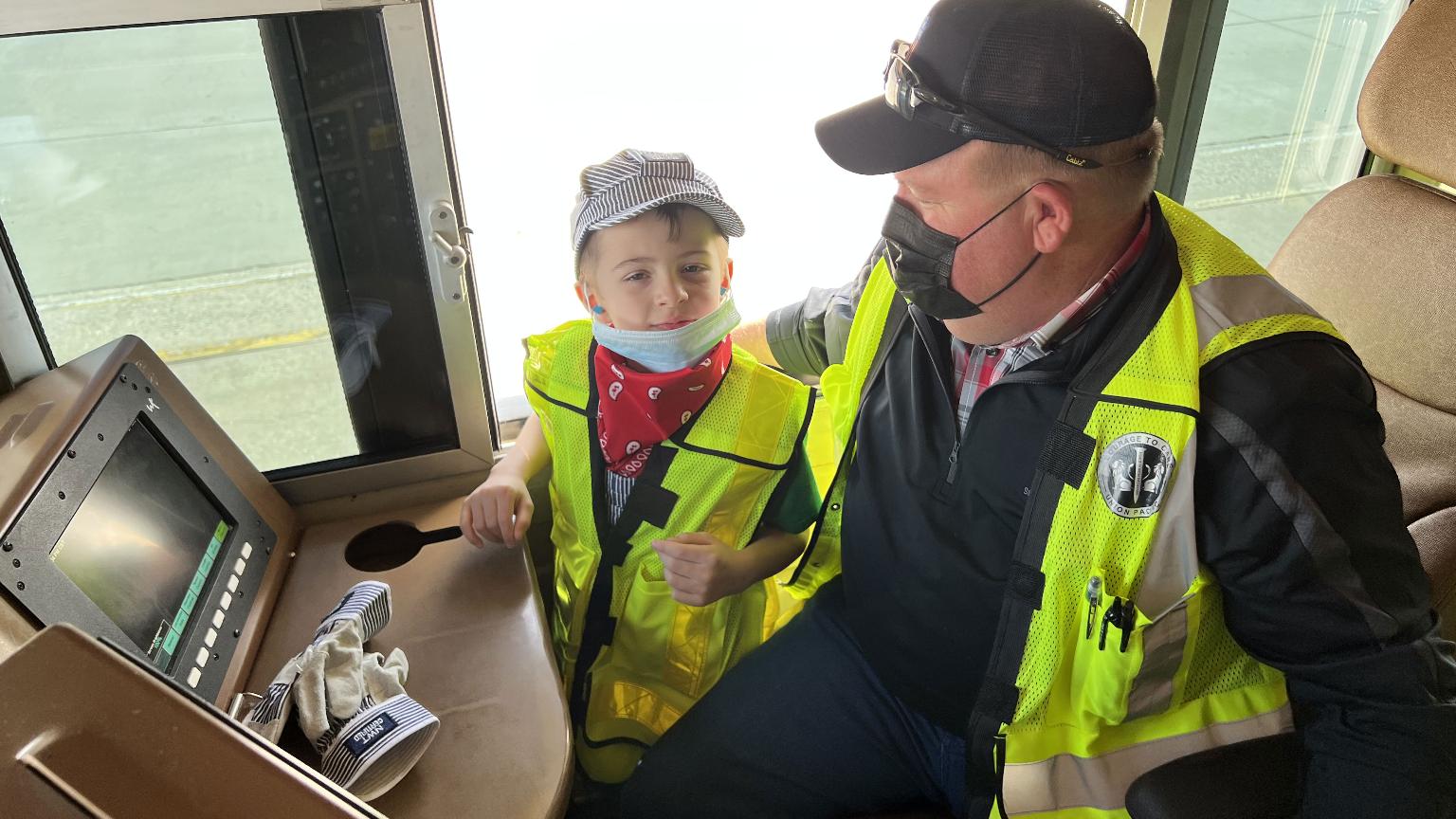 When Charles Gustafson first heard about a little boy’s Make-A-Wish request to “drive” a locomotive, the senior manager for Union Pacific Railroad in Houston, Texas, knew it was a tough ask.

But Gustafson and his teammates at Englewood Yard in Houston, including Tameeka McCray, manager of field operations, also knew it couldn’t be a flat “no.”

“Most kids love trains, but this request was special. It wasn’t a project for us. It was about making Connor’s wish come true,” said Gustafson, senior manager, Houston Service Unit.

On Feb. 17, after months of meetings and logistical planning that involved more than two dozen people in numerous departments, 6-year-old Connor Foland’s wish came true, as the surprised little boy climbed aboard a locomotive, flashing a huge smile as a seasoned Union Pacific crew showed him the rails.

“It was an honor for us to give Connor and his family this special day. I also want to say, that I couldn’t be prouder of our Houston team. I know the hard work and dedication that it took to make today happen,” said Andrey Drozdov, general manager, Transportation, Houston Service Unit.

All the hard work was worth it, said McCray.

“When I saw Connor and his family walking up to the tent, and I saw the excitement in Connor’s eyes, I got a little teary-eyed. It just made my day to know that all our hard work paid off and we made a kid very happy,” said McCray.

Connor Foland was diagnosed with adrenoleukodystrophy – a genetic disease that damages the membrane that insulates nerve cells in your brain, about two years ago, said his mother Brianne Foland. 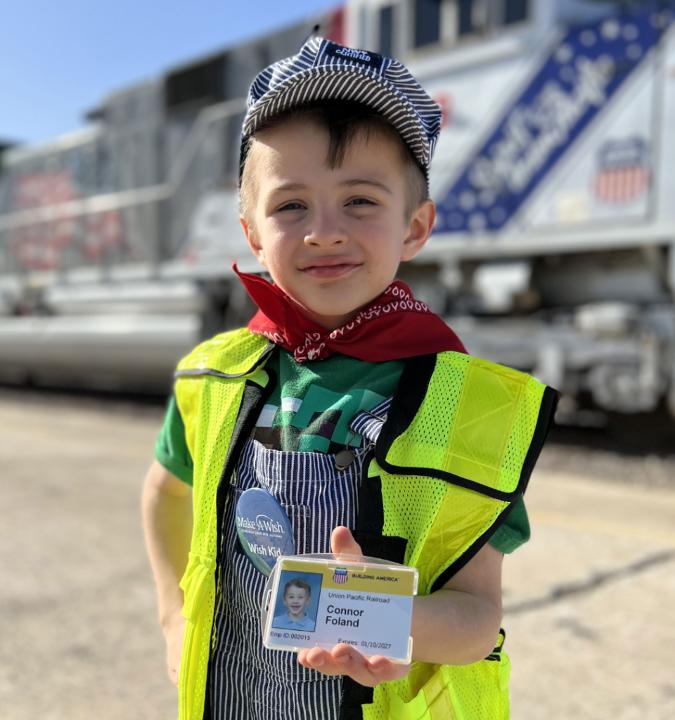 The first grader and his older brother, Travis, 8, have the same critical disease and they are both doing great, after spending their fair share of time in the hospital, said Foland.

The two were granted wishes by the Make-A-Wish Texas Gulf Coast and Louisiana chapter. Travis will get to learn about dinosaurs Feb. 19 at the Houston Museum of Natural Science.

“When they asked Connor, ‘What do you want to do? Do you want Disney World? He said, he wants to drive a train.’ He never changed his mind. And, he wanted the real thing,” said Brianne.

Connor has been fascinated with trains since he was 2 and it’s a fascination that has never waned. “Every time a train comes by, he’s ecstatic to watch it. He’s just fascinated by them, learning everything he can,” said Brianne.

Connor arrived at the Houston Englewood Yard to a day of festivities – a complete surprise. He didn’t know until he was handed a Union Pacific work badge – complete with his picture and a work number – that he would be “driving” a train.

The Houston crew also gave Connor a replica of a locomotive, along with the proper PPE.

“The day couldn’t have gone better. We made it as realistic for him as possible,” said Gustafson.

“All the planning, all the work, was worth it when we saw Connor’s smile in the cab. He got to feel the engine. Smell the engine and hear all the sounds, sitting in the engineer’s seat.“ 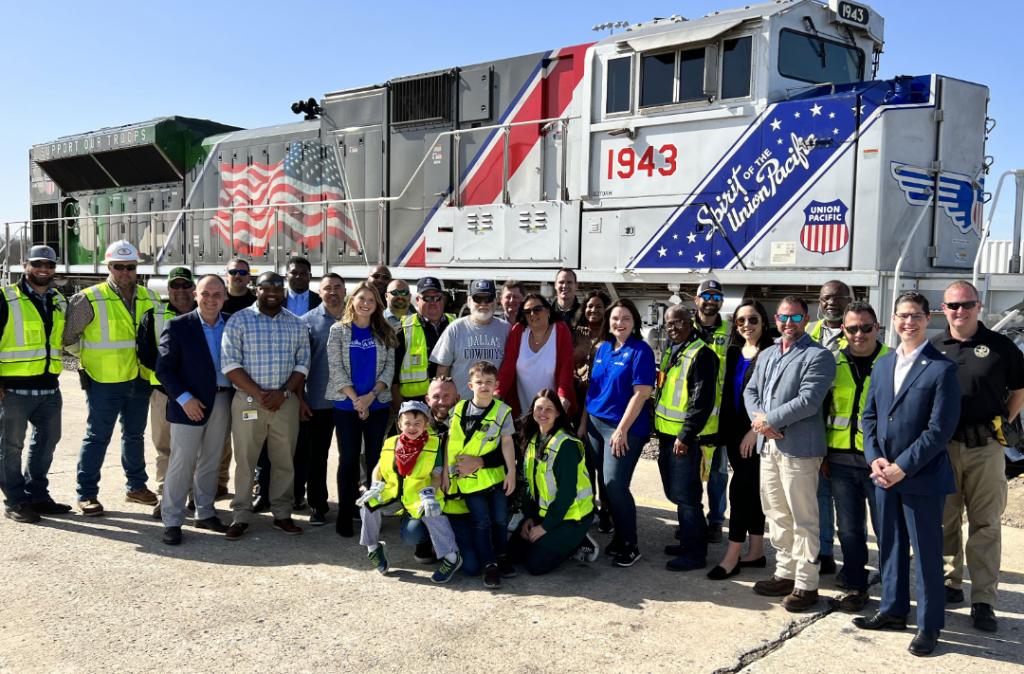 Union Pacific’s Houston Service Unit joined forces with the Make-A-Wish chapter in Houston to give Connor Foland and his family – Justine and Brianne Foland, along with his brother, Travis, 8 – a day they will remember.