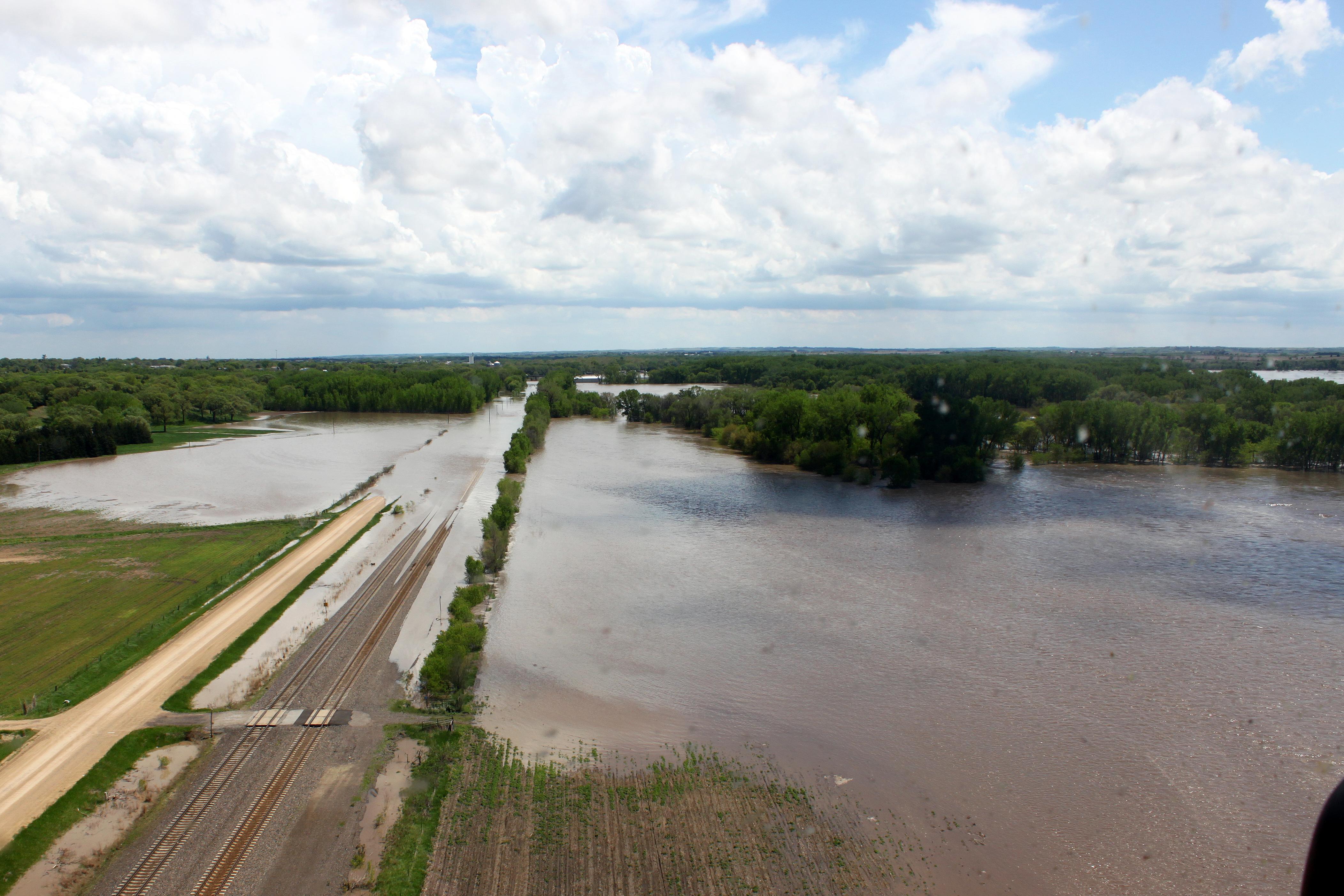 Heavy spring rains caused the Little Blue River in Central Nebraska to flood on May 6, 2015. The flood washed out several stretches of track on Union Pacific's Marysville Subdivision, which runs more than 100 miles between Gibbon and Fairbury, Nebraska.

Few natural disasters are more devastating than a flood.

Case in point: May 6, 2015, Fairbury, Nebraska. The tiny railroad town of fewer than 4,000 sits quietly on the banks of the Little Blue River. Heavy spring rains are nothing new, but no one expected the monsoon that settled into the southeastern corner of the state for several days. The storm dumped more than 10 inches of rain in a matter of hours.

Flood stage for the Little Blue is 17 feet. By the time it crested, the river stood at more than 25 feet, devastating the entire southern half of the little community. Businesses were flooded; homes were under water, half the town was evacuated and one elderly woman lost her life.

Picking Up the Pieces

"Our No. 1 priority is safety," said Union Pacific's Brent Starr, a superintendent at the Harriman Dispatching Center in Omaha. The dispatching center is responsible for controlling all of the train traffic on Union Pacific’s system. “When something like this occurs, the dispatching center stops all train movement passing through the area for track inspections. It’s the only way to keep everyone safe."

When a spring monsoon destroyed miles of Union Pacific track near Fairbury, Nebraska, crews sprung into action, restoring the mainline back into service in just 46 hours.

The Harriman Dispatching Center team and Ken Bruening, chief maintenance of way engineer for the Northern Region, stayed in contact with forces on the ground to hear about potential wash outs along Union Pacific’s Marsyville Subdivision, which runs more than 100 miles between Gibbon and Fairbury, Nebraska. Early reports from a manager of track maintenance indicated many miles of track had been destroyed. 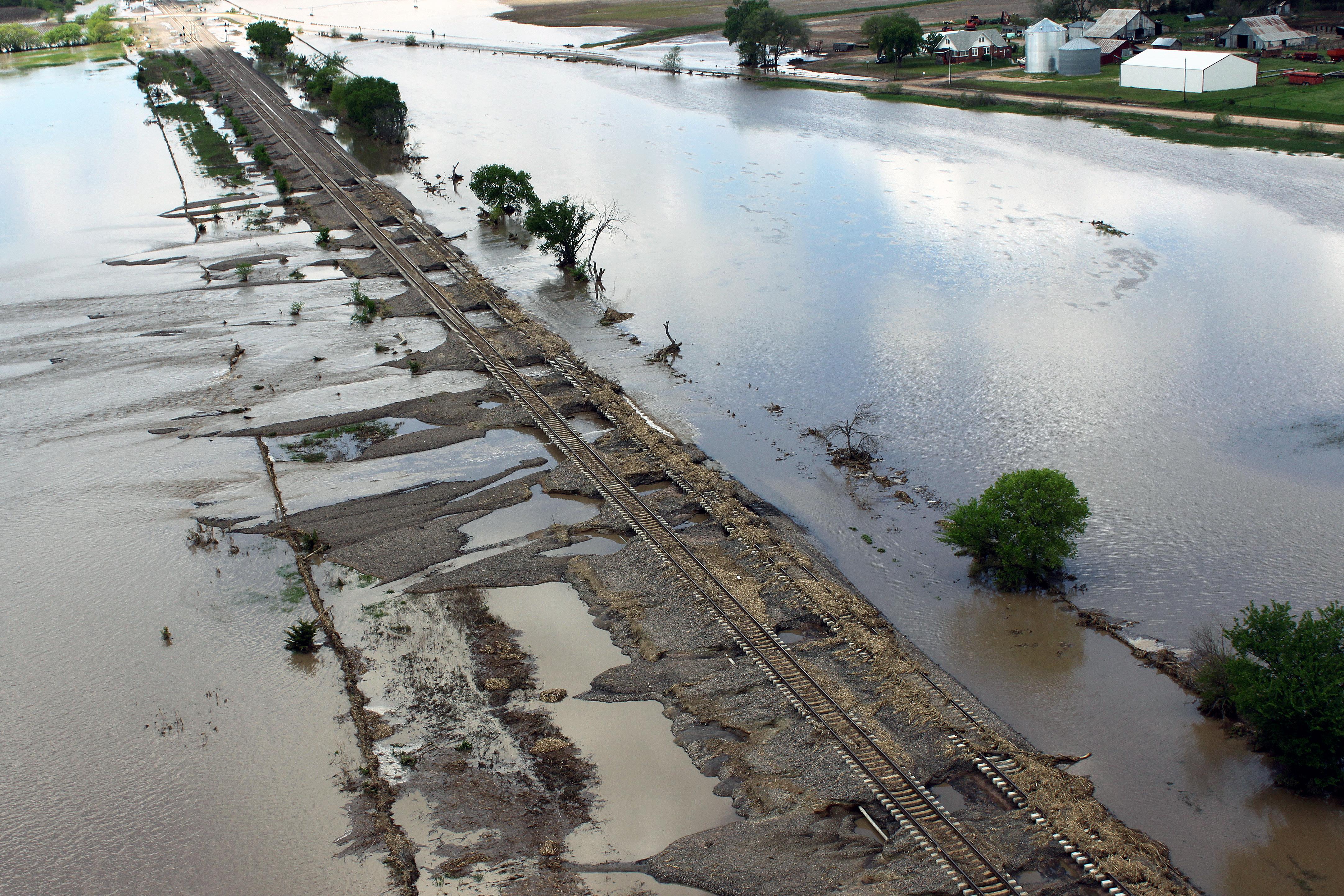 The damaged track required UP employees at the Harriman Dispatching Center in Omaha, Nebraska, to reroute trains to avoid a potential traffic jam.

Starr said trains were immediately rerouted to avoid a potential traffic jam. "We know which specific routes to take when we have outages," he said. "If we can’t find a good route of our own, we will reach out to our railroad partners and try to schedule detours on their tracks.

Meanwhile, Starr and his team determined if there was any risk to the public. "We also needed to know if we had anything in the flood zone that might put a crew at risk, and when would it be safe for engineering to get out there," he said. "Once we were sure everyone was safe, we looked at what we could do to help the company get the track back as soon as possible."

Rail outages are costly. Every minute a piece of the double mainline track is out of service, it significantly impacts customer operations. Many customers have a manufacturing process that depends on timely delivery of materials. A track outage impacts the customer’s ability to deliver to their own customers. Bruening and his engineering team were racing against time.

Had it been a smaller incident, Bruening might have had enough supplies stockpiled and equipment nearby to repair the damage. "In a situation of this magnitude, everyone from every corner of the company has to pull together to figure out how we can restore service as quickly and safely as possible," he said. 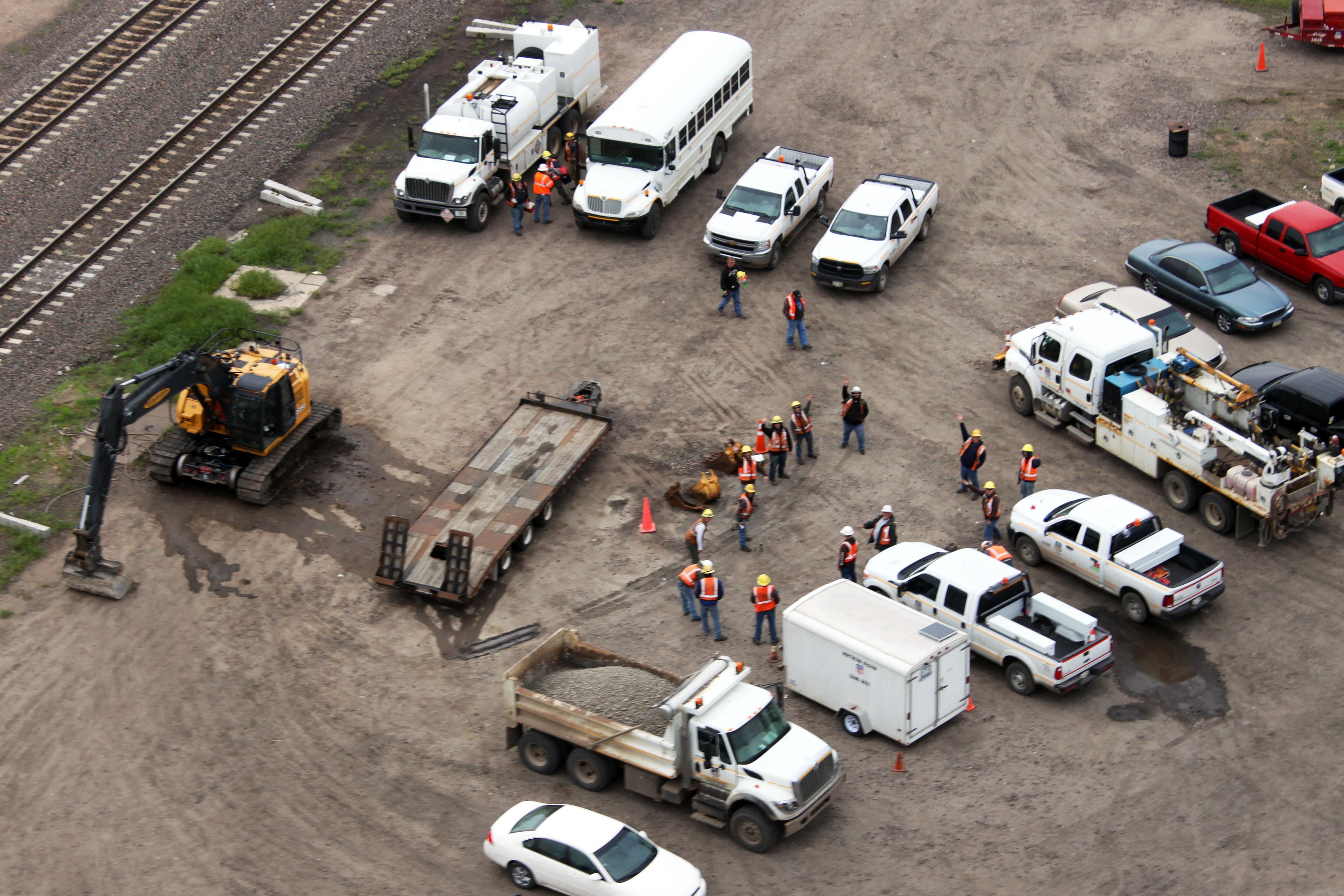 More than 85 Union Pacific employees from several departments pulled together to restore service on the damaged mainline.

The UP employees who control train operations and those who make sure the track is safe to operate on began working rotating 12-hour shifts. The process calls for reaching out to area construction gangs for help. “We’ll also talk to bridge maintenance and other departments to gather extra hands," Bruening said. "We’ll even sometimes fly in people from different regions of the railroad. For the flood near Fairbury, we had managers from the southern half of the United States come in and help manage the situation."

Some roads were so devastated by the flood that resources had to be flown in by helicopter.

When a flood like the one in Fairbury occurs, coordination is key to ensure every section of the team is working in sync. Engineering and train operations managers coordinate with locomotive and crew management groups to ensure necessary resources are available to get the railroad moving again.

"The Supply Chain group will often come in to help us keep track of how we’re using outside resources," Bruening said, "and Corporate Relations communicates with the outside world to make sure we accurately explain what happened."

When the Storm Clears 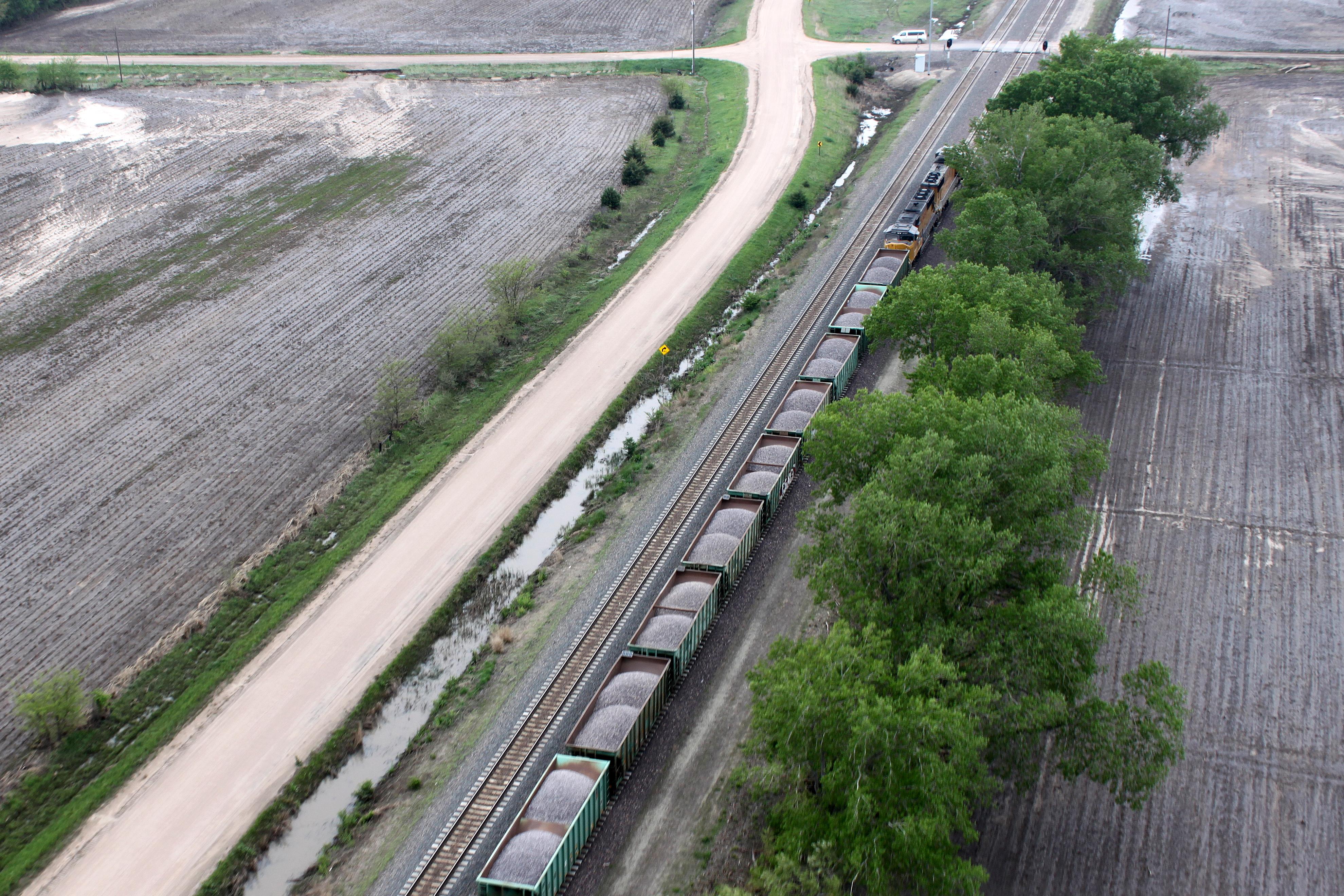 With more than 85 Union Pacific employees from several different departments working together, the piece of damaged mainline near Fairbury was restored in just 46 hours. To repair the massive washout, Bruening’s team required more than 22,000 tons of ballast -- the gravel used to form the track bed -- and 27,000 tons of rip rap, large stones used to prevent future flood damage. To put that amount of materials into perspective, one Union Pacific locomotive weighs about 33 tons.

After every disaster, Bruening looks for ways to prevent future damage to the mainline.

“In some cases, we can raise the track,” he said. “One of the big contributors to this situation was a Fairbury flood wall that stretches underneath our track. Unfortunately, there is a nearby bridge that prevents us from raising the track. Next time Fairbury considers rebuilding the highway, we’ll try to work with them to make sure the wash out doesn’t happen again.”

After the repairs made by Bruening and his team, the same area saw an additional 11 inches of rain in June. The tracks continue to hold strong. 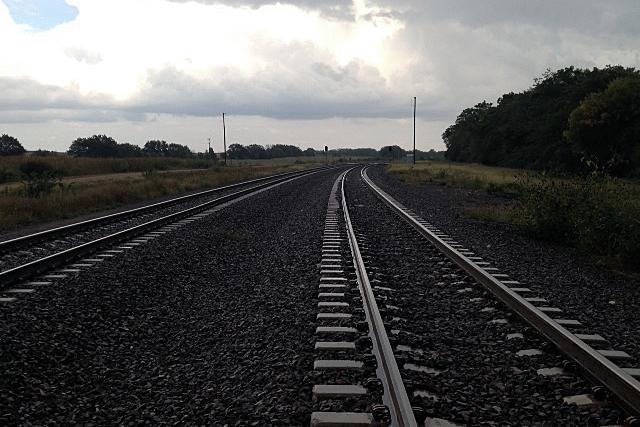 A portion of the repaired, washed out track near Fairbury, Nebraska.