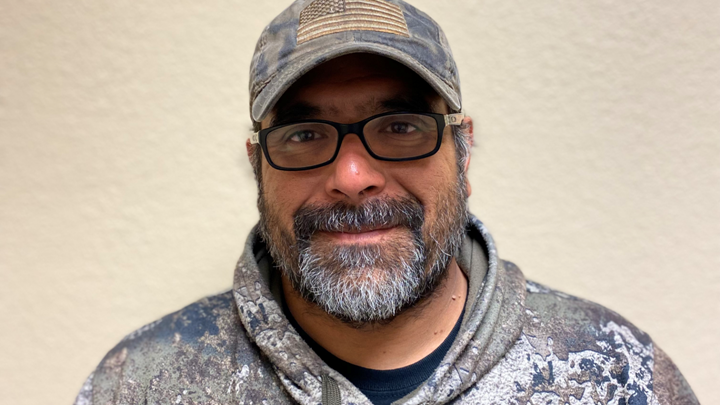 Miguel Ochoa, track foreman-Track Maintenance North, Engineering, rescued a family of three when he saw their vehicle crash on the interstate.

When an emergency strikes, it’s the Courage to Care that reminds Union Pacific employees to pause and do the right thing.

If no one else stops to help, you’ll be fortunate to have people like Track Foreman Miguel Ochoa on your side.

On Oct. 21, Ochoa was driving his truck on the interstate to a job site in Oakland, California, when a sedan in front of him began fishtailing in the rain.

Ochoa saw the vehicle lose control and spin, hitting a large truck and then the concrete barrier on the shoulder.

Slamming his brakes, Ochoa avoided the accident himself.

The large truck pulled over about a mile down the interstate.

Ochoa, next to the sedan, looked over and noticed the driver slumped over.

“I didn’t see him moving,” Ochoa said. “I just thought, ‘I’ve got to get to him.’ I got out of my truck and went over to his car. I could see he needed all kinds of help. I couldn’t feel his pulse.”

Ochoa began chest compressions on the man, and noticed a woman and an infant in the backseat who also weren’t responsive.

“I kept giving the man chest compressions, but that’s when I told him if you don’t come to in two seconds, I’m going to the baby,” he said.

Ochoa said the man suddenly began making a sound, so Ochoa moved around the vehicle to the baby. She didn’t have a pulse either.

“I was really scared for the baby, who was bleeding,” Ochoa said. “After about four or five chest compressions, she started to cry, so I knew she was back, too. I later found out she was just three weeks old.”

Ochoa made it to the woman’s side of the vehicle. She also didn’t have a pulse.

“It took a while to get the mother to come to,” Ochoa said. “But then suddenly she was making a sound and coming back also.”

Ochoa called 911 to get help. However, in the heat of the moment, he couldn’t recall where he was on the interstate. Remaining on the phone, he tried flagging down drivers to stop and assist.

“Nobody stopped,” Ochoa said. “People would smile and wave, but they just kept going. It was just me helping these people.”

After a few minutes, Ochoa gathered his bearings. He told the 911 operator where they were located, who dispatched emergency responders.

Ochoa noticed the family trying to exit their car. He helped them move into his truck and turned on the heat so they could be safe and warm until paramedics arrived.

After reviving the injured family members, Ochoa helped move them to safety in his truck.

Ochoa said he’s glad he not only stopped to help, but that he knew what to do when he saw the family in distress thanks to the CPR training he has received while working at UP.

“Sometimes when we go through these trainings, we kid around,” he said. "Some people may not pay attention because they never think it will happen to them. I’m so glad now that I paid attention. Next time we have a class, I’m going to tell everyone this story so that it makes it more real. It opens my mind that this is so important.”

Philip Garber, senior manager-Track Maintenance North, Engineering, commended Ochoa: “Sgt. Fajardin and Officer Oliver from the California Highway Patrol informed me that he most likely saved the three individuals' lives by stopping, calling EMS and performing the actions he did. Ochoa is a great person and employee with a positive attitude and demeanor.”