Patriot Award Honors Employers of Those Who Serve 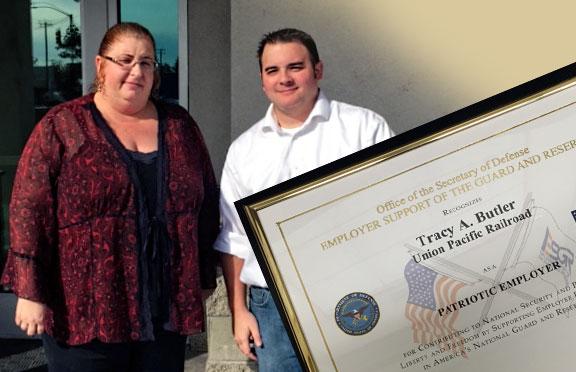 They call them citizen soldiers. The term goes back to when the National Guard was first formed as an essential element of the U.S. military, to protect families and towns from hostile attacks. Today, the National Guard plays an even broader role in protecting our country. But what helps make the Guard work is the ability for these citizen soldiers to live and work in our communities until service calls.

Citizen soldiers like National Guard Sgt. Mark Mateo, whose primary job is as a general clerk in UP's Los Angeles Commerce Yard. Since joining UP in 2014, Mateo has been required to complete regular training as part of his commitment to serve in the Guard -- including special activation due to the recent California wildfires.

When called to service, Sgt. Mateo was able to focus on his duties without having to worry about his job or work back at Commerce Yard. He knew UP's Tracy Butler, manager of intermodal terminal operations, and Doug Johnson, Tracy's supervisor, had his back. That's why Sgt. Mateo nominated them to receive the Patriot Award.

The Patriot Award honors supervisors for their superior support of Guard and Reserve employees. Nominations must come from a Guard or Reserve member or a family member. Nominated employers receive a certificate of recognition and a lapel pin.

Butler was surprised with the honor. “We were just doing the right thing,” she said. “Then someone shows up and gives us an award… I had no idea.”

“I’m honored,” Johnson said. “Like Tracy, I was pleasantly surprised. Sometimes you don’t realize how much you’re appreciated by your employees until something like this happens.”

Johnson's brother has been active duty in the Army for 13 years, so he’s witnessed the sacrifices that service to country required. “It’s a voluntary military commitment and it’s important. It’s something that gets my utmost respect,” he said, adding that the same respect applies to citizen soldiers like Sgt. Mateo. "We know when Mark's away from here, that he's also away from his family, too.”

Both managers say they like to hire people with a military background. “There are a lot of traits that are transferable between military training and some of the things we do on the railroad,” Johnson said, "such as the strict safety rules we adhere to and the high ethical standards that we hold.”

Butler also has family ties to the military. Her father is retired military, along with two uncles and both grandfathers. “The past three generations of my family fought for our country,” she said. “I’m proud of that. Anything to support them, and I know Union Pacific is fully behind that.”