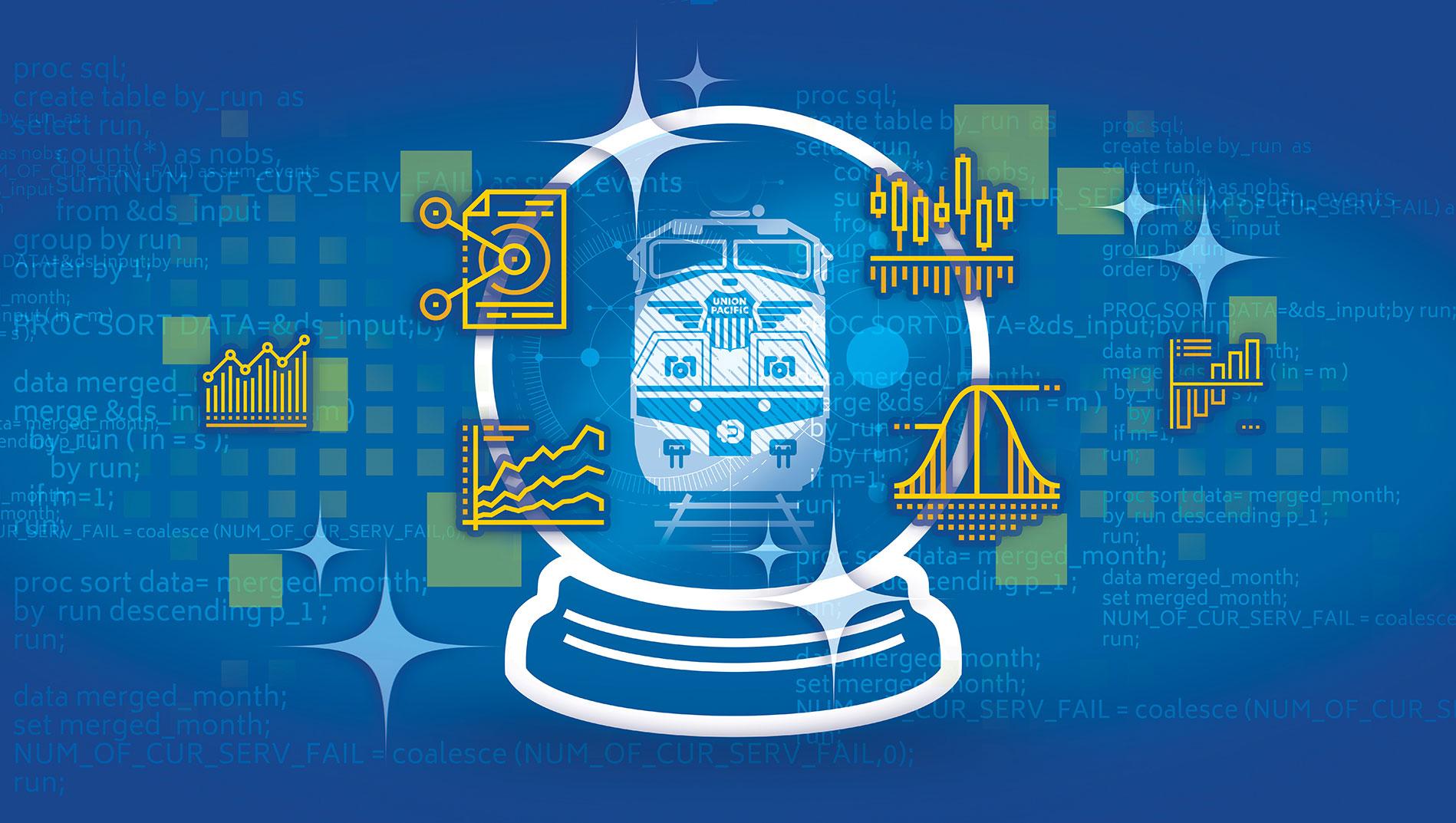 The goal: Take the data collected across more than 32,000 miles of track, plug it into a computer, and accurately predict which track section will break next. They call it predictive analytics, and it’s the science of harvesting vast amounts of data about the past and using it to predict the future.

Much like everything else on the railroad, the amount of data collected every day is enormous. “Big data” is an understatement.

Union Pacific collects data from past incidents, ongoing track maintenance, road bed conditions, track materials and physical wear. With all this data, Union Pacific’s decision analytics, engineering and safety teams have been working to create a predictive analytics model to generate a list of the most at-risk track sections, mile-by-mile.

Broken rails are the leading cause of train derailments in the U.S., according to the Federal Railroad Administration. Daniel Torres, Union Pacific director of rail management, works hard to upgrade Union Pacific’s infrastructure before defects occur.

“We already have a lot of important standard systems that guide us in the right direction,” Torres said. “But this model looks at rail in a different way. It tells me which elements are creating risk long before something goes wrong. It enables us to be more strategic in our infrastructure investment decisions.”

Created by a cross-functional team of engineering, information technology, operations and safety experts, the new model is the result of decades of investments in data collection technologies installed in track, trucks and on right-of-ways.

“We tested a variety of data points, things like air temperature, whether the rail ties are wood or concrete, and rail age,” Lahvinovich said. “We were looking to see what combination of information best predicted rail failure mathematically. Air temperature, for example, didn’t test well. It wasn’t a good predictor, so it is not included in the final version.”

"The model looks at thousands of variables that make a piece of track stand out long before a failure occurs."

As the model increased in accuracy, the team began testing it in the field.

“This model will never replace human senses or the vast knowledge base residing in the people we’ve trained for decades,” said Ed Adelman, Union Pacific general director of safety.

But Adelman says in most cases, there isn’t one single cause of track failures. It’s a bunch of little things that add up over time.

“The model looks at thousands of variables that make a piece of track stand out long before a failure occurs,” he said. “Humans can’t assemble this much data and objectively use it to predict future track failure as quickly as these tools can. The data load is just too much to process for every mile of track, so the model does it for them.”

So exactly how much safer does this predictive analytics model make the railroad? When fully developed, Adelman expects the model to preemptively identify up to one-third of track-related failures in the top 10 percent of Union Pacific’s riskiest track miles. He also emphasized that everything Union Pacific does to inspect track, and fortify its infrastructure, is critical.

“The model alone can’t replace the human element of knowing and maintaining our railroad,” Adelman said. “You can’t decouple this from all the other things we do to detect track defects, it’s all important. But you can ease employee workload by using these tools to assess risk.”

Torres is certain this model is a sign of epic safety advancements to come.

“We’ll continue to get more precise,” he said. “We’ll keep dissecting our network, and working hard to understand its behavior. We just started working on a predictive model for track bed, I’m sure there will be another after that, and eventually they’ll start to learn from each other. We’re living in a new world of information, and it will continue to expand.”