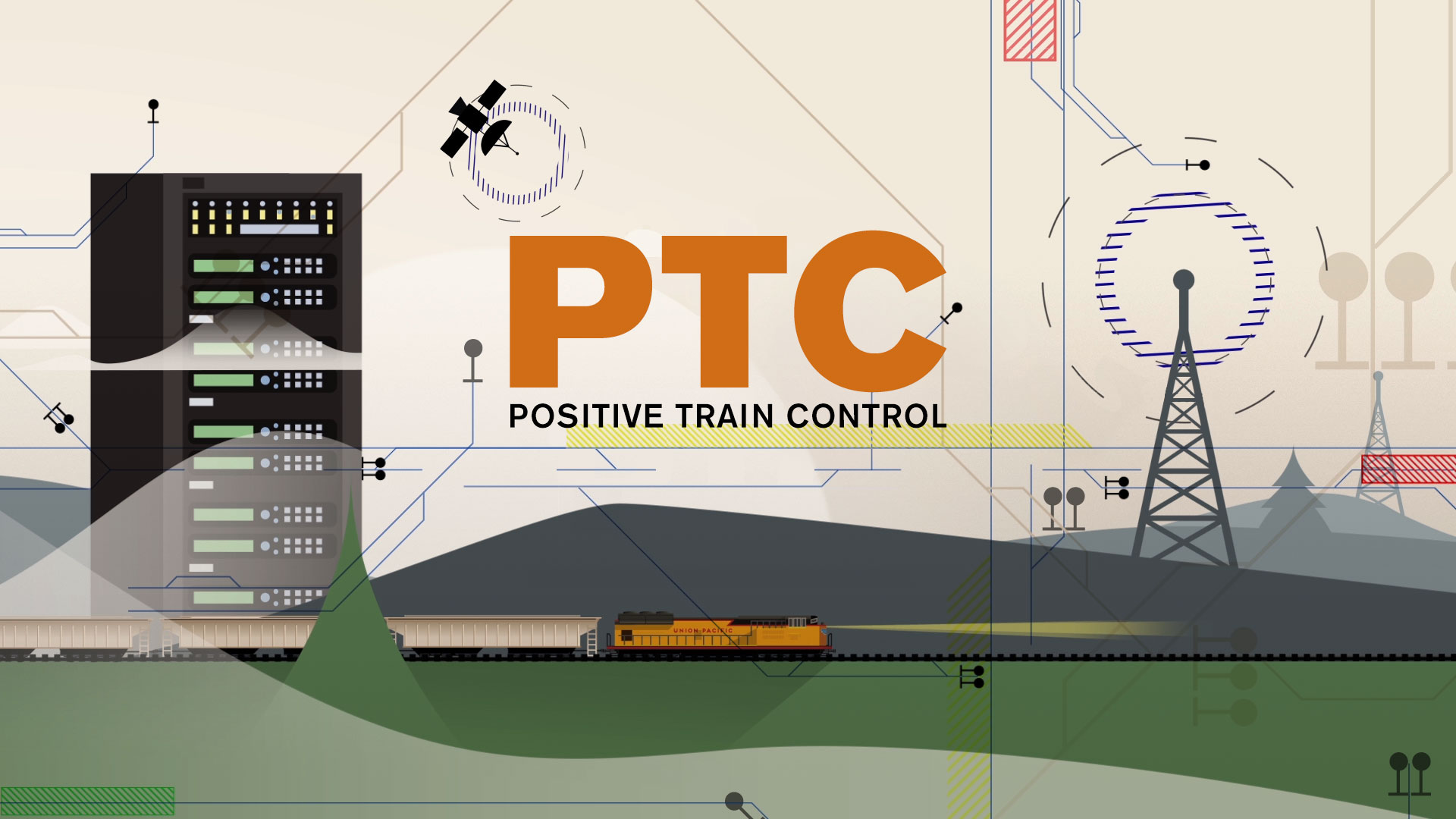 It's only fitting that as the 150th anniversary of the driving of the golden spike approaches – a monumental effort that joined a nation – that American railroads are implementing Positive Train Control (PTC), a technology framework that brings the rail industry into a new era.

After all, constructing the Transcontinental Railroad has been described as an effort akin to putting a man on the moon. Installing PTC is another out-of-this-world comparison, especially considering the sheer complexity surrounding everything needed to make it work.

The project's goal is a system that operates flawlessly over North American tracks, from sea to shining sea. PTC synchronizes equipment from different manufacturers and changes the way an industry operates.

Union Pacific's PTC-required footprint is the largest of all North American railroads, encompassing more than 17,000 route miles, roughly 45 percent more miles than the next largest railroad, and enough track to cross the U.S. nearly seven times. When fully implemented, it will be one of the largest operating PTC networks in the world. The company plans to spend an estimated $2.9 billion to complete the project.

PTC reduces the risk of human error-caused incidents, creating an extra layer of safety for railroaders and communities.

• train-to-train collisions,
• derailments due to overspeed,
• operating a train through a switch in an unsafe position, and
• unauthorized entry into active work zones.

The system prevents these accidents by warning the train crew first and then, if they don't respond, taking control to halt the train before an incident can occur. PTC does not prevent accidents related to broken equipment, track structure failures or instances in which cars or people are on the tracks.

The key to PTC is connectivity between all the equipment involved in operating a train (see video). In an era when people carry palm-sized data centers in their pocket, it's hard to imagine a network requiring a deeper level of connectivity than already exists. GPS or cellular networks seem like the obvious choices to connect PTC, but they're not accurate or reliable enough.

"You're only as safe as the database map," said Greg Richardson, Union Pacific senior manager of operating systems. "And GPS accuracy errors exceed the spacing of our parallel tracks."

Google Maps can't differentiate between lanes on a highway, illustrating why GPS isn't able to tell which track a train is on. "As for the cellular networks, we don't own and can't control them," Richardson said, "and WiFi isn't available everywhere. We operate in some really rural areas." 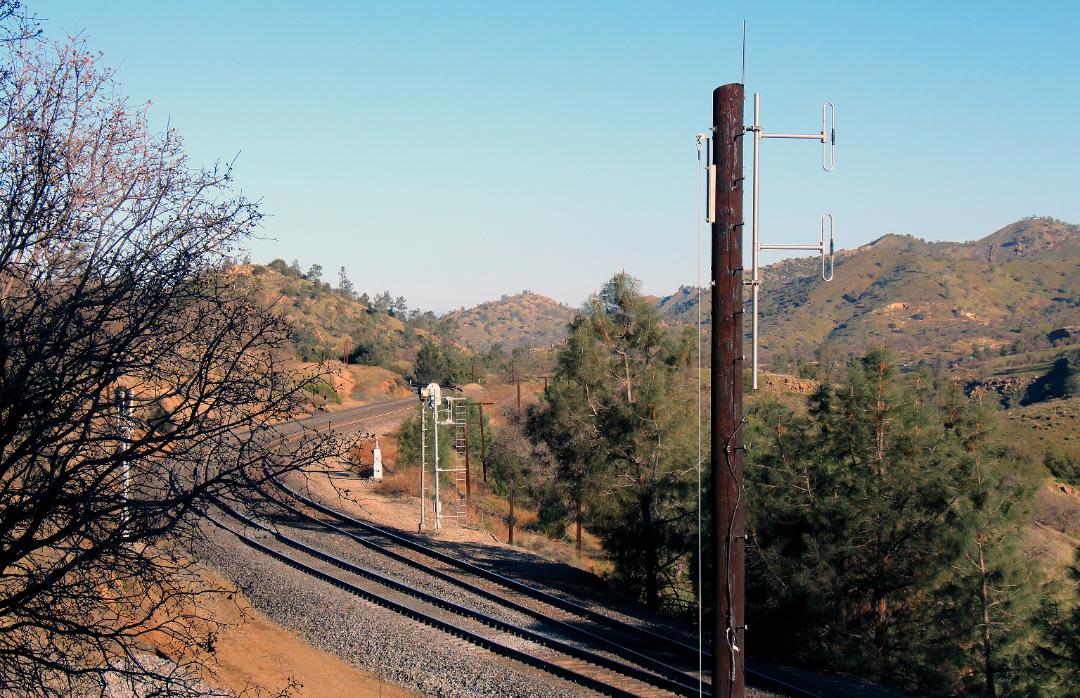 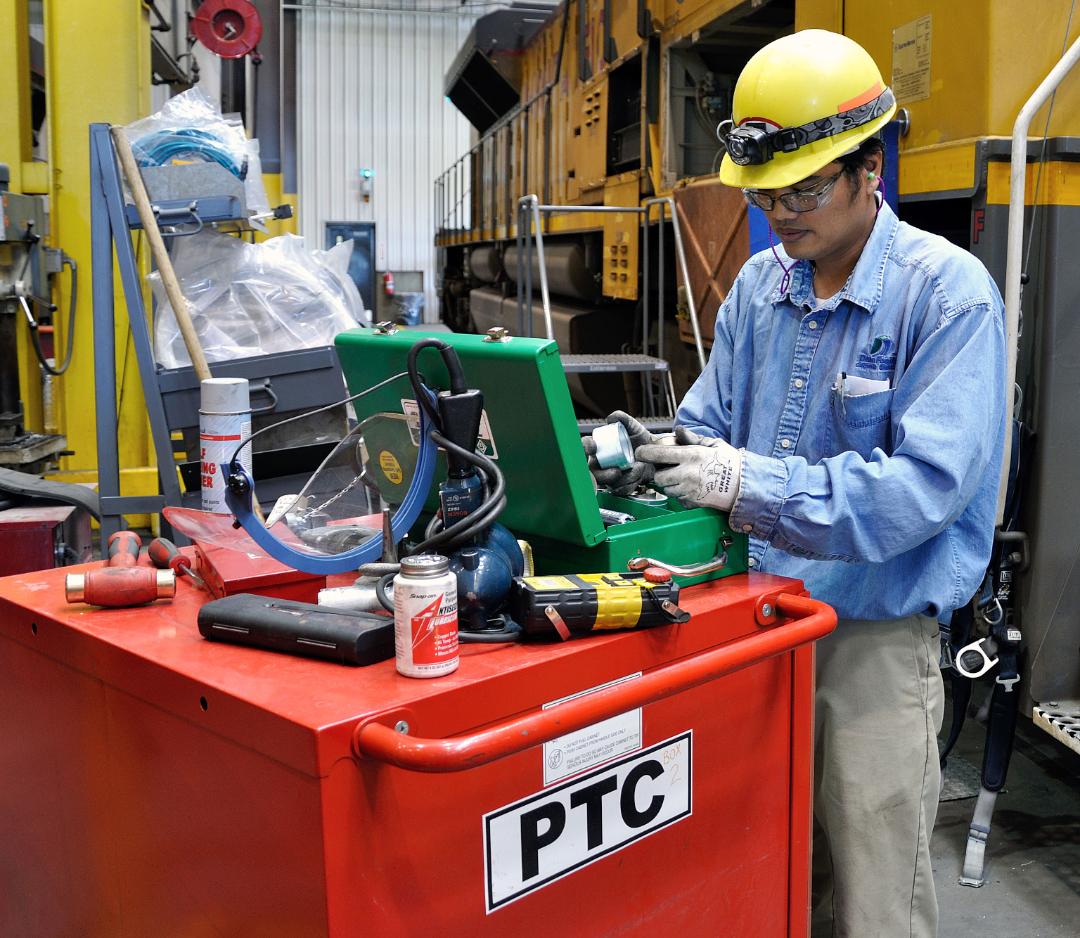 One of thousands of PTC wayside radio antennas installed near Tehachapi, California.

To make PTC work, U.S. railroads had to create a new communication system built on an old but extremely reliable technology: radio.

Union Pacific and several other railroads came together to research establishing a common frequency that wouldn't interfere with other radio operations. "We did a lot of research into which frequencies were available nationwide," Richardson said. "Eventually we all acquired a license to that spectrum – or set of frequencies – at a cost of tens of millions of dollars."

"This group, which was largely the same group of railroads who acquired the radio spectrum, then jointly acquired a radio technology company called Meteorcomm to conduct the research and development required to invent and productize the radio spectrum for PTC communication systems," Richardson said.

With that out of the way, next the railroads had to build a massive radio network, which Richardson called "one of the biggest PTC challenges."

"We had to install thousands of poles, hundreds of base stations, tens of thousands of locomotive and wayside radios and antennas, and refurbish some wayside signals, and, by the way, we had to invent it all."

Stringent environmental standards had to be met for every radio pole installed, each requiring large lead times, studies and fees. Union Pacific's network has large areas of track that overlap Native American reservations, requiring an even more extensive vetting process.

Environmental studies and vetting processes are something Union Pacific's Telecommunications and Information Technology departments are used to, but this effort was certainly larger than most.

All the while, the clock was ticking. The Rail Safety Improvement Act, signed into law Oct. 16, 2008, originally established a December 2015 deadline for PTC implementation on all U.S. railroads

"We didn't have the option to deploy this technology at the rate for which the technology would naturally mature," Richardson said. "We were marching against a deadline. In 2012, we were trying to invent and install technology that was supposed to be fully operational by the end of 2015."

Union Pacific implemented its first operable section of PTC Dec. 28, 2015. By then Congress had extended the deadline by three years to Dec. 31, 2018, with the opportunity for railroads to apply for an additional extension if they meet certain criteria.

As of December 31, 2017, 100 percent of Union Pacific's more than 800 required base radios towers and the thousands of associated antenna poles have been installed.

Creating the radio network wasn't the only barrier to completion. Union Pacific has to install computers on more than 5,500 locomotives – some of which were manufactured before the first personal computer existed. It takes about 150 working hours to equip one locomotive with PTC technology.

"In addition to the on-board computer, our mechanical department also is installing new radios, antennas and other communication systems," Richardson said. "We have an army working on the locomotives."

Installing each piece of equipment is specific to the class or type of locomotive – from the way the system interfaces to the locomotive, the physical location of the equipment, to where the black box is located.

"It is like retrofitting an airbag to every car on the road," Richardson said, "everything from a '55 Chevy to a brand new car. It's a different process for every version."

With all hardware in place, configuring all the software comes next, a new challenge that Richardson says keeps him up at night.

Have you ever updated the software on your mobile phone and "bricked," or completely disabled it? Imagine bricking the U.S. economy because 5,500 locomotives are inoperable.

"The PTC software is in its infancy, so the amount of testing we do is epic," Richardson said. "Lab testing, field testing, ensuring new software does what it's supposed to and doesn't introduce new problems is a huge undertaking. It's too easy to push a button and break something."

With a solid handle on the new radio network, equipment installation process and software creation, maintenance and distribution, the final barrier to overcome is PTC interoperability among passenger, shortline and other Class 1 freight railroads. Union Pacific has more than 40 tenant railroads operating on its lines, blending all these tenants into a seamless network will be the most difficult part of creating a fully implemented PTC system.