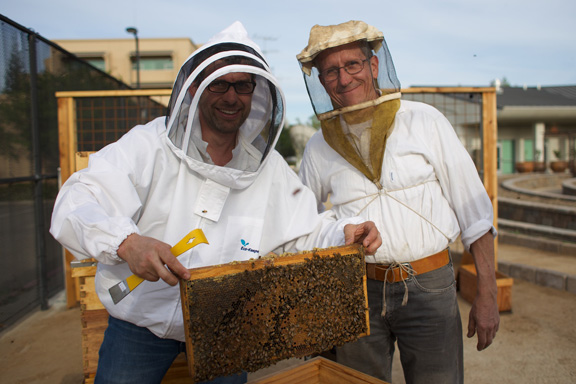 Huw Evans, founder and managing director of Arnia, left, and Jeff Harris, Sacramento councilman and long-time beekeeper, display one of the hives at the community garden.

Nestled below cobalt blue skies on the southernmost tip of Sacramento’s California State University campus lies half an acre of freshly tilled hope.

The new Capital Public Radio Community Garden sits outside the back doors of the Sacramento radio station KXJZ 90.9 FM. Spring finally has arrived, and drought-resistant native grasses are the first plants making an appearance around the new garden. The grasses are part of a thriving ecosystem, designed to educate a community of 550,000 about food.

Blake Young, the president and CEO of the Sacramento Food Bank and Family Services, hopes the new community garden will increase public awareness surrounding food and health issues. "Capital Public Radio is a public institution that works with us to help reach our clients," Young said. "The community garden is an additional education resource for folks who don’t have the means to learn about basic nutrition. As an added benefit, our program will receive some of the fresh produce. We’ll be able to distribute more healthy food to our clients." 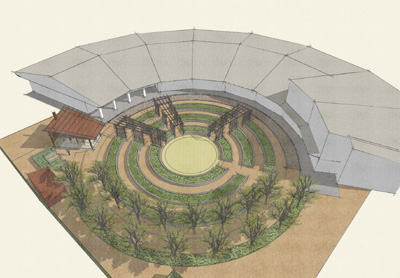 This artist illustration shows a bird's eye view of the Community Garden.

With education, and the new garden, the goal is to help curtail the obesity epidemic, stem the rise in healthcare spending, and address the Sacramento area’s food insecurity issues – all while saving 200 gallons of water a day.

"The Union Pacific Foundation provides grants to support a wide range of projects that positively impact a community’s quality of life," Stark said. "A community garden has the ability to improve the environment by sourcing food locally. It also provides nutrition resources to neighborhoods that might otherwise lack markets stocked with fresh food, which will create new life-long healthy habits."

The state-of-the-art vegetable and fruit garden is the brainchild of Craig McMurray, the managing director of foundations and corporate development for Capital Public Radio, and his dedicated team.

California is the largest agriculture-producing state in the United States. In 2013, the state had 81,500 farms and ranches that generated $43.5 billion in revenue. Despite this bounty of food, hunger remains an issue in Sacramento, the state capital.

"We have roughly 245,000 people just in the Sacramento County area that deal with food insecurity issues on a daily basis. The hunger issue is very real here," McMurray said. Food insecurity can be defined as living in an area without access to fresh fruits and vegetables – called a food desert – or having such a low income level that it can result in missed meals.

To reach these families, the food bank shifted from the traditional food bank model seven years ago. "We started a mobile distribution program," Young said. "There are now 12 distribution points all over the county. We roll in and hold a farmer’s market."

Young believes there is a huge correlation between what people put in their bodies and the rise of chronic illnesses. "We were seeing, particularly in low-income and poverty-stricken areas, that people were developing ailments like diabetes," Young said. "The feedback from their doctors was that it’s caused by their diet." 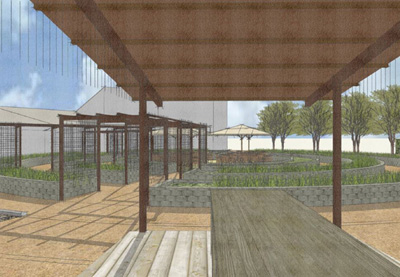 This artist illustration shows a ground-level view of the Community Garden.

According to the World Health Organization, the United States spends more money per person on health care than any other nation in the world. Despite that spending, instances of chronic diseases, such as heart disease, some forms of cancer, diabetes and obesity, are on the rise. These ailments can be prevented by making healthier lifestyle choices. McMurray hopes by helping children make healthier choices at an early age, the ballooning of these statistics could be greatly reduced, if not reversed.

"Our healthcare system will spend about 1.3 trillion dollars this year treating metabolic disorders, most of which are diet-related," McMurray said. "We see this garden as a platform to really inspire and educate people about how food is grown, what real food looks like and how it’s supposed to taste."

Health and hunger aren’t the only issues the Capital Public Radio garden is trying to solve.

In the United States, the number of honey bee colonies has been dropping dramatically over the past 10 to 15 years – down 23 percent last year and 30 percent the year before. According to a recent Capital Public Radio interview, this dramatic decline in bee health is due to a variety of issues,including pesticides, parasites and human interference.

"Colony collapse is quite a specific problem where bees literally disappear from their hives," said Dr. Huw Evans, a world-renowned bee expert and founder of ARNIA, a company that specializes in remote hive monitoring systems. "This particular problem was seen a lot in California."

Disappearing honey bees are a problem because they play a fundamental role in agriculture, and ultimately, our food supply. Humans can provide the nutrients plants need to grow and water to stay hydrated, but they can’t pollinate plants. That’s where bees come in. Without pollination, plants are unable to produce seeds. If bees continue to disappear, plants won’t be able to reproduce, and humans will be in serious trouble. 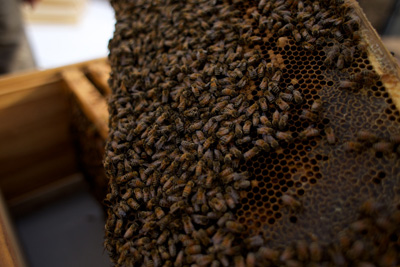 A look inside one of the community garden bee hives.

To combat the problem, Dr. Evans recently installed four bee colonies in the Capitol Public Radio garden. Each colony will house 60,000 bees. Inside the hives, web cams and microphones were installed. This technology will be used not only to keep the bees healthy, but also as an educational tool for Sacramento’s inner-city schools, including Theodore Judah Elementary School.

"For several years now, our school has had a very extensive instructional garden program called Science Alive," said Corrie Buckmaster, principal of Theodore Judah. "We have a garden curriculum that complements our standard-based classroom instruction. We’ve partnered with Capital Public Radio to promote our school garden program. The philosophies that we convey to our students are in line with their vision for the new garden."

Because of the live hive feed, the school is broadening its education about pollinators. "While our students are learning the importance of pollinators in food production, the community garden bees will deepen our students’ understanding of how much we depend on them, " Buckmaster said. "When we understand how important bees are to our food supply, it helps us make different decisions about pesticides, how we maintain our land, and how we protect our water. This program teaches about the cycle of connectedness within our ecological system."

A Union Pacific Foundation grant to Capital Public Radio in Sacramentio, Calif. helps support the Community Garden. The Community Garden not only helps address the issue of hunger in the region, but raises awareness of honey bees.

Amid all this doom and gloom about hunger and dying bee populations, it can be difficult to educate and inspire – something McMurray’s team is determined to do. 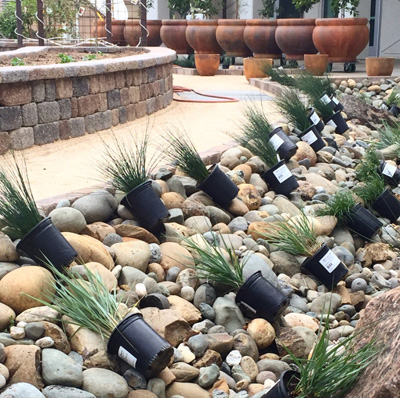 "Our mission is to inform, educate and inspire people on the issues that matter most in their lives. As a media organization, we can amplify many of these issues in an apolitical, non-partisan way. What matters more than food?" McMurray said.

Over the next few months, fruits and veggies will be planted in the freshly-tilled soil, and the garden soon will be teeming with activity.

Beyond the new life the garden will generate, McMurray sees a lot of hope for the future. "We have a unique opportunity to move the needle here," McMurray said. "Overtime, we’re going to eventually have an opportunity to impact not just the health of our region, but the health of the country as a whole. You know … California IS the bellwether state."