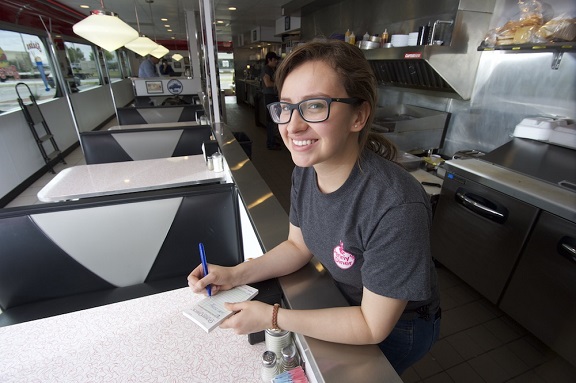 A year after the grand opening of Union Pacific's Santa Teresa New Mexico Fueling Facility and Intermodal Terminal, the desert town has become one of the state's hottest industrial areas.

Inside, a waitress is busy hustling tables amid the crowded pleather booths and shiny Formica counters, while a fry cook mans a hot flat-top griddle sizzling with eggs and sausage for the morning crowd. Penny's assistant manager Irma Alvarez, who also runs the hotel, says the restaurant serves breakfast 24 hours a day, but that the house specialty and customer favorite is still the Monster Burger, which comes with an egg and double meat patties.

"Our burgers are really popular here," Alvarez said. "As are the shakes."

Business is brisk. The restaurant's patrons are mostly Union Pacific railroad employees who work at the nearby Santa Teresa Fueling Facility and Intermodal Terminal. In fact, the restaurant and the hotel originally were built to meet their lodging and dining needs. But lately the clientele has become more diverse.

A year after UP's intermodal terminal and locomotive fueling facility officially opened in April 2014, Santa Teresa has become one of the state's hottest industrial areas, building upon the momentum that began when the railroad started planning the new facility years earlier.

Jerry Pacheco, who operates the Border Industrial Association (BIA), which represents the industrial base from Santa Teresa to Las Cruces, New Mexico, calls it the "Disneyland Effect."

"Think about all the businesses that popped up around Disneyland," he said shortly after finishing his own Monster Burger. "The curio stores, the T-shirt shops, the gas stations — they're not associated with Disneyland, but they want to be there because it's an attractive place to be."

Penny's Diner with The Oak Tree Inn to the right. The restaurant and hotel were built in part to support Union Pacific lodging needs.

When it comes to Santa Teresa, there are two Disneylands. One is the Union Pacific facility; the other is computer maker Foxconn, whose factory sits on the other side of the Mexican border just a few miles away.

"We're sandwiched between these industrial zones, between these two projects that have attracted international attention," Pacheco said. "If your company is here, you get superior logistics. You have the capability of doing business on the other side of the border. There's no better place to be, and that's the Disneyland concept."

To prove his point, Pacheco rattled off a list of companies that have either been established or grown since UP announced its Santa Teresa facility, including:

And, of course, Penny's Diner and the Oak Tree Inn. "We've got everything from warehousing to logistics and manufacturing," Pacheco said, "all located within seven or eight miles of the Union Pacific facility." 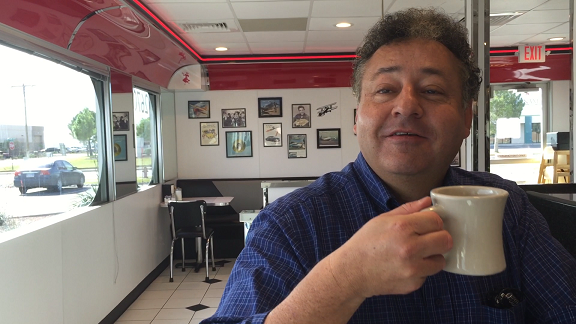 "Union Pacific gave us the opportunity not only to recruit existing businesses that came from El Paso, it allowed us to bring in new regional business," Pacheco said, now in full sales-pitch mode.

Pacheco showed off Santa Teresa's rapid growth with a tour of the area in his dusty SUV. The town is like a gigantic industrial park plopped down in the middle of a desert of sand and sagebrush, a grid of massive warehouses and beige office buildings located in a land with no trees. 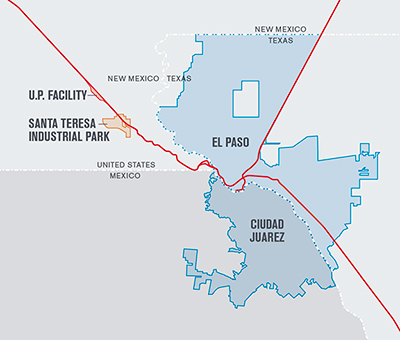 Like a tour guide, he pointed out each business and described its products or services. "That's International Wire, they make copper wire," he said with a sweep of his hand. "Right across the street is Southwest Steel Coil. They've had two building expansions in two years and have gone from 13 employees to something like 60."

Most of the buildings he pointed to were warehouses. Pacheco explained that many businesses ship raw materials or parts south over the border into Mexico and bring finished products back north to Santa Teresa and its miles and miles of warehouses.

In 2014, New Mexico led the United States in increased percentage of growth of exports to Mexico. "We almost doubled our exports to Mexico in one year," Pacheco said, "from $802 million in exports to $1.5 billion. Where is that happening? Right here in Santa Teresa."

A year after Union Pacific's intermodal terminal and locomotive fueling facility officially opened in April 2014, Santa Teresa, New Mexico, has become one of the state's hottest industrial areas, building upon the momentum that began when the railroad started planning the new facility years earlier. 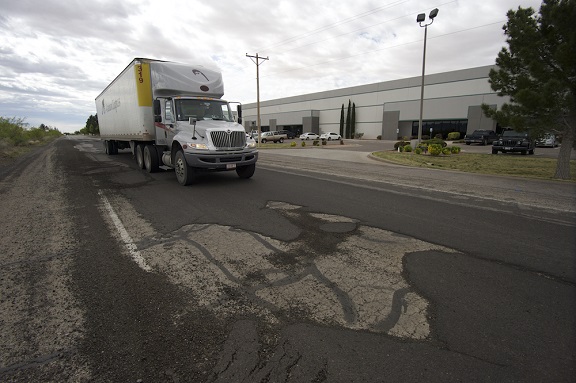 A close look at the surface of Airport Road, a main artery that connects the oldest parts of Santa Teresa's industrial park.

With such rapid growth in such a remote area, there are going to be infrastructure challenges. In 2011, the issue was a lack of water pressure due to a system built 25 years ago with little thought of today's business levels. "The more businesses we brought in, the more the water system was strained," Pacheco said.

The Business Industrial Association (BIA), of which Union Pacific is a member, worked with the county and state to develop a $12.5 million plan to upgrade the region's water and wastewater systems. But that wasn't the only concern.

During his tour, Pacheco pulled his SUV to the side of a particularly rough patch of Airport Road, a main artery that connects the oldest parts of Santa Teresa's industrial park. "Our biggest infrastructure focus right now is upgrading three roads, including this one," he said. "This road was built in 1988, and not very well. We didn't anticipate the amount of growth, and now it's getting torn up."

The obvious culprit is the constant stream of big-rig semi-truck traffic that passes to and from the warehouses, the border and UP's intermodal facility -- as many as 800 per day. Pacheco said proposals call for between $5.4 million and $8 million in construction funds to resurface and expand Santa Teresa's three major roads.

State and local officials are well aware of the problem. The BIA has hosted five interim legislative committees in 2014 that came to "kick the tires in Santa Teresa" and see what's going on. Pacheco said New Mexico Governor Susan Martinez has visited Santa Teresa 17 times in the past four years for ribbon cuttings and announcements.

Ed Hazelton, president of Twin Cities Services, agreed the streets are badly in need of attention. He drives them every day to his office in the heart of Santa Teresa's industrial park.

Twin Cities Services, Inc., a container haulage, storage and logistics company that counts APL, OOCL and NYK among its customers, is a prime example of a business that came to Santa Teresa because of UP's move from El Paso. "We started looking at property out here in 2007 because we had heard rumblings in those days that the UP was thinking about moving out here somewhere," Hazelton said.

His company bought 32 acres of land and opened its facility in 2013. "When we first moved in here, everybody told me, 'You're going to be out there for the next 20 years. You're not going to see a soul.'" Hazelton said. "I said 'I don't think so. I think in five years you won't recognize the place.'

"Let's face it, UP's presence is going to change the whole concept of everything that goes on here. Without the UP here, I don't think any of us would be here. There'd be no reason to be out here." 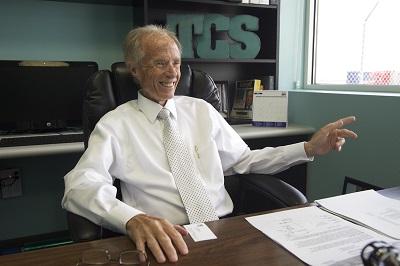 Tell that to Jerry Groen, the operations manager at Southwest Steel Coil, Inc., whose company began operations in Santa Teresa 14 years ago. His company buys 45,000-pound steel coils shipped via rail from the coasts and upper Midwest to its Santa Teresa facility, where they're cut into sheets and sold to customers for assembling, usually by companies located in Juarez, Mexico.

"The biggest component of staying cost-effective is to get the material here via rail," Groen said. "The second component is finding the right customer mix."

Since UP's Intermodal Facility opened, Groen said rail service has improved dramatically. "Today we got six rail cars, so we're getting on average 15 to 20 cars per week," he said. "In a nutshell, I'm kind of happy to see UP's Intermodal facility up here because overall it was a good thing for us, even though (the intermodal facility) doesn't serve us directly."

In fact, the economic ripple effects of UP's facility go well beyond the companies the railroad serves. Groen said you have to go back to the '90s to see as much economic activity as Santa Teresa currently is experiencing. "In the last 12 to 18 months, it's just a whole different mix," he said. "I came down here in '98. The changes that we're seeing are dramatic. Being a long-term resident of the park, it will be kind of interesting to see what we're talking about a year or two years from now." 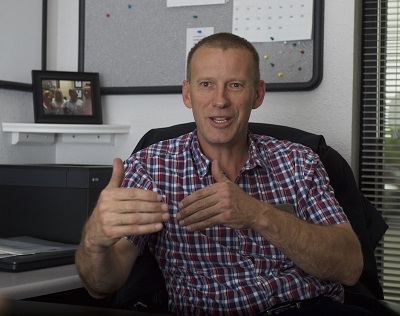 Jerry Groen, operations manager at Southwest Steel Coil, Inc., a company that's been in Santa Teresa for 14 years. "In the last 12 to 18 months, it's just a whole different mix," Groen said of the local economic activity.

Even more dramatic changes could be on their way with the creation of the Westpark Logistics Center, a 166-acre development christened just last month. It will be one of the largest industrial parks in New Mexico -- and the closest to UP's intermodal facility -- Westpark's first tenant will be MCS Industries, a U.S. picture frame manufacturer. The company announced the construction of an $11.1 million, 215,000-square-foot facility to replace its existing Santa Teresa facilities.

Needless to say, Pacheco is pleased. Not only does he have a new industrial park to sell, but the new MCS development will free up another 200,000 square feet of much needed space in Santa Teresa's older, sold-out industrial park. Don't expect the space to be available too long.

"Companies ask me, 'What's my investment going to be worth in 10 years?'" Pacheco said. "Well, it's going to be worth quite a bit because this is a hot place, and if you buy in early and you build your plant here, you're going to be in a sweet, sweet position. The value's not going to go down, and we have so much room around Union Pacific, there's still plenty of time to come in and set up your plant."

And while you're in Santa Teresa looking for your perfect future plant location, don't forget to stop in at Penny's. The cheeseburgers are the best in town. 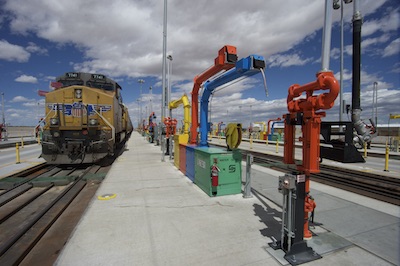 One of the locomotive fueling areas at Union Pacific's Santa Teresa Fueling Facility and Intermodal Terminal.