Members of the South St. Paul Mayor’s Youth Task Force line up for the city’s summer parade. A float that featured the remains of a truck after it collided with a freight train was used to emphasize the importance of crossing safety.

Now for 2015, the task force has a new goal. Read about the group's success here.

In January, the group, comprising several kids from grades 5 through 12, was awarded a $5,000 Public Safety Grant from Union Pacific. "Union Pacific gave us a grant to promote crossing safety," said Deb Griffith, the city's community affairs liaison. "The mayor and I decided it would be a great initiative for the Task Force." 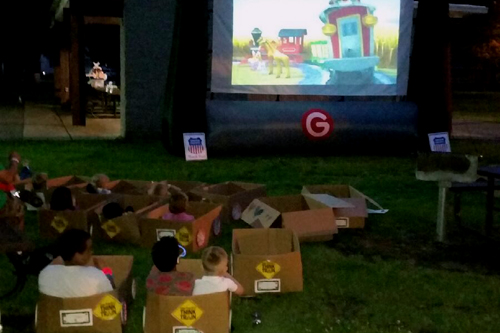 Children take in the movie “The Little Engine that Could” while seated in their homemade boxcars. Each boxcar features a “See Tracks, Think Train,” sticker on the back.

Armed with the grant, the task force worked with the Union Pacific Police to develop a year-long plan that includes several fun events. Some of the highlights:

During the parade, Griffith noticed that their shocking parade float prompted parents to have conversations with their children. "As we were handing out suckers, we heard a lot of parents talk to their kids about the importance of watching the crossing signals when they approach the tracks," Griffith said. "It's one of those generational things. When we asked the younger kids on the task force -- the 5th, 6th and 7th graders -- they hadn't heard anything about train safety. This concept was completely new to them. They were shocked that it was illegal to walk on railroad tracks." 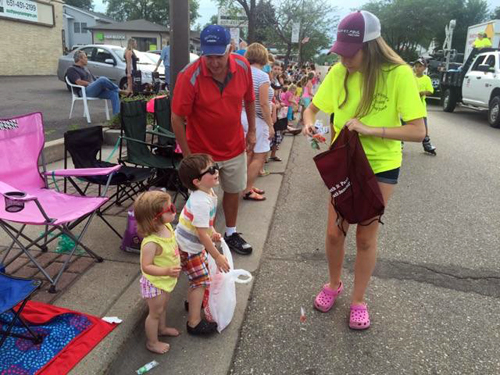 Emma Lewis hands out “safety suckers” that say, “It’s no contest. Every day, people are injured or killed trying to beat a train.” The Mayor’s Youth Task Force handed out 8,000 suckers during the parade.

Since the kids had seen people take photos on the tracks, they assumed it was OK. "One day we had a really good discussion about the dangers of it," Griffith said. "By the time we were done, they agreed that it's a stupid thing to do. Based on that discussion, we decided to focus one of our planned public service announcements around the whole idea of not wearing ear buds near the tracks. That message seemed to resonate."

There's no doubt that, thanks to the task force's efforts, South St. Paul's youth will know how to stay safe near the tracks for years to come.