West Coast Ports: We’re Open and Ready for the Rebound 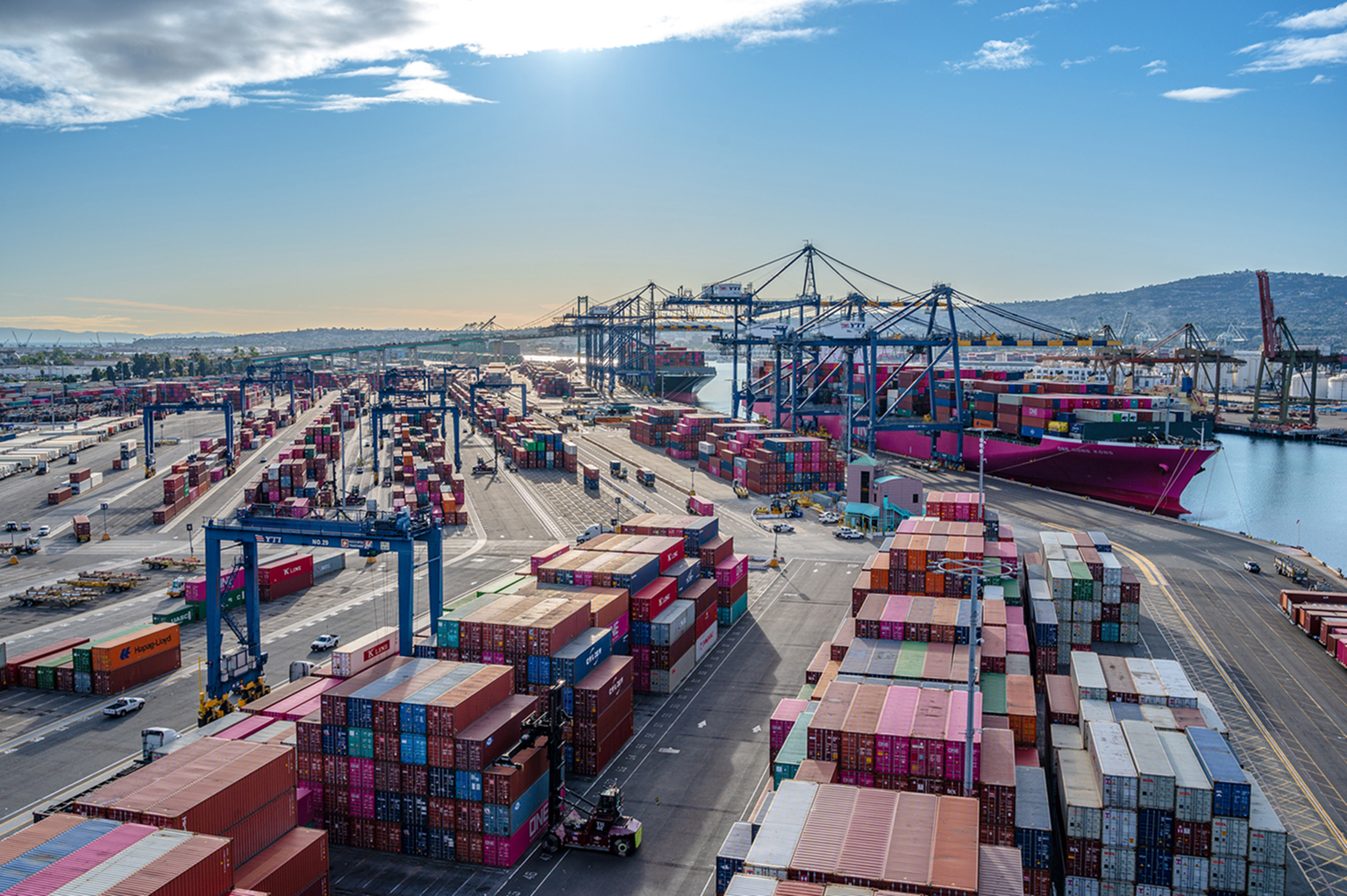 The year started on an optimistic note for U.S. ports, railroads and businesses anticipating an improvement in international trade, thanks to the signing of the Phase One Trade Deal with China. And then COVID-19 happened. China’s annual factory shutdowns for the Lunar New Year lasted longer than normal, causing a drop in supply. Although overseas factories are coming back online and supply is returning, the recovery period for U.S. demand is unclear.

Estimates show imports at major U.S. retail container ports dropped to their lowest level in five years in March. Many companies are canceling or modifying orders, and imported products, such as clothing and electronics, are stacking up in storage facilities.

In the midst of all this, Union Pacific and its West Coast port partners are keeping the supply chain moving for medical supplies and other essential goods coming into the U.S. from Asia. The ports of Los Angeles and Long Beach make up the San Pedro Bay complex, handling 25 percent of all U.S. exports and nearly 40 percent of containerized imports. Right now, it's the fastest way to get masks, gowns, gloves and other critical personal protective equipment into the country.

Union Pacific and the ports of Los Angeles and Long Beach work together to support customers' needs and restart the economy as the world recovers from COVID-19.

"Medical supplies often move by air, traveling in the cargo area with the luggage passengers take on international flights," said Union Pacific's Jim Bishop, director-Premium, Marketing and Sales. "With very few flights, the capacity is limited, and we're seeing some of those goods come from Asia by ocean carrier, and then onto Union Pacific trains for dissemination to medical centers and communities nationwide."

Union Pacific's partnership and collaboration with the ports is critical to ensure community needs are being met, especially in a rapidly changing environment. In a typical year, approximately 60 percent of the railroad's international intermodal traffic flows from Los Angeles and Long Beach to Chicago and other major cities. Goods are moving in those corridors, although at reduced levels.

"We're focused on keeping our operations open, fluid and agile to the needs of globally-engaged American businesses," said Gene Seroka, executive director, Port of Los Angeles. "We have the technology, expertise, infrastructure and human capital to meet the needs of U.S. industry. With Union Pacific, we are well-positioned and ready to help America recover from this global crisis." 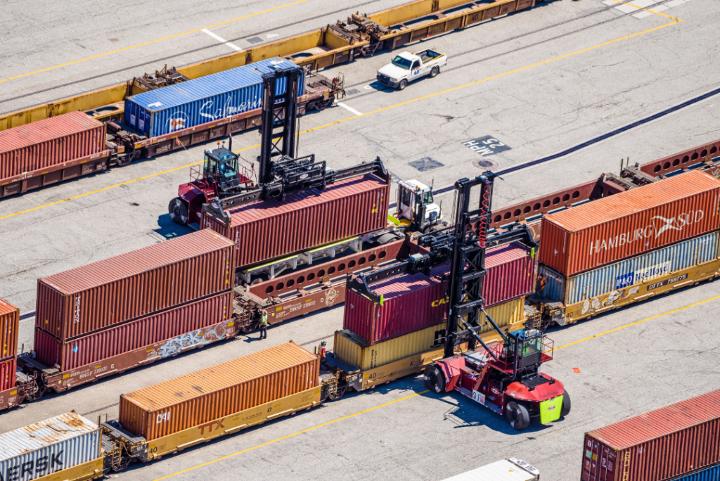 As pandemic restrictions lift and consumers begin feeling comfortable with returning to work, dining out and shopping, the ability to react to a surge in demand will be critical.

"We anticipate pent-up consumer demand for many items the railroad moves in intermodal containers," Bishop said. "We've all been sitting at home for the last six weeks, looking at the same things. People will want a new couch or end table, and many are ready to throw out their old clothes."

Union Pacific and its port partners have invested billions to provide available capacity, giving them the ability to quickly take on extra freight, and efficiently move it to distribution centers nationwide.

"As the most direct connection between Asia and every corner of the U.S., our West Coast seaports and our rail partners are prepared to deliver the efficiencies that will help the economy recover as quickly as possible," said Mario Cordero, executive director, Port of Long Beach. "The Port, Union Pacific and every other link in this supply chain stand ready for when demand returns." 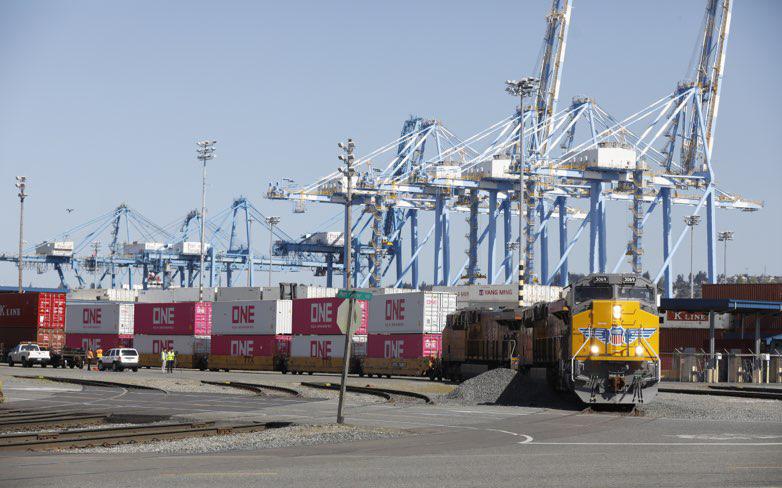 A Moment in Time

Union Pacific also serves three ports in the Pacific Northwest: Port of Tacoma, Port of Seattle and Port of Portland. The first two make up The Northwest Seaport Alliance, the fourth-largest gateway for containerized cargo moving between Asia and major distribution points in the Midwest, Ohio Valley and East Coast. It reports import volumes down approximately 15 percent while intermodal exports remain relatively flat.

"We know this is a moment in time, and volumes will return," said John Wolfe, chief executive officer, The Northwest Seaport Alliance. "Together, with our supply chain partners, we identified more than a dozen near-dock and inland container yards to help import customers manage delivery of inbound cargo and handle the increased volume that will eventually come as we recover from this virus."

One encouraging sign is much of Asia is restarting production. China also is purchasing U.S. grain as part of the Phase One Trade Deal, which is moving in intermodal containers from Union Pacific's Chicago terminal to the Port of Tacoma for export.

Despite uncertainty about what the economic recovery looks like and its timing, the West Coast ports all agree – they're open and ready for the rebound.

"We stand ready to handle any volume hikes as we continue to manage through these unprecedented and fast-changing conditions," Wolfe said.