Rising from the Ashes: Dry Canyon Bridge Rebuilt in One Month 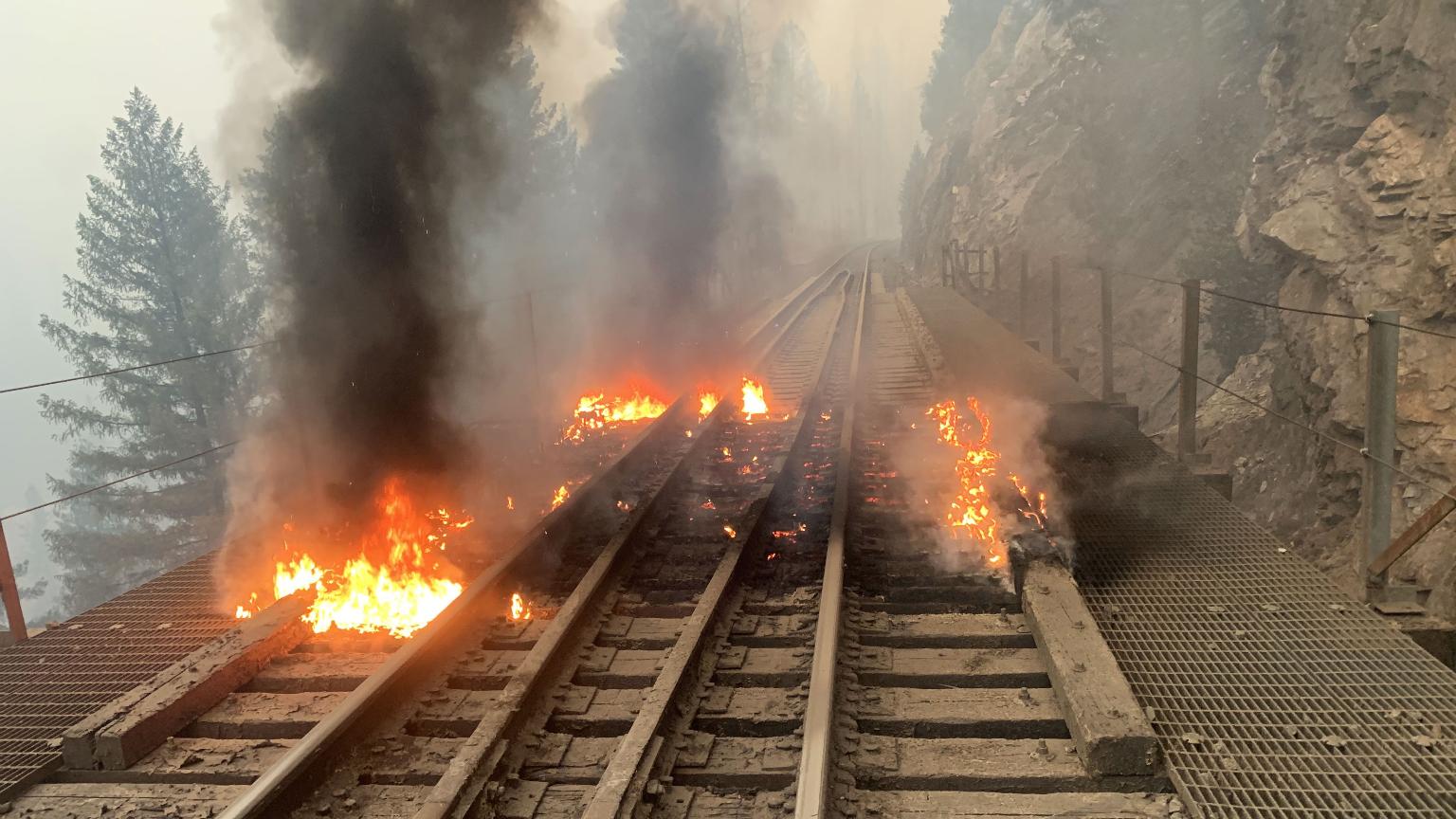 When the Lava Fire ravaged Northern California in late June, it decimated Union Pacific’s Dry Canyon Bridge, a structure spanning a remote valley on the railroad’s busy I-5 route. It’s natural to assume reconstruction could take months. After all, most bridges take years to design and build.

Then again, most bridges aren’t maintained by Union Pacific’s world-class Engineering crews. Together, employees and contractors worked more than 27,000 injury-free hours to restore service in just one month – reducing the initially estimated 60-day outage by half.

Union Pacific employees worked with contractors to safely reconstruct bridges impacted by the Lava and Dixie fires in Northern California.

“The impact this expedited timeline had on our network is momentous,” said Eric Gehringer, executive vice president-Operations. “Although our strong franchise enabled us to continue serving customers by rerouting traffic, it required extra crews, fuel and time.”

During the outage, Network Planning collaborated with Operating to minimize customer impact, calling on additional crews to reroute 221 trains; much of this traffic went through Salt Lake City, Utah. In total, the detours added more than 200,000 train miles to the network.

On the mountainside itself, Engineering tackled the daunting task of rebuilding the 1,200-foot structure.

Job No. 1: build an access road across the steep, rocky terrain to bring workforce and equipment to the remote site. Next, the team constructed pads to hold three cranes, ranging from 200 to 600 tons in lifting capacity, that were used to lower bridge spans to ground level – only one of the 19 spans didn’t need repaired or replaced. 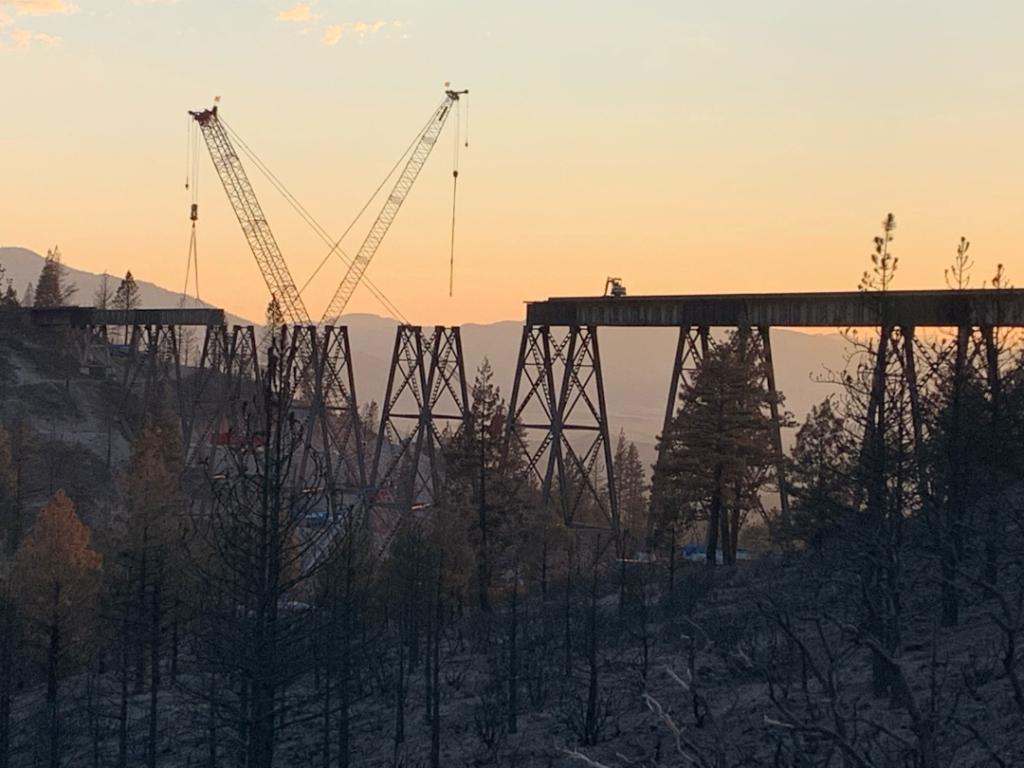 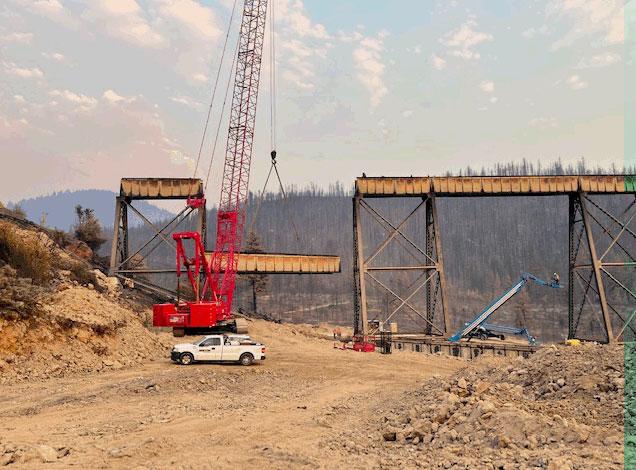 The team constructed pads to hold three cranes that were used to lower bridge spans to ground level.

Nine bridge spans were installed, while another nine were heat-straightened by a specialized contractor before being lifted back into place. Complete bridge reassembly required more than 700 new railroad ties, 58 tons of new steel and 1,140 track feet of ballast deck pans across the bridge.

After working around the clock, the team’s diligent efforts reopened the route 30 days earlier than anticipated without government or taxpayer assistance. Five trains crossed the bridge during its Aug. 1 soft reopening. 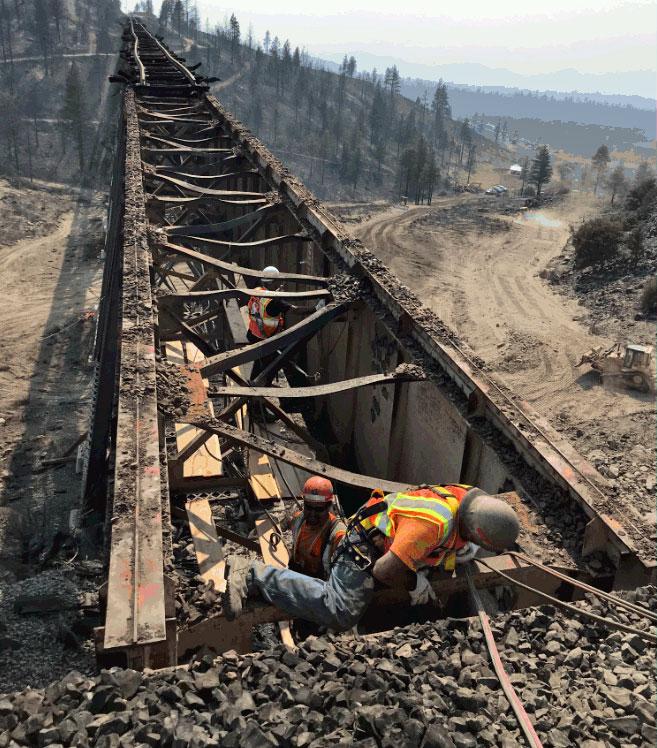 Union Pacific employees worked around the clock to restore service.

The Dry Canyon Bridge wasn’t the only victory – employees worked tirelessly in the Feather River Canyon to repair two bridges north of Oroville, California, damaged July 24 by the Dixie Fire. Both bridges reopened Aug. 1, also ahead of schedule.

“Our railroad’s cross-functional teamwork really shines during times of adversity,” said Abby Zach, superintendent-Train Operations, Transportation, Sparks, Nevada. “As we battled wildfires on three Northern California subdivisions over the past month, our team showed their passion, dedication and expertise as they worked to keep freight moving to our customers.”

Union Pacific spends more on its infrastructure than more than 40 state highway agencies.* Railroads top the charts as one of the most capital-intensive businesses today. 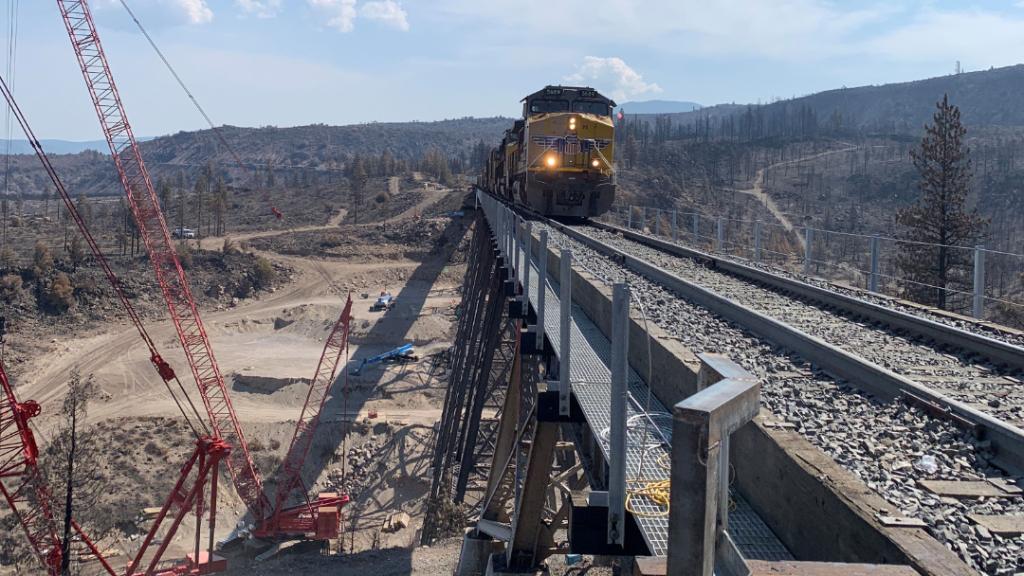 UP 5689 runs across the newly reconstructed Dry Canyon Bridge north of Redding, California, during its soft reopening Aug. 1.

August 2, 2021 – Union Pacific’s Dry Canyon Bridge north of Redding, California, is open for business nearly a month ahead of schedule thanks to employees’ tireless efforts.

The vital I-5 route connecting Roseville, California, and Portland, Oregon, has been closed since the Lava Fire ignited the bridge in late June. Although initially estimated to reopen Sept. 1, Operating and Engineering’s around-the-clock efforts to repair the damage at Union Pacific’s own expense enabled the first train to cross the reconstructed bridge Aug. 1.

Five trains crossed the bridge during its soft opening on Sunday before Engineering completed surfacing work and additional inspections overnight. The bridge was officially put back into service at 7 a.m. Aug. 2 but maintains a five-hour daily curfew over the next eight days.