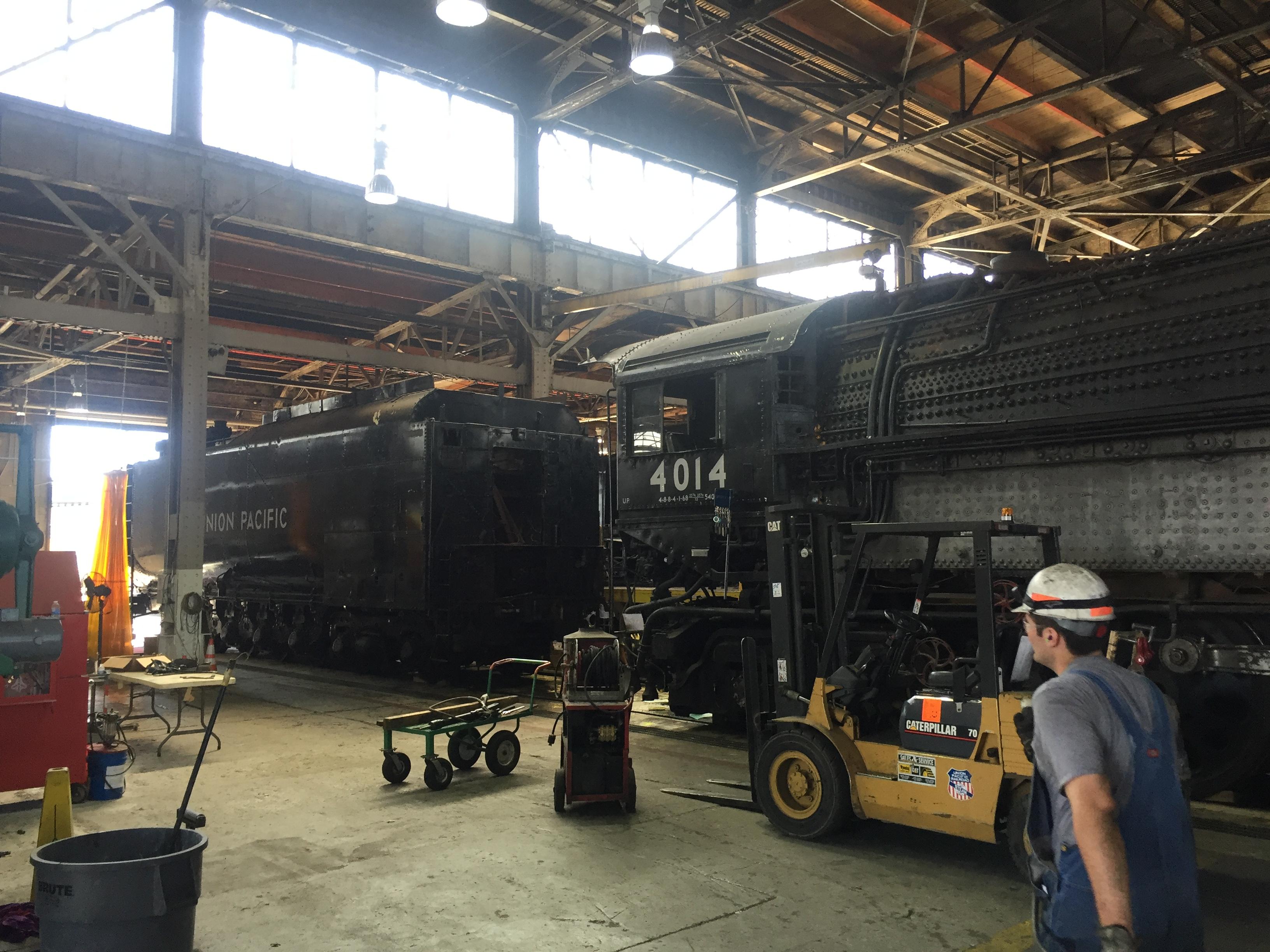 With the successful restoration of locomotive No. 844 in the books, the Union Pacific Steam Team has embarked on their next giant-sized challenge: restoring the Big Boy, locomotive No. 4014.

So how does such a large project begin? With massive disassembly, of course.

The engine and tender were separated first. The tender is the car that follows the steam locomotive. “It’s the fuel and water storage vehicle for the steam locomotive,” Dickens said. “It’s connected to the locomotive with two giant steel bars with 7-inch holes at both ends.”

Taking the Big Boy for a Spin

Locomotive No. 844 moves the Big Boy, locomotive No. 4014, to the turntable in Cheyenne, Wyoming, in preparation for the massive restoration project.

Right now, No. 4014’s tender car is designed to carry coal. The steam team plans to convert it to carry oil.

“The logistics of coal are very impractical for a big boy,” Dickens said. “It can be a fire hazard.”

When a locomotive burns coal, the coal eventually burns down to ash and cinders. Those cinders travel up and out the smoke stack – eventually raining down on all the surroundings.

“Imagine the voracious appetite of a Big Boy burning 28 tons of coal in a matter of hours,” Dickens said. “That’s a lot of ash and cinder. With an oil burner, the locomotive doesn’t produce this kind of debris.”

The Big Boy has a device on the engine and tender called a stoker. The stoker delivers coal from the tender to the firebox. Inside the firebox, the coal burns on a large grate. “It’s kind of like your backyard barbeque grill,” Dickens said. “Steam locomotives have a really industrial version of that. We’ll remove both the stoker and the large grate and replace it with an oil conversion apparatus.”

Dickens said the conversion is not as complicated as it sounds. “There’s a large iron casting called a burner with two cavities in it,” Dickens said. “The top cavity is for oil, the bottom for steam.”

Inside the cab, where the stoker control valves are located, the fireman controls the firing valve, which precisely regulates oil. When the fireman wants to develop more horsepower, he has to burn more oil.

As work begins on the tender and fire box, the team also plans to begin a detailed inspection of the boiler. “Like we did on locomotive No. 844, we’ll use an ultrasonic test device that uses sound waves to measure the thickness of every part of 4014’s boiler,” Dickens said.

With information gathered from the analyses underway, Dickens feels confident No. 4014’s restoration will be as successful as No. 844’s.

“We have a good plan,” he said. “When everyone starts to see it all come together, they’re going to get excited.”