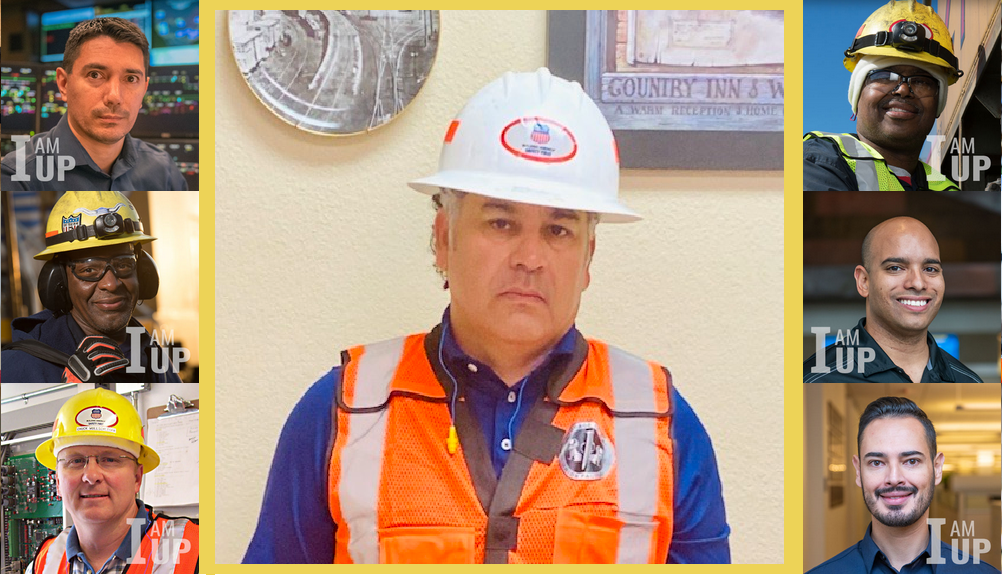 Some people wear their heart on their sleeve. Jesse De Anda wears his pride on his belt buckle, as he daily displays his family’s railroading history in a practical piece of apparel. 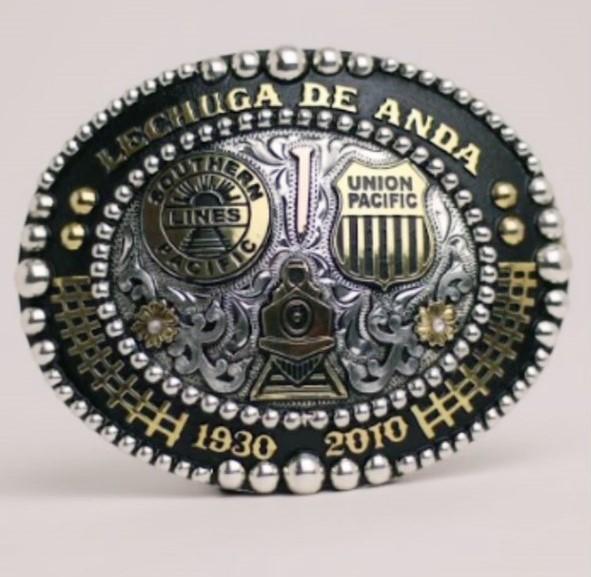 After immigrating to the U.S. from Sonora, Mexico, Jesus Lechuga joined a Texas railroad company in the late 1920s. By 1930, he was working for Southern Pacific in an era when steam power still reigned.

Lechuga hired on in LA before soon transferring to work the Round House in Yuma, Arizona. He met his wife in Yuma and started their family.

During the Great Depression, Lechuga would hop aboard a SP train and ride 50 miles to Gold Mine Curve, where he would pan for gold on his day off. On the days he found a gold nugget, his ten children would reap the rewards – enjoying hamburgers for dinner that night.

Pictured beneath the label, Jesus Lechuga and his work crew stand before a Southern Pacific steam locomotive in 1934. Lechuga is the grandfather of Jesse De Anda.

Lechuga built a 43-year career as a rail lubricator, watching the industry that built America evolve around him. His Maintenance of Way work crew played an important role, helping to ease rail corrosion caused by repetitive stress and friction from the immense grinding forces of the wheels on passing trains.

“My grandfather’s tools were a bucket and a brush,” De Anda said.

Lechuga would return home after a long day’s work with grease-stained clothes that required a good soak before De Anda’s grandmother could wash them by hand.

Lechuga has since passed on, but his railroad legacy lives on in stories told by friends and family.

Jesse De Anda, an 11-year employee also based out of Yuma, Arizona, protects the integrity of UP’s rail infrastructure just like his grandfather. In fact, if Lechuga worked the rails today, he’d work right alongside his grandson as they carry out the same job responsibilities decades apart.

De Anda’s work region, however, is much larger. He frequently travels, and maintains, a 200-mile stretch of the Los Angeles Service Unit from Yuma to Tucson, Arizona, a three-and-a-half hour drive each way.

Today, modern-day Maintenance of Way technicians like De Anda use solar panels to power electronics and hydraulics, doling out a consistent and controlled volume of lubricant.

After a long history of railroad innovation, De Anda takes pride in performing similar work to his grandfather. De Anda credits his grandfather with motivating him to make railroading a career.

De Anda celebrates his connection to his grandfather with a functional, yet decorative, belt buckle binding their legacies together.

Los Angeles Service Unit teammates may catch a glimpse of De Anda’s buckle adorned with the SP and UP shields, a golden spike, rail and a steam locomotive as well as the years they started working for their respective railroads.

This family’s railroad story continues to be written day by day as De Anda’s UP journey unfolds.

The ‘I Am UP’ campaign shines a spotlight on the brave women and men working beside us every day. Together, we are UP.