It takes a lot of digging and research to find a time when someone from Jeff Maxfield's family wasn't working for the railroad. In fact, the manager-Field Operations Support’s family collectively boasts more than 400 years of railroad service throughout five generations.

“It's kind of amazing to think five generations of us have worked for the railroad,” said Maxfield, who is headquartered in Denver to provide support for Transportation managers throughout the Great Plains Service Unit. 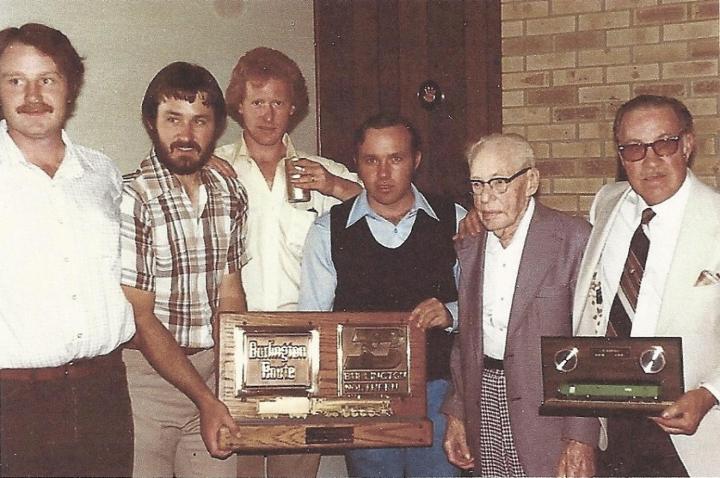 Pictured at a celebration for Jeff Maxfield's grandfather Wilbur's 1982 retirement celebration are, from left, Jeff’s uncle, Gary; his father, Fred; his uncle, Tom; his uncle, Danny; his great-grandfather, Floyd; and Wilbur.

His great-great-grandfather, August Swanson, was the first to work for the railroad - in 1897, he joined Chicago Burlington & Quincy Railroad (CB&Q) in Wray, Colorado. He had more than 40 years of service when he retired. August's son, Walter, followed and worked 25 years on a local Maintenance of Way section.

Jeff's uncle, Danny Maxfield, started working for the railroad as a conductor in 1969. Danny's son, Jason Maxfield — who is Jeff's cousin — started his railroad career in 2002. Jason has been a yard controller, dispatcher, chief dispatcher and then became a terminal manager. He now works as a dispatcher in Fort Worth, Texas.

“Everyone from my family now is retired from the railroad, except for Jason and me,” Jeff said.

Jeff's father, Fred, and Fred's brother, Gary, both worked for the Rio Grande as locomotive engineers and had a combined 66 years of railroad service. Another one of Jeff's uncles, Tom, worked for CB&Q for 33 years as a conductor/switchperson.

Jeff's second cousin, David, also worked for both the Rio Grande and Amtrak for a combined 35 years in the railroad industry.

Prior to beginning his own railroad career, Jeff earned two associate degrees in 2000 from Red Rocks Community College in software development and web design. He worked about a year in that industry before hiring on with the railroad and says, “the rest is history.”

“I've enjoyed this career,” Jeff said. “The railroad has provided a great life for me and my family.”