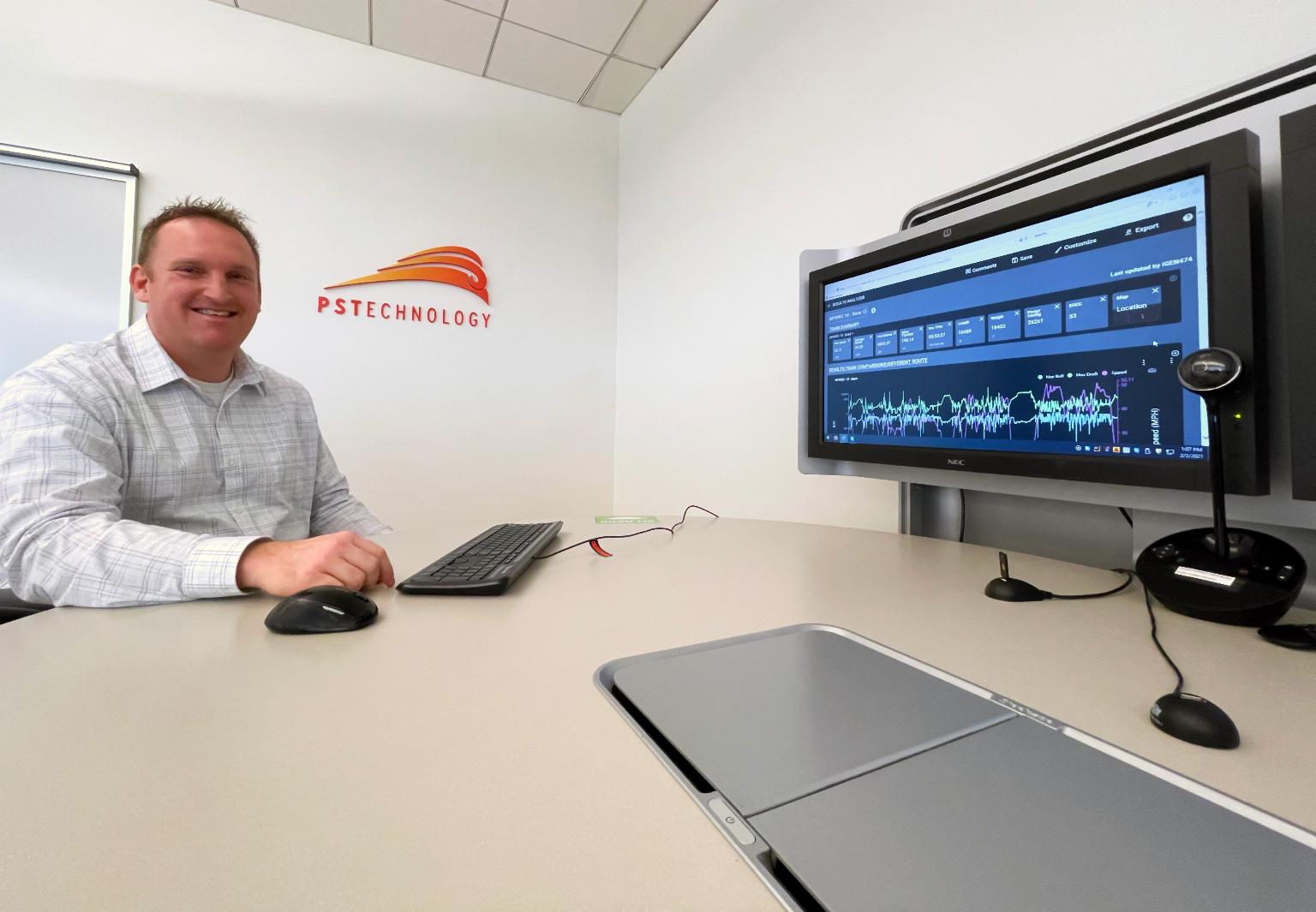 The physics involved in operating a freight train are amazingly complicated.

Think about it: Thousands of tons of metal rolling on steel wheels over steel rail at speeds up to 80 miles per hour over a variety of terrain – up and down different grades – in all kinds of weather. Each train hauls different commodities within its 100-plus rail cars each creating a multitude of in-train forces – the buff and draft pushing and pulling in every direction from rail car to rail car – all along the massive, miles-long moving warehouse.

For more than 150 years, yardmasters followed rules and best practices handed down over generations on how to build trains that safely operated from origin to destination in the most efficient manner possible under the guiding hand of a train crew. Now those train builders have a new tool to help them make safer, more efficient trains.

It’s called Precision Train Builder – or PTB – new technology that harnesses the physics associated with trains and train operation. In essence, PTB simulates trains and their operations over hundreds of miles of track compressed into minutes, accurately identifying not only where to place rail cars within a train, but how much “power” – i.e., locomotives – to use, and where to place that power within the train for the most efficient and safe operation.

“PTB is going to be a game changer in terms of train management,” said. Ryan Grudle, a systems consultant at PS Technology (PST) who spearheaded the project. PST is a subsidiary of Union Pacific.

A former Union Pacific train dispatcher, Grudle moved over to PST 10 years ago. Over the past three years he’s worked on simulation technology used to train locomotive engineers on train handling. He’s part of a PST Simulation team that consists of front-end developers focused on world-class user experience, back-end developers focused on train handling and simulation algorithms, a technical lead and a solution architect.

Through their work, the team realized the train simulator’s built-in physics engine was incredibly robust.

“Instead of simulating the train as a single entity, we simulated each piece of equipment individually, down to each wheel of each rail car of the train,” Grudle said.

Next, railroad Norfolk Southern, who uses PST’s train simulator (along with several other Class I railroads), had the idea of using the tech to simulate conditions that led to an incident such as a derailment. NS entered each piece of equipment into the simulator then ran it through the simulated route and discovered by simply moving a locomotive from the center to the rear of the train, in-train forces that caused some derailments were mitigated.

The PST Simulation team took the idea a step further.

“We enhanced the product to upload the event recorder logs from trains that experienced issues directly into the simulator, along with the train consist information,” he said.

Event recorder data provides every detail about how the train was handled, sort of like an airplane’s “black box.” When the simulation was run, the output not only showed in-train forces but also the effects of train handling decisions that could lead to problems.

“PTB allows you to create a train you want to run, then run it virtually across a territory in a fraction of the time needed,” Grudle said. “It can simulate a 300-mile train run in about eight minutes.” 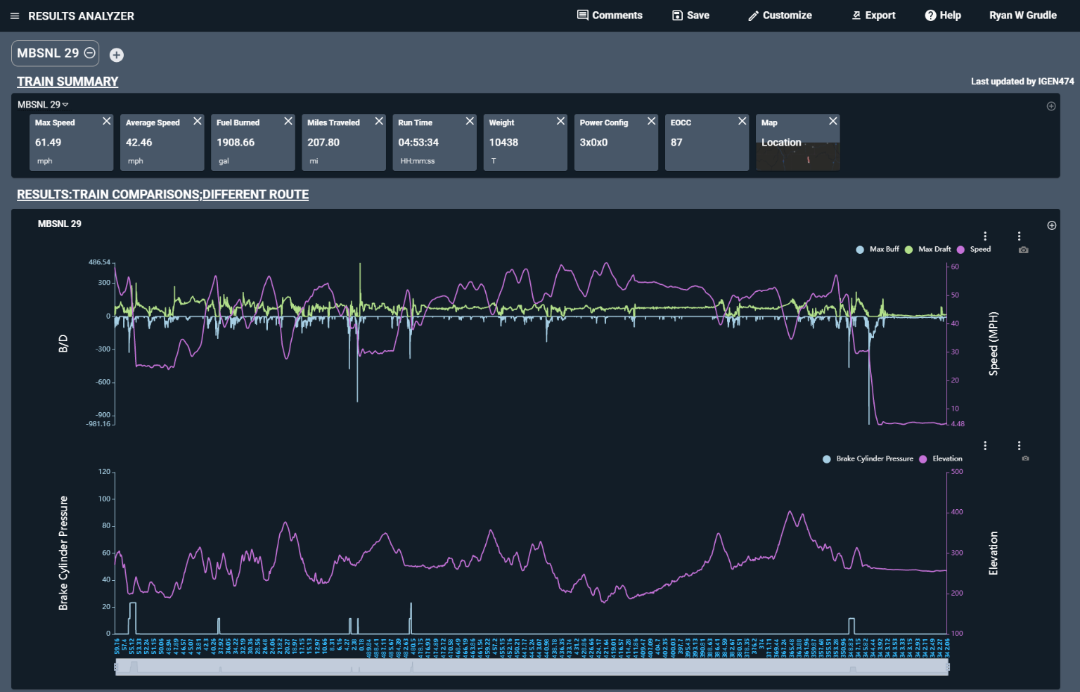 The physically accurate simulation becomes the ultimate predictive tool, allowing railroads to test trains before they operate. The result is the ability to run longer trains safely. This new technology is one reason Union Pacific has been able to increase its average maximum train length by 12% – to 9,154 feet – over the past year, resulting in much more efficient operations.

But there’s an additional safety benefit. PTB is being used by UP’s Safety Department to monitor train crews in real time as they operate over their territory, providing alerts when necessary, such as slowing down to reduce buff and draft forces. It’s called a Virtual Ride Along (VRA) and is being beta tested now with a target of monitoring thousands of UP trains on the company’s 32,000-mile network.

PST developed PTB working closely with UP’s Safety and Operating departments, including those who actually run trains. “Operating a train is a very complicated thing to do,” Grudle said. “Writing the AI to do that requires the mind of a locomotive engineer to get it right. It’s an ongoing, interactive process.”

Grudle envisions a time when every train will be validated by PTB technology prior to leaving a rail yard.

“One of the biggest challenges is making the simulations as fast as possible,” he said, “but if the simulations run too fast, you’ll lose a level of detail. We have to balance speed with accuracy, and accuracy is the top priority.”

He said the work is both challenging and rewarding.

“It’s fun,” Grudle said. “We’re directly impacting our company’s operating ratio, and any time you can make the railroad safer, that’s a feather in your cap. No one else is doing what we’re doing. To be on the cutting edge is a cool thing.”