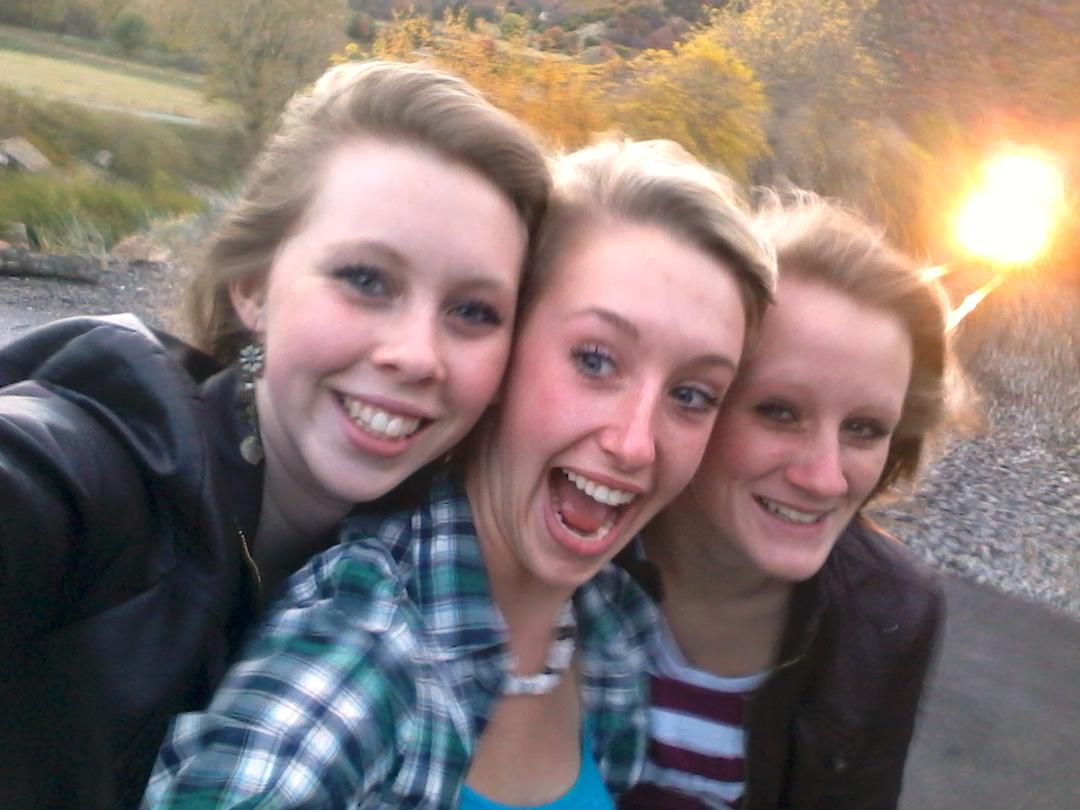 Kelsea Webster, 15, Essa Ricker, 15, and Savannah Webster, 13, did not hear the horn blasting as the approaching train's headlights created a halo in their final selfie.

Essa Ricker and Kelsea Webster, both 15, and Kelsea’s little sister, Savannah, waved at a westbound train crew and squeezed in for a selfie as it rolled through Utah’s scenic Spanish Fork Canyon October 2011.

"Standing right by a train ahaha this is awesome!!!!" posted Savannah on Facebook as the train's steel wheels banged along the track's steel rail.

The excitement in the trio's eyes matched their big smiles as the train fanned their blonde hair in the wind while they posed for the selfie—completely unaware of the approaching train coming from the other direction. The train's headlights were visible on the top right side of the photo.

"They were in their own little world," recalled John Anderson, train conductor inside the eastbound Union Pacific train locomotive. Engineer Michael Anderson, no relation to John, blasted the train horn to get the girls' attention. No response. Not even a flinch.

Trains traveling at 55 mph can take more than a mile to come to a complete stop after the emergency brakes are applied. A rush of panic, confusion and fear filled the locomotive as the train raced toward the girls at approximately 39 miles mph.

“We saw them for about 12 seconds until they disappeared from our sight and the train continued moving forward.”

"We watched in horror as we got closer," said John, recalling how both he and Michael yelled as if it might stop what they knew was about to happen. "We saw them for about 12 seconds until they disappeared from our sight and the train continued moving forward."

John raced back when the train finally stopped about a quarter mile down the track. The first girl he saw had no pulse and it was clear a second girl was no longer alive. John heard 13-year-old Savannah near the railroad crossing. She was hurt and agitated, but alive.

"I told her everything would be OK and she relaxed a little," said John, who held Savannah's hand until paramedics arrived. "I hoped she would make it and for some reason I really thought she would."

John made it home late the night of the accident. His mind would not stop replaying the accident and the devastation he found behind the train. John wanted to get drunk to escape, but fortunately his wife's good judgment convinced him not to. He wouldn't have been the first to find comfort in what could become a bad habit after experiencing a fatal train accident.

Fatal train accidents are devastating for families forced to deal with a sudden, painful loss. News about Essa, Kelsea and Savannah shocked and overwhelmed their families, friends and community.

Train crews also mourn the loss of life, carrying a unique struggle caused by witnessing catastrophic accidents. These employees immediately are put in contact with support programs to help them cope. Many respond well, others struggle for years and a few never return to work.

When train accidents involve children, train crews, dispatchers, managers and everyone in their work units have to catch their breath to process the news. John and Michael had teen daughters themselves, personalizing the tragedy weighing on their shoulders. While both men experienced the same accident, their reactions were very different. 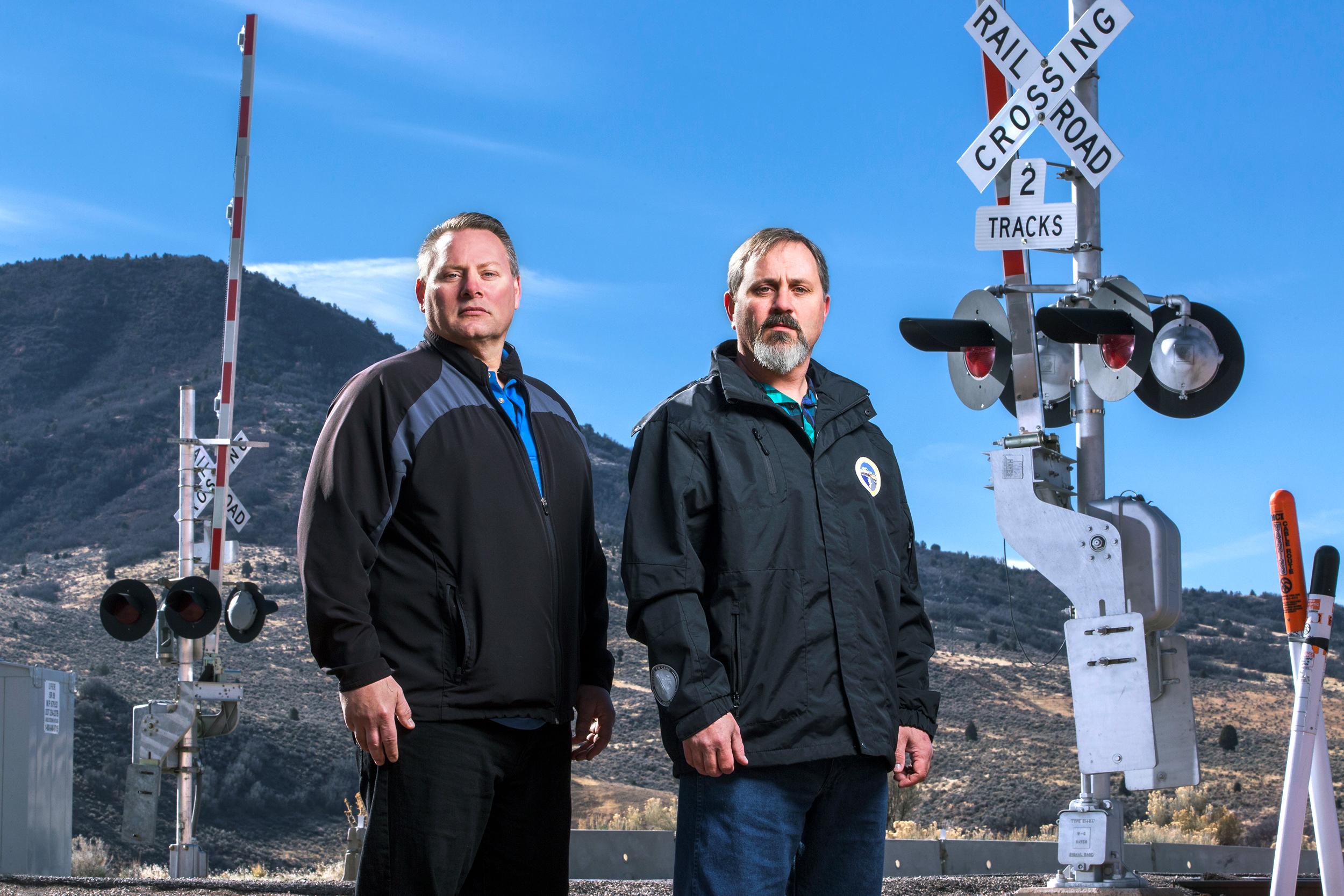 Conductor John Anderson and Engineer Michael Anderson desperately tried to get Kelsea, Essa and Savannah’s attention. They were unable to stop the train before hitting the teenagers.

Michael went home without speaking to John and did not say much at home either. His wife took his lead and sat with him in silence, no questions asked. There's an unexplainable heartbreak reserved for locomotive engineers sitting in the driver's seat and at the controls of a train that hits a child who dies. Michael saw blonde hair and jackets blowing in the wind and helplessly watched an unthinkable tragedy unfold. He thought about it all day and experienced vivid and persistent nightmares at night.

"What happened was very intense and I have to carry it the rest of my life," said Michael, who never compared notes with his conductor. "I don't know what John saw that night and I don't want to know what he saw that night."

Doctors in a Salt Lake City-area hospital discovered Savannah had more than a dozen broken bones, internal bleeding, blood clots and a severe brain injury. The 13-year-old's injuries were too great and she died three days after the accident.

Life was never the same again. Not for the parents who buried three girls with big smiles and bright futures. And not for the men who silently mourned the same children.

The crew's railroad family welcomed the men when they returned to work. Co-workers were supportive and stressed the accident was not their fault. John found comfort in talking to co-workers, which slowly released the accident's strong grip inside him. Michael did not talk about the accident, and his fellow railroaders respected his space. The locomotive engineer recently became a peer support volunteer to help train crews who experience traumatic incidents.

Asked what he'd say to teens thinking about taking selfies or any photo near railroad tracks, Michael responded, "I'd tell them to stay away from such a dangerous area. Think about the pain it would inflict on their families if things went wrong. It also hurts the train crew, the first responders and the many people who love you."

“No one should have to go through this and I hope people will seriously think about the campaign’s rail safety message and share it with their loved ones.”

"The accident that took my daughters' lives was preventable and a good illustration of how close a train can be without hearing it," said Kelsea and Savannah's mother, Jayna Webster. "No one should have to go through this and I hope people will seriously think about the campaign's rail safety message and share it with their loved ones."

Union Pacific’s railroad safety campaign encourages pedestrians and drivers to use caution near railroad tracks. A series of YouTube, Pandora and Facebook ads address risky behaviors that contribute to accidents, including a second set of videos that ask, “What is your life worth?” One, titled “Curfew,” features a teenage boy racing to get his date home before curfew and trying to beat an oncoming train at a railroad crossing. A second ad, titled “Interview,” depicts a woman contemplating driving around crossing gates so she can arrive on time to her job interview. In each scenario, drivers hit the brakes and stop just before the train continues through the crossing. It is at that moment they realize their life was worth the wait.