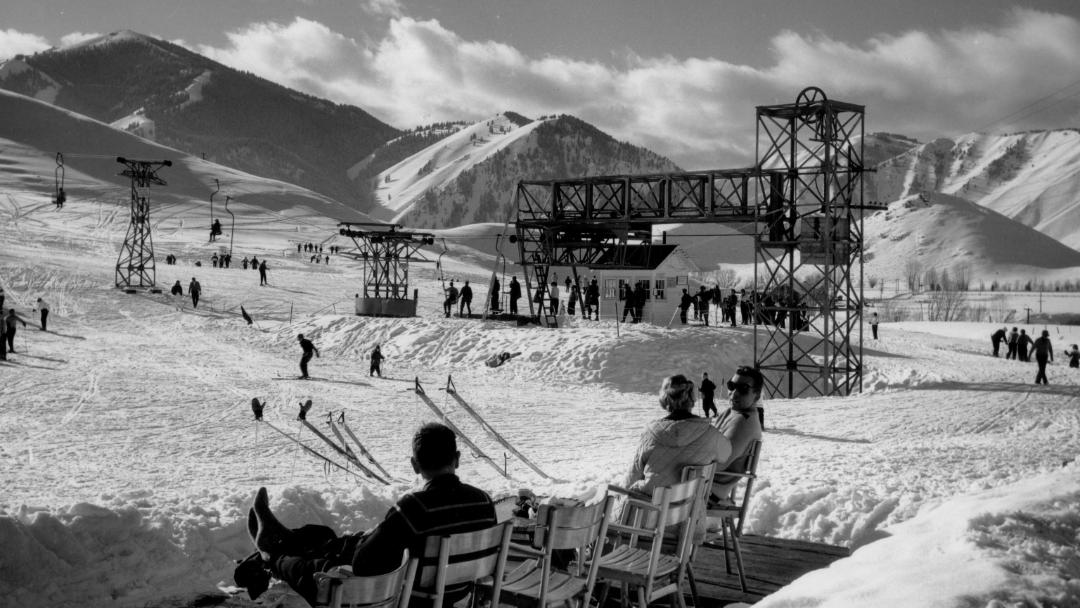 The new chairlift in operation on the slopes, Sun Valley, Idaho, 1937.

In 1936, in hopes of boosting passenger travel on its rails, Union Pacific built a ski resort in Ketchum, Idaho, called Sun Valley Resort. In those days, skiers relied on tricky rope-tows to access the top of a mountain. During the resort’s planning stages, Union Pacific’s Chairman of the Board, Averell Harriman, thought the destination could lure more visitors by offering a safer, faster way to get skiers up the slopes. He asked the railroad’s mechanical engineers to develop something new.

Union Pacific’s James Curran, an Omaha-based Engineering Department employee, had previously worked for Paxton Vierling Steel in the Gulf ports. There he watched pulley systems hook bunches of bananas and haul them to the dock. Curran figured hauling bananas and hauling skiers was not all that different – limit bruising and try not to drop them. 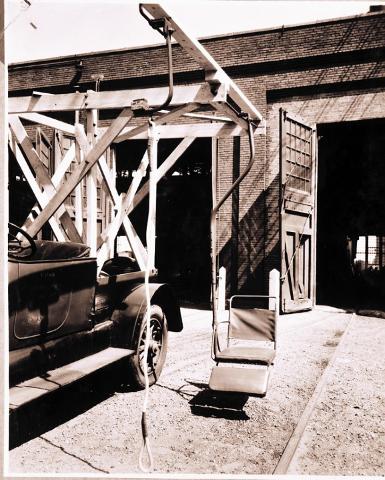 The prototype of the first chairlift tested on the streets of Omaha, Nebraska.

Curran had only a few months to engineer, build, test and install his idea for a completely new kind of ski lift that used chairs. He built a prototype in the back of a pickup truck and mounted a pair of skis onto roller skates. Testing on Omaha streets, a co-worker would slowly drive the truck alongside Curran until the chair met the back of his knees. Curran would roll forward on the skates until he settled gently into the seat. After trying it himself, Harriman declared it a success.

When the Sun Valley Resort opened in December 1936, Life Magazine featured the remarkable new ski chairlift – it quickly became an iconic image of Sun Valley, and the technology spread across the globe.

The Union Pacific Museum, located in Council Bluffs, Iowa, houses archives of Union Pacific’s destination operations from Sun Valley to the western National Parks. These include original records, blueprints, films and images that can’t be found anywhere else.

Learn more about how and why Union Pacific opened a ski resort by visiting the museum’s newest exhibit, open now through August.

Inspired by this history? You can be part of the Union Pacific Railroad Museum story: Join today as a patron or volunteer! 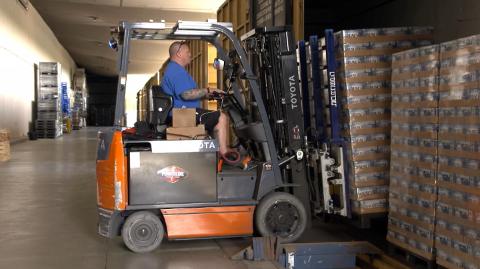 Back in the 1880s, Anheuser-Busch founder Adolphus Busch pioneered the use of refrigerated rail cars to transport the company’s product. More than 100 years later, the brewery is returning to its rail roots in a big way in 2023, with the help of Union Pacific Railroad.