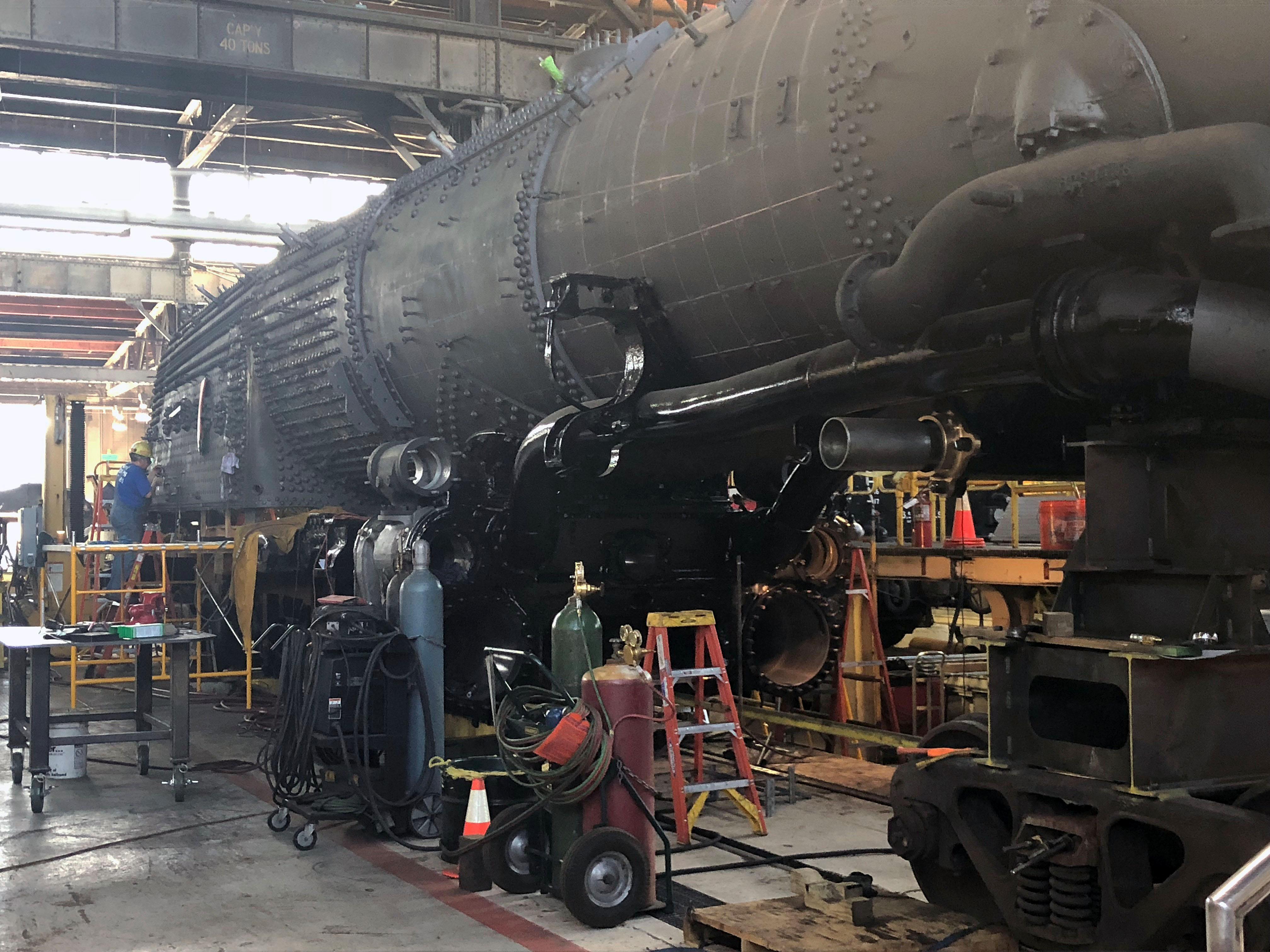 Union Pacific’s Steam Team has a new boring process that is anything but boring. Used to restore steam locomotive No. 4014’s main cylinders, Ed Dickens compares the 1930s-era “boring bar” to a spider.

“It’s a three-arm tool holder that rotates the Carbide cutters — replaceable tools that cut metal,” said Dickens, head of the Union Pacific Steam Team. “The bar hasn’t been used in over a generation. Now we’re putting it to good use.”

All together, the “Underwood portable boring bar” is used to accurately bore the cylinders, making them round again. “If you can imagine how the inside of your automobile engine looks, you would see a smaller version of cylinders in your car’s engine,” Dickens said.

The cylinders house pistons that provide mechanical power driving the locomotive. They slide back and forth, harnessing the steam energy. Over time, the pistons wear the cylinder liner.

“Just like when you’re driving your automobile, the oil in your engine is lubricating those pistons and cylinders. Eventually the cylinders will wear and you’ll need to rebuild the engine. It’s the same process with a steam locomotive,” Dickens said.

When they started the process, the boring took almost an entire day — up to ten hours — and involved a machine operated by a 1930s-era pneumatic motor, or a motor driven by air. So, the team — including machinists Bruce Kirk, Garland Baker and Foreman Austin Barker — came up with a solution: an improved pulley system. This solution changed the inward feeding pressure of the boring bar as it rotated around the circumference of the cylinder’s diameter. The system ensures better accuracy and surface finish of the final cut.

“Originally it took a solid six hours to make one cut. With the pulley process, we were able to get one cut in less than two hours,” Dickens said. “By increasing the speed and adjusting the tool feed rate, the surface finish was very nice. The result is a better run-in process when we begin to test run the Big Boy.”

Another recent project was making repairs to the cab. During the steam locomotive era, American Locomotive Company designed and built the cabs with a riveted construction process. “It was necessary to replace the bottom two thirds of the cab by using those very same techniques," Dickens said. 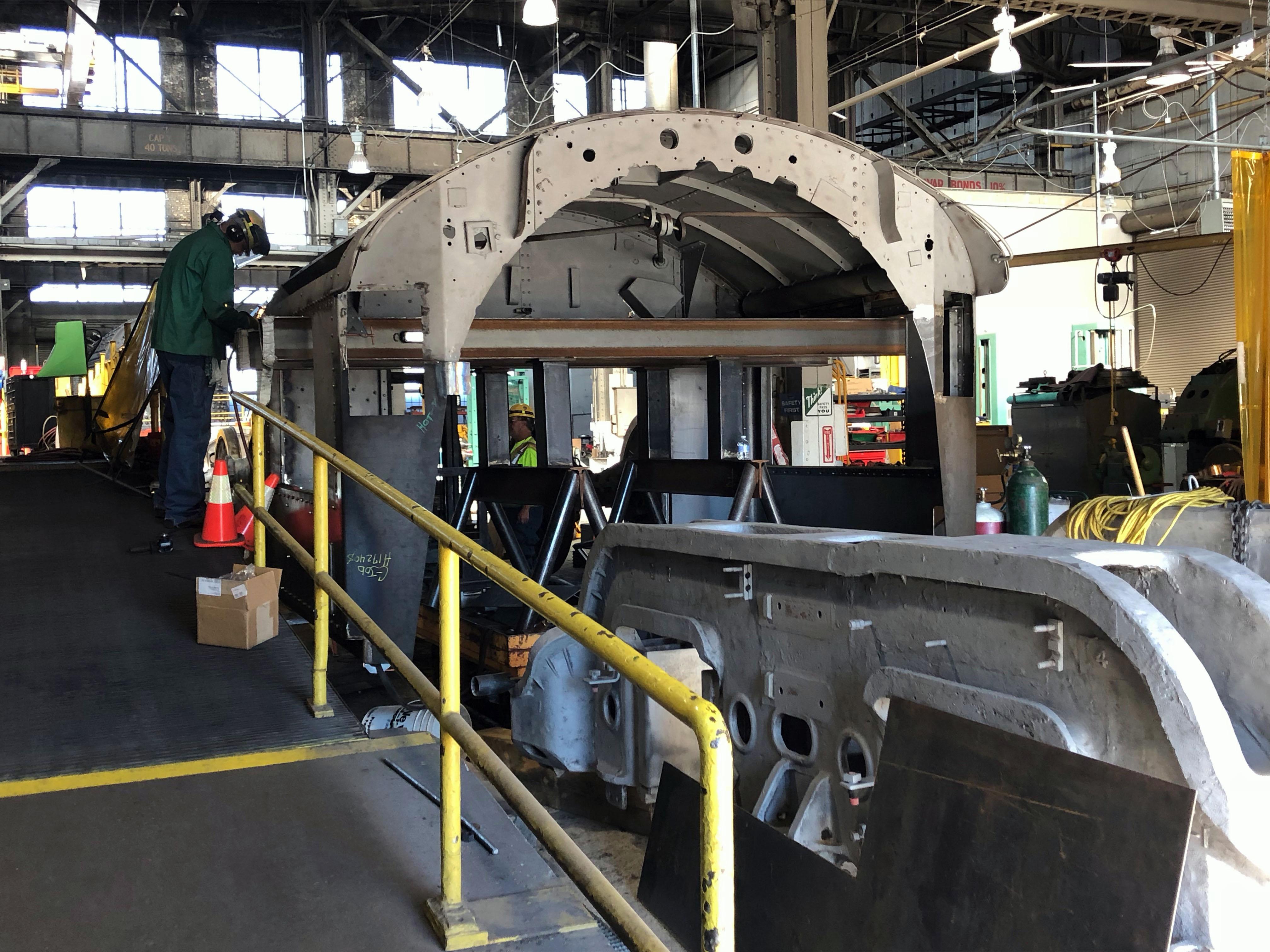 In the 1920s and ‘30s, welding was still in its infancy, so riveting was the main method of construction. “Back then, many things that are welded today were riveted together, from bridges to automobiles,” Dickens said.

He says the riveting process is simple. First, identical holes are punched into two sheets of metal. Then, the holes are lined up and hot rivets are installed with a rivet tool. “The smaller the rivet, the easier it is to drive,” Dickens said.

The team had to replace the bottom two thirds of the cab with new metal due to rusting between the metal sheets. “If the rivet lines look puckered and dimpled, it means the rust is actually expanding and forcing the metal apart,” Dickens said.

Up next is the final restoration of No. 4014’s boiler, which Dickens says is the most important part of the locomotive. “It’s a tremendous pressure vessel of immense power,” he said. “The boiler has to be 100 percent as we test it and place it back in service.” 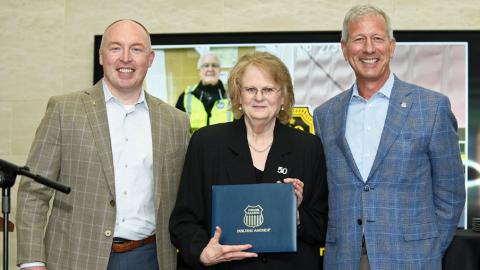