Railroad Crossings in our Communities 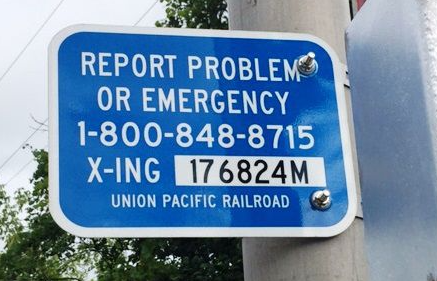 How do I report malfunctioning gates and warning signals?

Who Decides Where Active Warning Signals Are Located?

One of the commonly held misconceptions is that railroads decide where and what types of railroad warning signals are installed at crossings.

In reality, the process is governed by a federal program since crossing signals are defined by the Federal Highway Administration as highway control devices, not railroad signals.

Railroad crossing signal installations and signal upgrades primarily are funded by federal safety funds, originally through "Section 130 funding," but more recently under other titles. The states receive an allocation of federal money each year for grade crossing improvements.

Each state is tasked to develop a system to determine a priority list for crossing safety improvements based on various factors. While states have different budgets and formulas to prioritize crossing improvements, they generally consider the following.

Once a state determines which crossings are to be upgraded, it contacts the railroad, which meets with state and local representatives on site to review the project. The process is defined as a "diagnostic review meeting." The railroad then designs the circuitry for the specific crossing and determines a cost estimate. The state reviews the estimate and once it approves it, issues an agreement to the railroad to install the desired signals.

Costs for signal installations will vary depending on the complexity of the crossing and the sophistication of the equipment needed to meet the desired safety levels.

Ultimately, of course, the safest crossing is no crossing. An on-going goal of the railroad is to close redundant crossings.

In areas where grade separations - either underpasses or overpasses - are planned, funding methods vary. The cost can vary depending on the complexity of the site.

Why Do Engineers Sound Train Horns?

Federal rules require train crews to begin sounding the horn at least 15 seconds before entering the crossing and to continue sounding the horn until the engine crosses the roadway. Locomotives are equipped with a triangle of bright headlights, one mounted high and centered, and two on each lower side of the front of the locomotive. They are illuminated night and day when the train is in motion.

What is the history behind railroad crossing warning systems?

Highway-rail crossing warning system technology dates back to 1870 when the track circuit was invented. The idea of using electric current in railroad rails for signaling was an idea that had been suggested as early as 1848. By dividing the railroad into "blocks" or sections, a circuit was devised to signal trains when a specific section of track was clear or occupied with other trains.

As America became laced with more railroads in the latter half of the 19th century, it became apparent that warning also should be given to people who wanted to cross the tracks. Initially, a colorful variety of signs were posted at crossings, depending on the whims of the local railroads, and in time, watchmen were stationed at the busier crossings to warn of approaching trains. Some of the crossings were equipped with gates that the watchmen manually cranked to lower or to raise.

As it wasn't practical to have people stationed at all the crossings, a way was sought to automatically alert the public that a train was approaching.

The Stalwart Safety Sentinels of the Road

By the 20th century, the use of "cross-buck" signs – the boards forming an "x" – were common. The design formed the basic sign still in use today.

The first automatic crossing signals were bells mounted atop poles. They were activated when a train entered a circuit where the rails were insulated to confine the electric current to a designated piece of track. The current flowed through the steel wheels and axles of the train, cutting off (short-circuiting) electricity to an electrical relay which needed the power to hold the electrical connection apart that kept the bell off. When the electricity was diverted through the train – which was a path of lower resistance – instead of the relay connection, the contacts connected and the bell rang.

The electric bell idea quickly was expanded to include a swinging round sign with a red light hanging from an arm on the signal pole to simulate a flagman waving a red lantern. Such "automatic flagmen" signals were soon dubbed "wig wags." A few wig wags remain in use today in the United States, much beloved by railfans for their nostalgic warning.

Today the basic designs come in a wide variety of configurations, depending on the complexity of the street crossing and the railroad. Each one is custom designed to fit a specific need.

Most crossing gates are designed to warn against motor traffic in the oncoming lanes, covering half the street, allowing an escape from the tracks for motorists who happen to be on the crossing when the signal is activated. At some crossings, a "cantilever" extends out above the street with additional flashing lights to warn motorists in multi-lane situations.

Many modern crossing signals have "constant warning" technology which not only allows for the warning time, but adjusts to the speed of the oncoming train to give the same amount of warning, regardless of whether or not the train is moving slowly or very rapidly. The goal is to give adequate warning, but not too much time that would encourage motorists to disregard the signal.