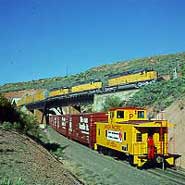 Cabooses became a uniquely American tradition. Overseas, their use had been rare or eliminated many years before. Even in the United States, technological change began eliminating the need for cabooses before the turn of the century.

The spread in the 1880s of the automatic air brake system invented by George Westinghouse, eliminated the need for brakemen to manually set brakes. The air brakes soon were followed by the use of electric track circuits to activate signals, providing protection for trains and eliminating the need for flagmen. Friction bearings were replaced by roller bearings, reducing overheated journals and making visual detection by smoke an unlikely event.

Trains became longer, making it difficult for the conductor to see the entire train from the caboose, and freight cars became so high that they blocked the view from the traditional cupola. The increasing heaviness and speed of the trains made on-board cooking hazardous and unnecessary. New labor agreements reduced the hours of service required for train crews and eliminated the need for cabooses as lodging. Cabooses, when used at all, were drawn from "pools" and no longer assigned to individual conductors.

Eventually, electronic "hotbox" and dragging equipment detectors, which would check moving trains more efficiently and reliably than men in cabooses, were installed along main lines, and computers eliminated the conductors' need to store and track paperwork in the car. 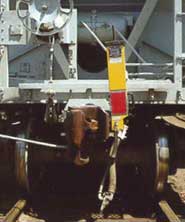 Today, the ends of freight trains are monitored by remote radio devices called "End of Train" devices, or EOTs. The small boxes fit over the rear coupler and are coupled into the train's air brake line.

A Brief History of the Caboose